21 Finns travelled to Christchurch Sailing Club over the Jubilee Bank holiday Thursday and Friday, for the culmination of a packed May programme of top Finn racing.

After a briefing and warm welcome to the club from race officer Paul Butler, the sailors launched and made their way down the picturesque Christchurch Harbour and out into the bay.

The 10-knot breeze was scheduled to build from the east and gradually move to the south during the day.

A windward-leeward course was set and the race got away first time, it was clear that Lawrence Crispin (Stone & Thorpe Bay YC) had selected the correct settings with an impressive turn of boat speed both upwind and downwind, taking the first race from John Heyes (Warsash & MRSC) in second and Allen Burrell (TBYC) in third

The Oscar free pumping flag was up for the start of the second race and soon after the start those competitors at the pin end locked into and left-hand shift, giving them an advantage over those who chose the committee boat end of the line. Lawrence Crispin took the win again, this time from Andy Couch (Blithfield sc), and Alex Atkins in third on his home waters. 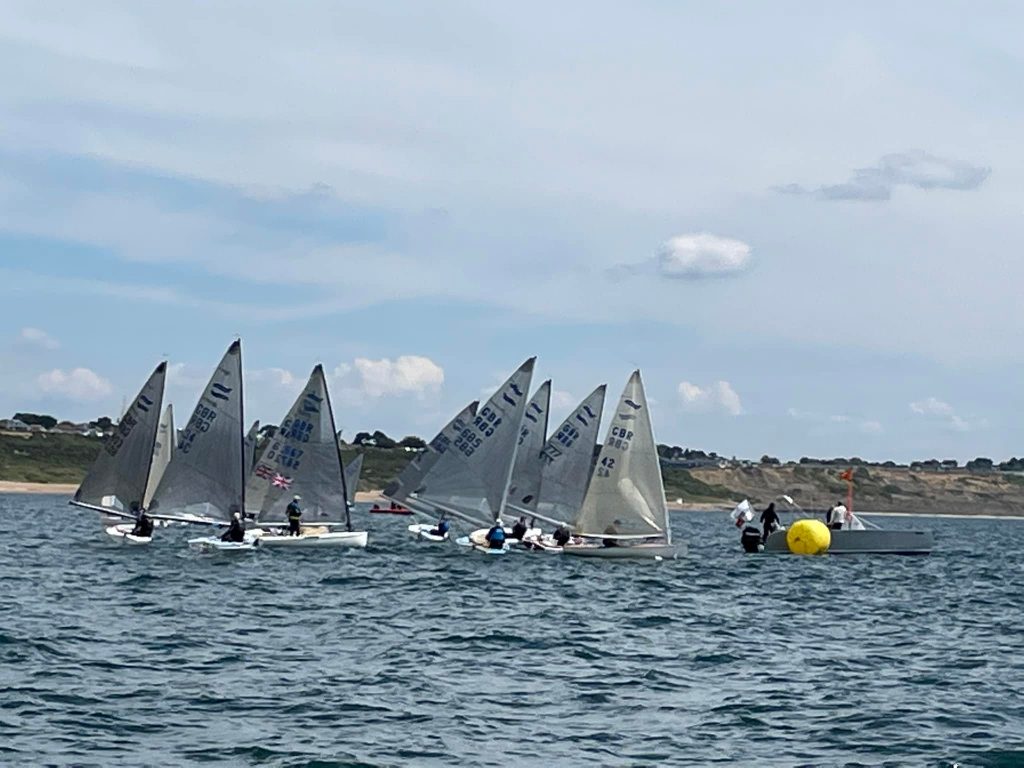 By now the condition were pretty much perfect –  bright sun ,12/14 knots of breeze and waves making for some champagne sailing for the fleet.

The third race again got away although Andy Couch was OCS much to his disappointment! Once again Lawrence Crispin built a substantial lead which he extended through to the finish from Allen Burrell and Simon Percival (Christchurch SC) in third

The forecast for Friday was for light and unsteady breeze so the PRO took the right decision to lay on a fourth race much to the delight of the fleet given the conditions were certainly 10/10! With the wind now pushing 14 knots and some tasty waves building to make downwind surfing a thrill, the final race got underway. With the tide beginning to swing, the options upwind became more even, but in what was becoming a procession for Lawrence, he again took the win from Allen and Andy Couch made up for his OCS in the previous race with a third place. 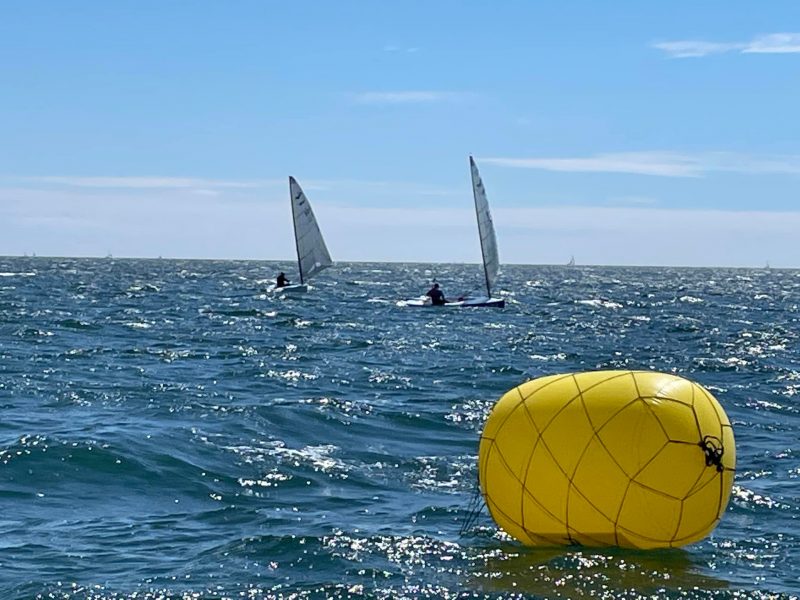 The fleet then surfed back to the club with some huge grins to cap off an absolutely perfect day on the water, with many saying it had been the best day’s sailing so far this season, despite the aching legs and arms from all that free pumping!

The forecast for Friday was light but with the pressure off the race team to only get two races in the fleet set off again down the harbour and out into Christchurch Bay, and loitered around the committee boat waiting from the breeze to stabilize

The fifth race got away and in a similar story to the second race the day before a left-hand shift with more pressure benefitted those starting from the pin end. Martin Hughes (Warsash SC) had a fast start, reaching with speed towards the pin, taking full advantage of working the left of the beat which proved the edge to take the win from Lawrence in second place. A welcome return to the top of the fleet for Tim Carver (Warsash SC) who sailed well to claim third place. 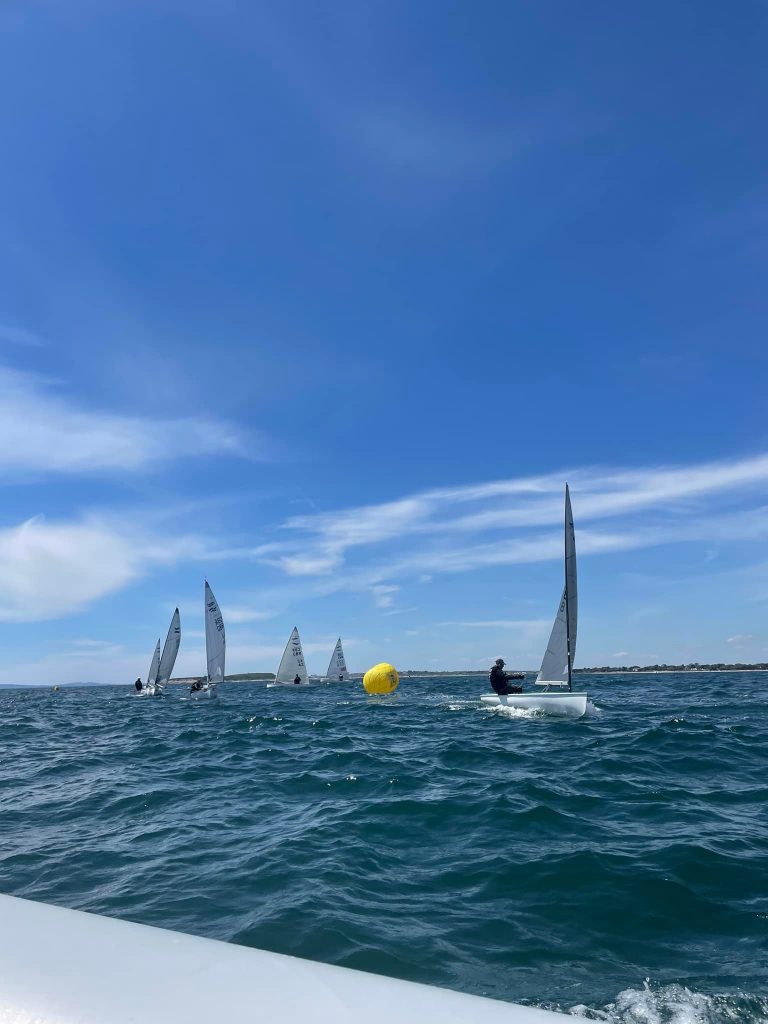 The last race of the meeting got away shortly after, unfortunately the north-easterly breeze had different ideas and on the final lap shut down and the wind swung dramatically to the south, flipping the fleet around somewhat and dumping some of the leaders inshore. Alex Atkins stayed calm though to claim a much-deserved win from Roman Khodykin (MRSC) and Martin Hughes slipped into third place to rocket himself up the standings.

The fleet drifted back to the club through the idyllic harbour setting, for the presentation. Lawrence Crispin was crowned the clear winner and first Grand Master from Allen Burrell in second place overall and Martin Hughes in third overall, who was also the first Great Grand Master. Alex Atkins in overall 5 place was the first Master and the first Legend went to the evergreen Howard Sellars (Warsash SC) in fourteenth place overall.

Lawrence thanked the race team and the Christchurch club for hosting a great event and Russell New for providing very welcome cold beers on the dock for the sailors to enjoy and toast the memory of his father, Ray New, who sadly suddenly left us in February. We all look forward to returning to Christchurch next year for the BFA UK National Championships in July. 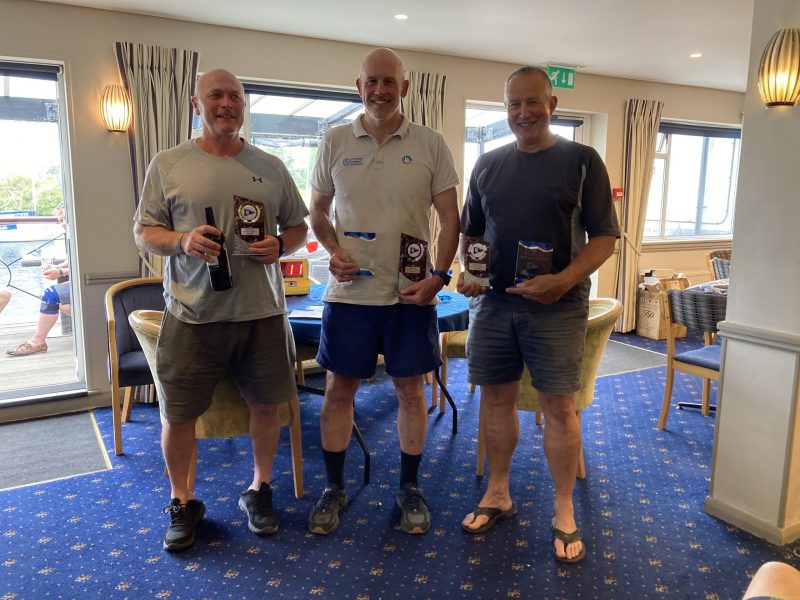