15 Finns signed up for the first of the BFA Spring One Day Open Series, the first racing of the 2022 season. Designed as an early Spring ‘sharpener’, the weather proved a little sharper than forecast, resulting in just 12 boats heading out for the start of the first race, in a fresh to frightening 18-25 knot chilly Northerly! However, the hardy 12 represented the cream of the UK fleet, keen to get into training for the new season and test new gear.

Race Officer Robert McDonald braved the freezing conditions in the open committee boat to set a good length windward/leeward course in the gusty northerly coming off Thorney Island, in scenic Chichester Harbour. Out on the racecourse, the neighbouring fleets of Optimists and Teras put the conditions into context, helping the Finns to ‘man up’ and get on with it!

Race one saw the left side of the course favoured by the flood tide and a left shift. Mike de Courcy (Mengeham Rythe SC) battled it out with John Greenwood (West Kirby SC) in the front of the fleet until the second downwind saw both of them wiped out by a savage gust that up-ended both boats. Lawrence Crispin (Stone SC & TBYC) timed his gybe to avoid the maelstrom to round the leeward mark safely and cross first ahead of Allen Burrell (TBYC) and Dan Belton (Mengeham Rythe SC). 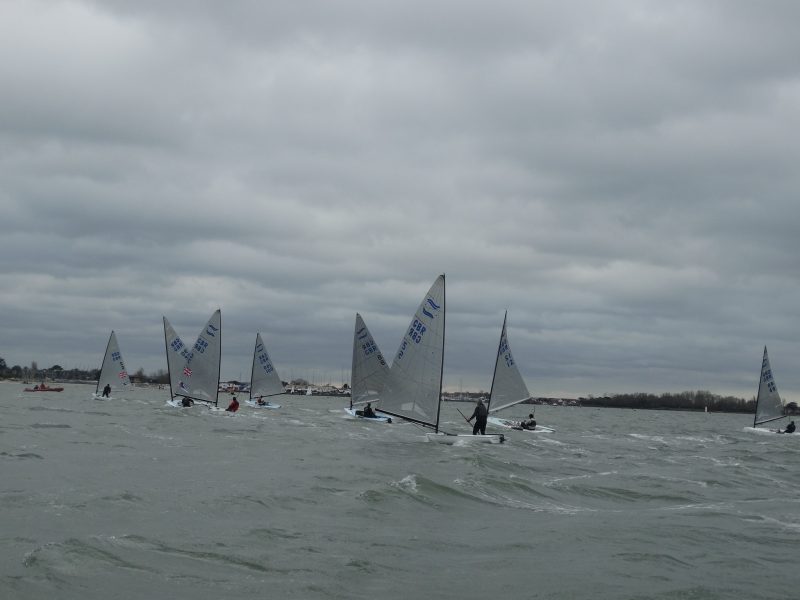 A quick turnaround got race two underway, but John Greenwood was forced to retire with a boat full of water and Mike de Courcy decided to retreat to the warmth of the clubhouse. Lawrence Crispin, enjoying the benefit of his new fitness training regime again took the lead, this time chased hard by Matt Walker (Mengeham Rythe SC) who found his stride to hold out Burrell to the finish and Richard Sharp (Bough Beech SC ) in 4th.

Several boats made use of the discard for the chilly third race, leaving just 7 hardy souls to line up for the final race. With the tide now turned, the right-hand side of the course was favoured upwind, but just as the sea state had flatted off with the high tide, the wind proved even gustier, with 25-knot squalls coming through on the run, benefitting those on the right of the downwind. 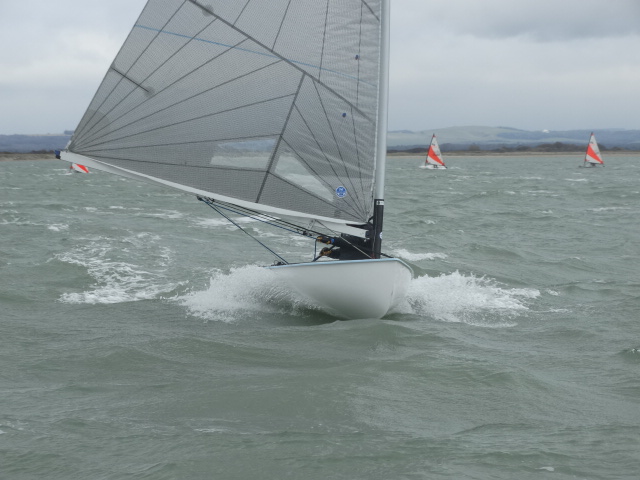 Crispin and Burrell again fought it out at the front, with John Heyes in third until the James Downer (Gurnard SC) and Richard Sharp proved that weight is important in the breeze and cruised past upwind. A ferocious gust hit the fleet halfway down the final run, just as most were about to gybe. Heyes’s boat was picked up in a sudden broach to windward which he used to turn into a quick tack and bear away, just managing to head deep enough to make the leeward mark ahead of Sharp and Downer who waited for a slightly more opportune moment to gybe or ware round. Tim Carver marked his return to the UK racing circuit with a consistent 8, 5, 6 scoreline, and Dan Belton impressed with his 3, 5, 7, results. 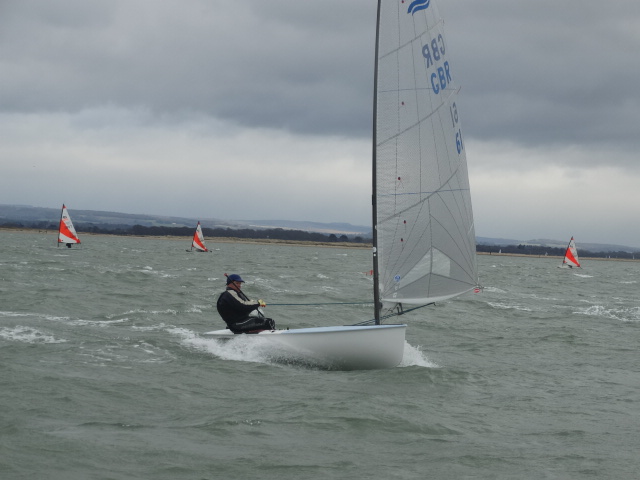 The remaining fleet gratefully headed back for a warm shower and soup provided by the club, elated to have tamed the conditions and to the efficient Mengeham race team for the quick turnarounds and great racing. The BFA Spring Series continues on April 16th at Warsash SC, followed by Bough Beech on 2nd April and concludes at Burghfield SC on 23rd April.