Conditions were varied for the first race held in 12-15 knots and rising to 18-22 knots for the second race, it was a tough day for the Masters fleet, but the smiles as the fleet crossed the finish line said it all – satisfaction and elation after a great day of sailing.

Felipe Silva (POR) was the early leader in Race 1, chased by two Germans, Uwe Thielemann and Andre Budzien. Thielemann took the lead on the first reach and led all the way to the finish to win from Budzien and Silva. However Thielemann was scored UFD, handing the win to Budzien, who was sailing on his home waters. 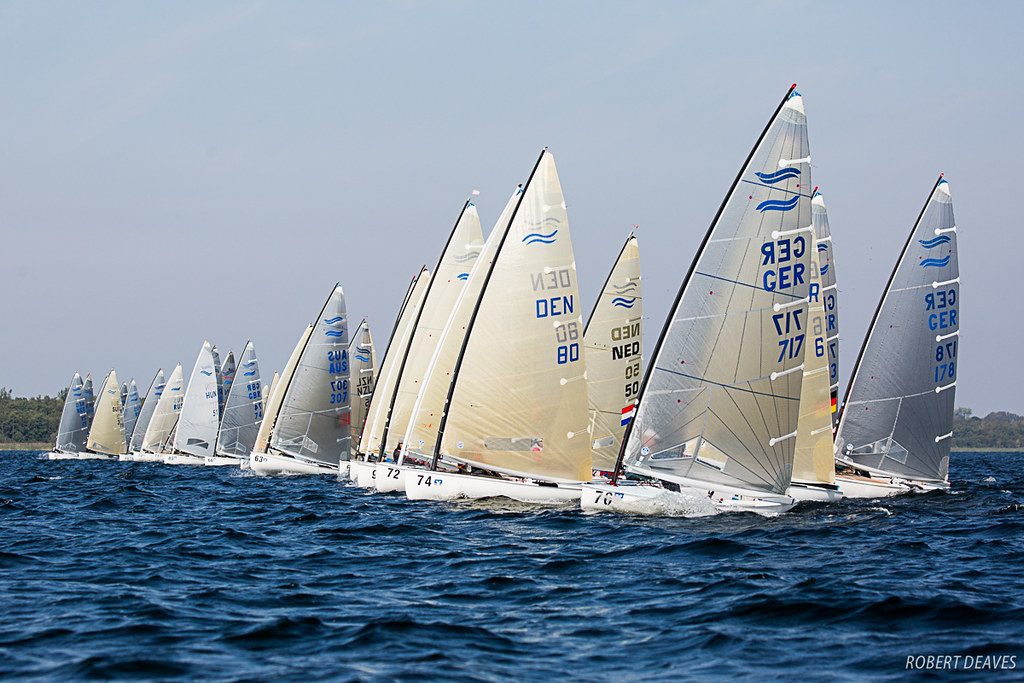 The wind increased for Race 2, with some great downwind sailing. Thielemann executed a fantastic port end start; well it would have been fantastic, but he picked up a second UFD. Thomas van den Berg, from The Netherlands led at the top from Ricardo Santos, from Brazil and the two extended on the fleet, with Budzien catching them up in the latter stages. On the second lap the wind increased to 20 knots and apart from a few capsizes, the fleet handled the conditions well. Santos passed van den Berg on the final downwind to lead into the finish, but, with many boats on the edge of control, he then tried to take out the committee boat, though he inflicted more damage on his own boat. He rerounded and finished ninth, while van den Berg crossed in second, but was UFD, as was Budzien, which left Silva as race winner and overnight leader. 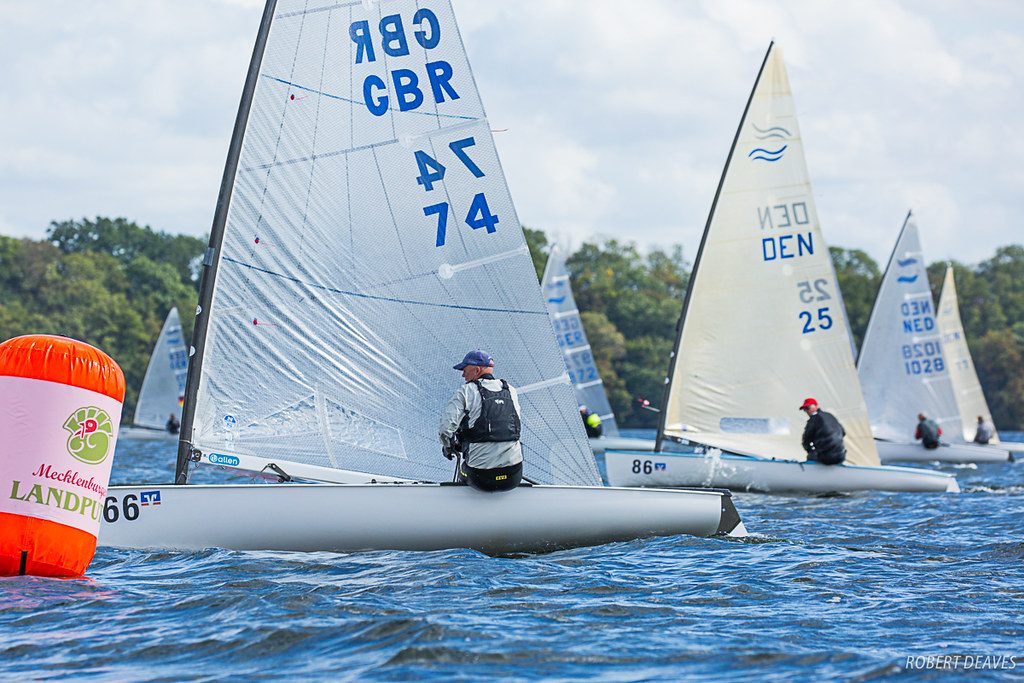 BFA member Lawrence Crispin had a mixed day, scoring a 7th & 18th to end the day 7th overall, level on 25 points with 4 others.

On day two conditions were more benign than on Wednesday, dropping to 4-5 knots at some points but at other times there were enough gusts to catch out the unwary, with a few sailors testing the water temperature in Schwerin Lake. During the day the wind varied from 4 to 15 knots and everything in between, with larger shifts and more than few clouds passing overhead.

De Waal was the early leader in Race 3, rounding the top mark with a nice lead and sailed away from the fleet for what seemed like a certain race win. On the first downwind excessive cloud activity sucked away all the breeze and the fleet drifted down to the gate in 4-5 knots. Though de Waal led at the gate, Silva was applying pressure and on the second upwind, took the lead, but de Waal passed him again on the outside in more pressure just before the final mark ahead to lead into the finish. Maier crossed in third after a big recovery on the first beat.

Maier was back on the water on Thursday after carrying out a delivery trip for Finns heading to Melbourne for the Gold Cup in December. After being squeezed out of the start in Race 3, the six time World Masters champion made a better job of it in Race 4 and rounded the top mark just behind Lawrence Crispin. He took the lead on the first reach to extend on the fleet on each leg for a comfortable win. Andre Budzien, from Germany, took quite a few places on the final downwind as the breeze returned in force, while Ricardo Santos, with a newly repaired boat crossed in third. 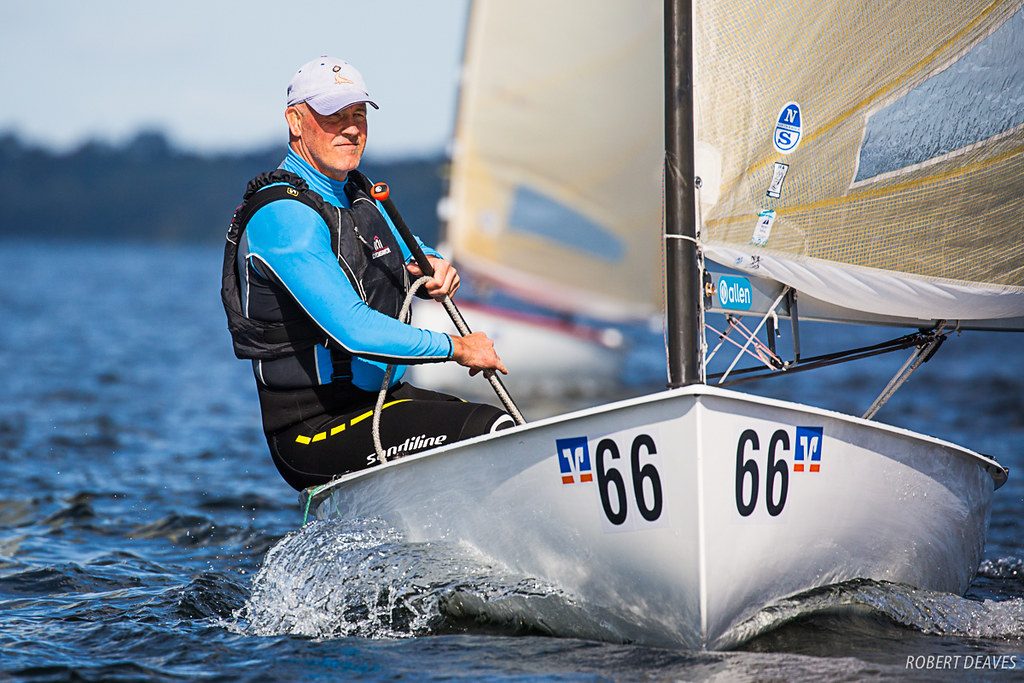 Crispin moved up the fleet with a consistent 11 and five, edging him up the leader board to 5th overnight. Simon Hoult (GBR 19) had his best result of the series with an 18th in race 4.

Micheal Maier led from the start in Race 5, winning the pin and leading the fleet up the middle right. Silva rounded in second but downwind Budzien came through to round the opposite gate mark level with Maier. Maier escaped up the second beat to lead down to the finish with Budzien close behind again. Silva crossed in third.

Race 6 followed a similar pattern with Maier and Budzien fighting for the pin and then fighting for the right. Lawrence Crispin, from Britain, led round the top but lost pressure downwind with Maier and Budzien again pulling through to round the gate together. Maier stretched out on the second upwind while Budzien dropped back on the left. Crispin recovered to second at the top and followed Maier down to the finish with Allan Hansen, from Denmark, making gains on the second upwind to cross in third.

Saturday was always forecast to be the lightest and trickiest day of the championship and so it turned out to be. The race officials worked tirelessly to reset the course and move marks to each new wind direction, but it took more than two hours waiting to get Race 7 away and the first attempt at that was abandoned half way up the first leg after a huge wind shift. 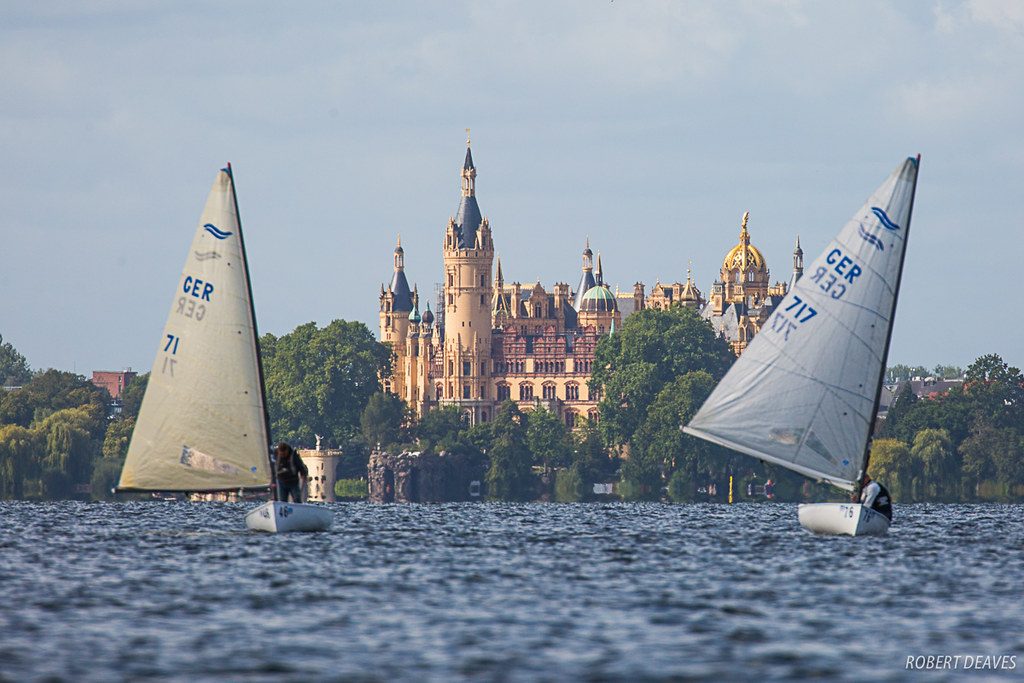 The next attempt got away first time with Felix Denikaev (RUS) leading the fleet around the top mark from Antal Székely from Hungary and Lawrence Crispin. Székely led at the gate but Budzien was catching up fast. Coming into the final mark he passed Székely and then attacked Gebhardt Zdenek, from Czech Republic just before the final mark. Zdenek fouled and after doing turns, Budizen led down to the finish line to win from Székely with Maksym Krukovskyi, from Ukraine, crossing in third.

After a further wait, Race 8 was started but the wind really wasn’t cooperating and shortly after the top mark, the race was abandoned and fleet sent back to the club. The championship was over, leaving Portugal’s Filipe Silva the clear winner from Bas de Wall (NED) and local lad Andre Budzien, who may have been rueing his 25th in race 3 and UFD – otherwise his worse result was a 4th….. 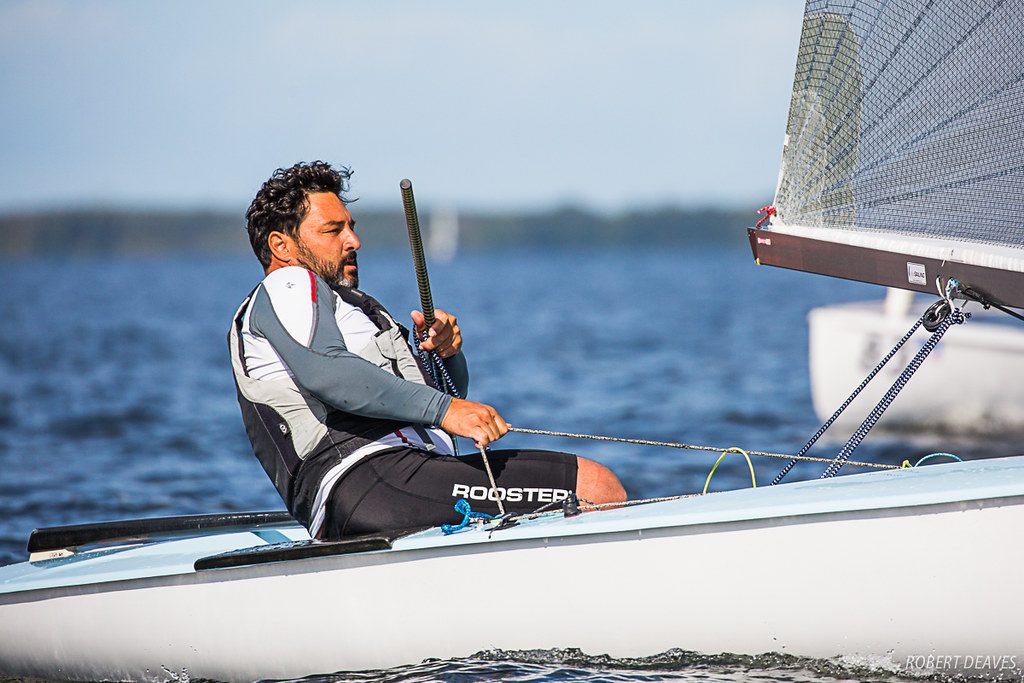 Congratulations to Lawrence who continued to improve his score with 2nd and 5th in the last two races to claim a well deserved fourth overall. His result made up for his frustrating trip to the World Masters where a cut hand in the first race ruled him out of the regatta. We look forward to some good competition between all the UK Masters at the season’s final championship at Warsash on 12-13th October – don’t miss it.