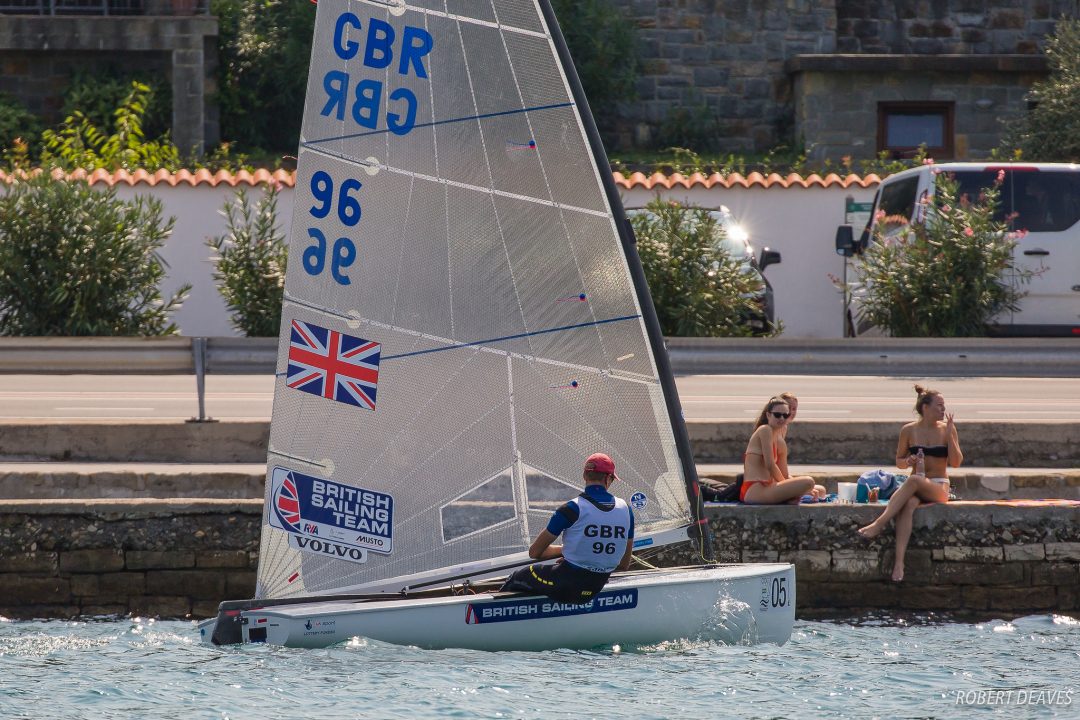 Hector Simpson found his pace on the third day of the 2018 U23 World Championship for the Finn Silver Cup in Koper, Slovenia, to win the day after taking three second places. He moves up to fifth overall, while Ondrej Teply extends his lead at the top to 10 points. Joan Cardona also had a good day after three good finishes to move up to second, while Nils Theuninck narrowly holds onto third after a day of mixed fortunes. 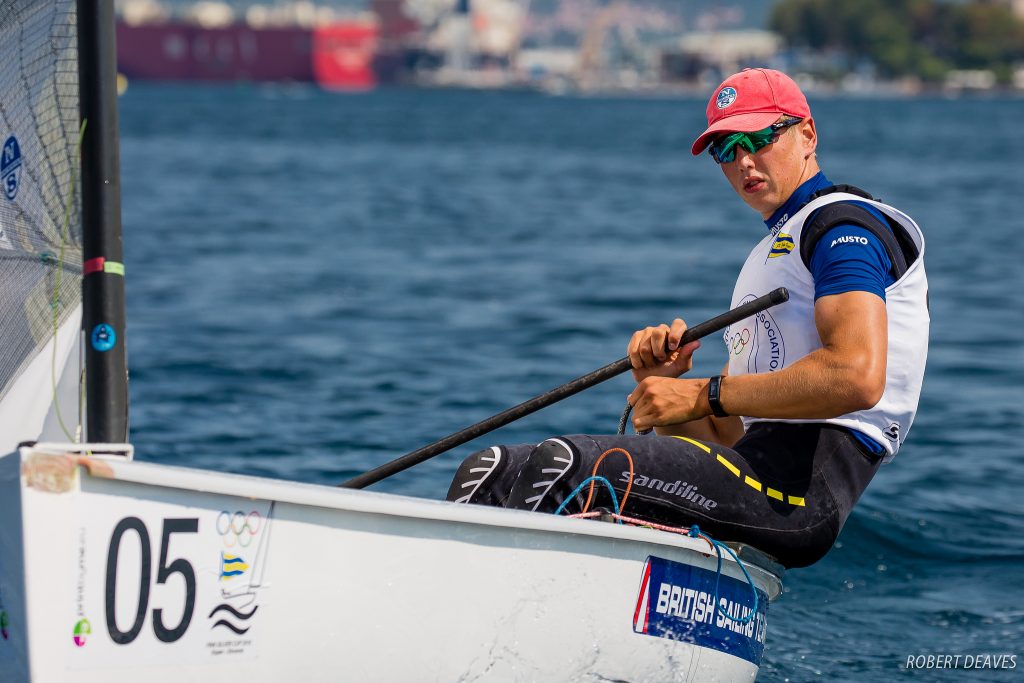 The third day of the championship was another hot and sunny day. The sailors were held on shore with a one-hour postponement to wait for the arrival of the sea breeze, which appeared to be more promising, but again never quite materialised in the way everyone hoped for, and ranged from 4-10 knots. Its direction meant a one-way track up the Koper shoreline, to find the stronger breeze and escape the current. Those who had a good line to the left always came out looking strong, though most of the fleet got it wrong at some point during the day. 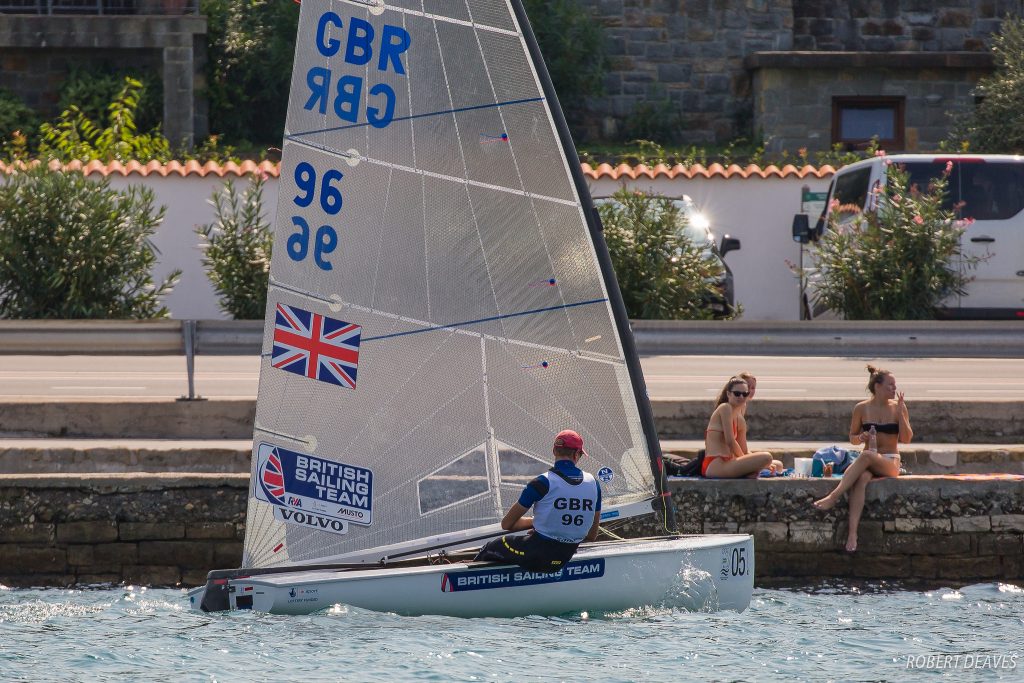 The left side of the course was popular with most sailors…….

Simpson led the fleet round the top mark in Race 4 of from Cardona and Can Akdurak. Teply was not far back and had moved into the lead downwind and held on to win his first race of the week, from Simpson and Cardona. Theuninck had managed to miss out the spreader mark, which was out of place, and later retired, which has cost him some valuable points.

Race 5 was sailed in the strongest breeze with the sailors now more aware of hitting the left shore, where the scenery was much nicer… Local sailor, Jan Orel won the pin and was first round, again from Simpson and Cardona. Simpson was ahead at the gate and lead round the final top mark. However a fitful breeze downwind let Cardona through for the win from Simpson and Orel.

The final race of the day was sailed in the lightest wind of the day with even more emphasis placed on the left. Those who got a bad start and bailed to the right paid a high price, including many of those in the top ten overall, who then spent the race trying to catch up. Sebastian Kalafarski was first round from Simon Gorgels and Cardona, but it all changed downwind with those opting for the offshore route running out of wind. In his first ever Finn event, Georgii Paches, sailed round the all and led at the gate from Federico Colanino and Gorgels. Simpson moved up to third on the final upwind and the places remained the same downwind.

The GAC Pindar BFA team had a mainly consistent day, with Cameron Tweedle hanging on to 14th OA after discarding a 32 from the 4th race, and Markus Bettum pulled up the rankings with an 11, 21, 9 scoreline. New squad member Dan Patten in his first international regatta also had a steady day with a 24, 23, 24 score. 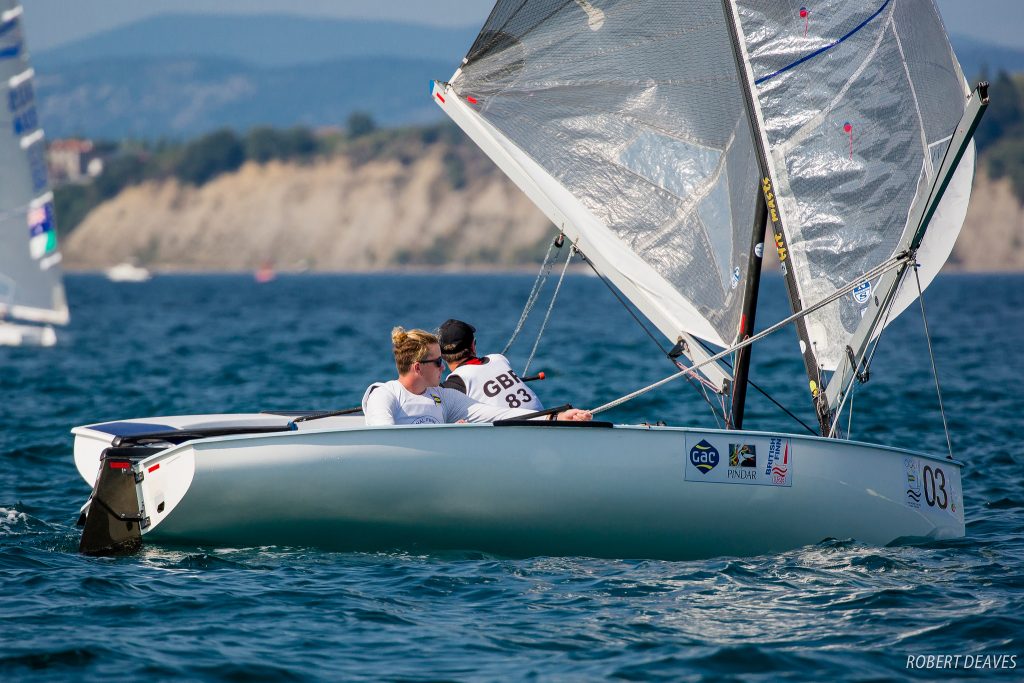 “It was all about the starts today. It was a bit garda-esque, bit of a left hand race track because there was loads more pressure on the left when the sea breeze was and a left hand wind bend, so the further boats generally came out and won, and there was very little way back into it if you didn’t have a great start.”

“The last race was a bit trickier. The sea breeze was dying so the wind had random puffs of breeze on the left but more consistent pressure on the right, so you had to make a decision whether to go left and hope there was pressure and go right and know you might not get as good a shift. So all in all, the guys on the left guys came through, but it was really tricky racing.”

On his recovery after a bad start to the week. “It’s nice to get three seconds. The first couple of days were pretty much disastrous for me. I was coming into the event hoping to win it and I basically blew that on the first day with a 20th and a 10th. I just could not get off the line and with the wind not shifting that much and being light wind you don’t have much of a speed advantage over the other guys, and I just wasn’t able to pull through. So it’s nice to get three seconds and hopefully I can do the same for the rest of the week and salvage a medal.”

After six races, there is a possible five more to sail over the next two days. None of the forecasts show much wind, so the hope remains for a solid sea breeze, especially as temperatures will remain in the high 20s.