17 Finns travelled to Harwich Town on the East Coast over the hottest May Bank holiday ever, for the second of the 2018 BFA Traveller Series.

Those that had made the trip were rewarded with bright sun, a steady 8-10 knot breeze, a great course in Dovercourt Bay and a wonderful welcome from the host club. Harwich Town proved you don’t have to be the biggest club on the circuit to run a great event and their team of willing and friendly volunteers made it a joy to attend. Race Officer Graham Ireland, assisted by Martin Pavey from Alton Water put on some excellent courses and got all the races off promptly with no hanging around.

Three Under 23’s fresh from competing in Héyres and Palma were in attendance, plus 14 Masters keen to get in some championship practice for the up-coming World Masters. 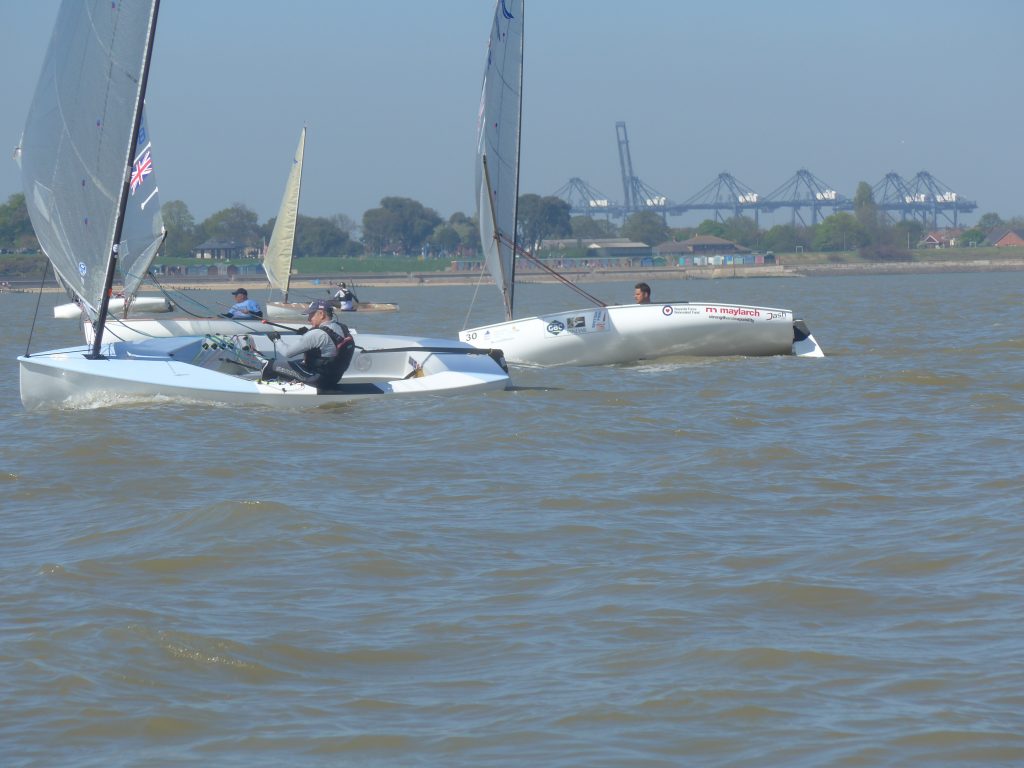 Local expert Robert Deaves revealed the way to go by taking the pin end at the first start, leading the fleet inshore, before a slowly sinking boat slowed his progress! Hector Simpson, (GBR 96) showed his form to claim first place in all Saturday’s races, but was pushed hard by two Olympic circuit sailors from a previous generation. It was great to see Lawrence Crispin (GBR 74) and Kristian Sjoberg (FIN 201) renew their rivalry after a 30-year break – and neither has lost any of their innate ability to sniff out the right way to go! The two were never far apart and took turns to finish ahead of each over. Their starts were always good, in the right place and at the right time.

Saturday evening delivered a great BBQ served up by Ady Pells and a welcome visit from Ed Wright who had been coaching nearby.

Sunday served up much of the same, the hot sun seemed likely to induce a sea breeze but the gradient 8-10 knots easterly won out. By now the whole fleet had figured out the left side of the windward/leeward course paid and a few over zealous youths at the pin triggered a general recall at the first start. The second Black Flag attempt (see photo below) made everyone line shy but the main contenders still managed to get into pole positions. Those that had attended the starting practice at the Mengeham training weekend previous obviously benefitted from James Hadden’s drills, and had remembered to take their ‘ruler’ transits. Callum Dixon (GBR 38) nailed the pin and sailed off to a good lead, only to be finally overhauled by Hector Simpson. 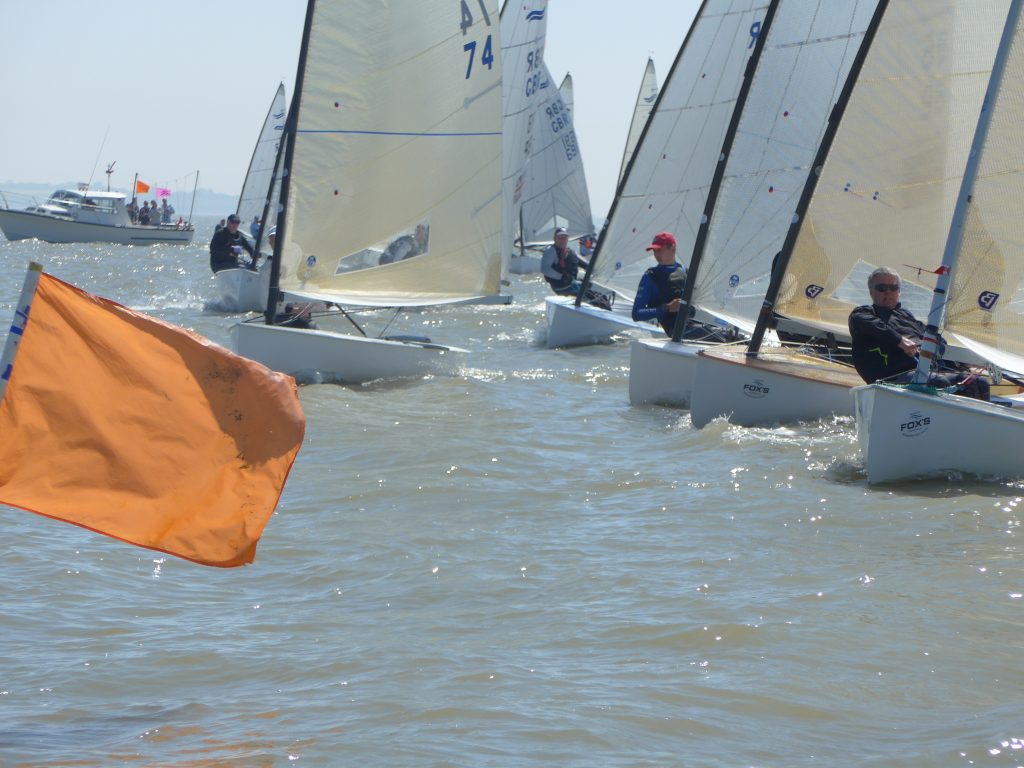 With one side of the course clearly favoured the racing was actually great practice for the World Masters, where packed start lines require sailors to hold a tight lane off the line. Those that could do so were in contention at the top mark but if you fell in to dirty air in the lightish breeze it was just like turning off the tap.

Race 5 saw Cameron Tweedle (GBR 98) break Simpson’s domination with a win, followed by Simpson in second, followed by the battling Masters Sjoberg and ex Laser World champion Crispin. The final race ran to form with Hector Simpson taking a well deserved win, ahead of fellow U 23 Callum Dixon and the consistent Kristian Sjoberg. This result was enough to give the Fin second overall, just two points clear of Cameron Tweedle and Lawrence Crispin on 17pts. 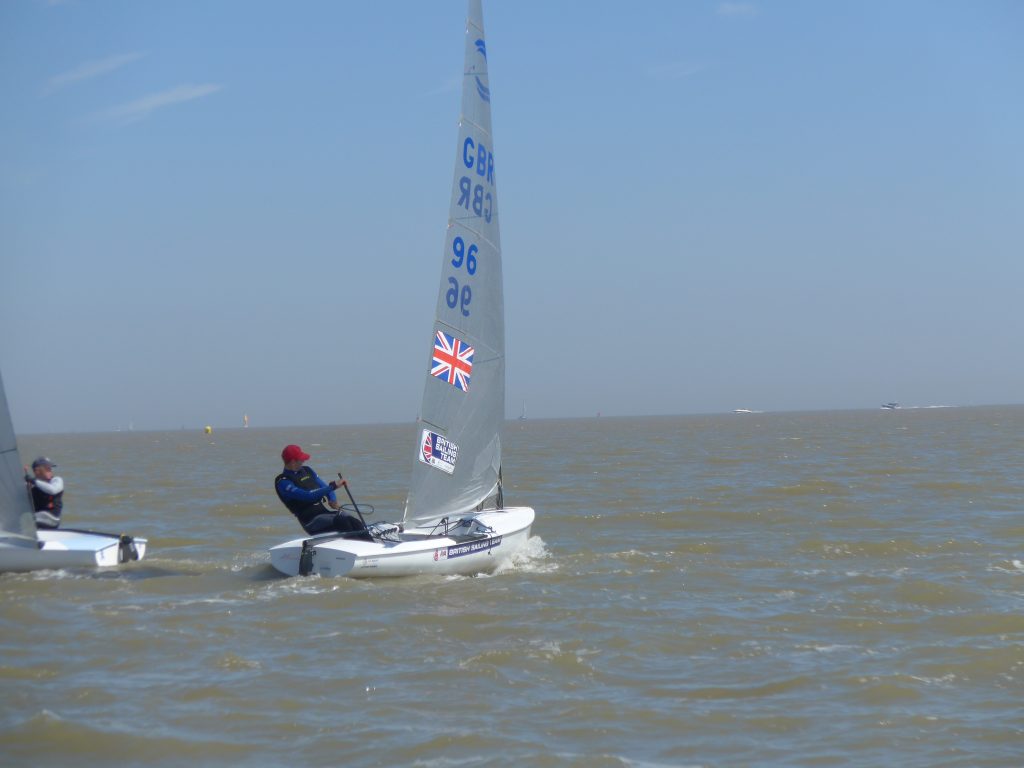 Overall the weather and hospitality of the club made it a great weekend and should make Harwich a regular stop on the BFA Travellers Series.