18 Finns ignored the foreboding forecasts of storm Callum to enjoy a gruelling but hugely satisfying weekend of first class Finn racing at the final BFA Traveller Series of the year.

Counting as an RYA National Ranker event, Warsash saw the shoot out for the GAC Pindar U23 squad, with the top two in the Traveller Series each receiving £500 grants towards the 2019 U23 World Championships. Many more sailors had planned to attend but ironically it was those that travelled furthest that came good, with entries from Oman, Scotland, Yorkshire and the Isle of Wight.

With the worst of the storm further west and clearing through the South Coast on Friday evening, Saturday morning soon brightened up and the breeze was alluringly light as the competitors sailed out of the Hamble for the Solent race area. However, the low soon made it’s presence felt with a gusty southerly building as the race committee laid out a windward leeward course.

The first race started in a gutsy 18-25 knots and lumpy sea. U23 heavy airs expert Callum Dixon (GBR 38) lead around the windward mark but British Sailing Team member Hector Simpson (GBR 96) was soon putting the pressure on downwind. The 6’4’’ Dixon’s recent time in the gym paid off as he managed to hold off Hector for the three laps of the 50 minute race to take the gun, followed by Cameron Tweedle (GBR 98) and James Skulczuk (GBR 81). 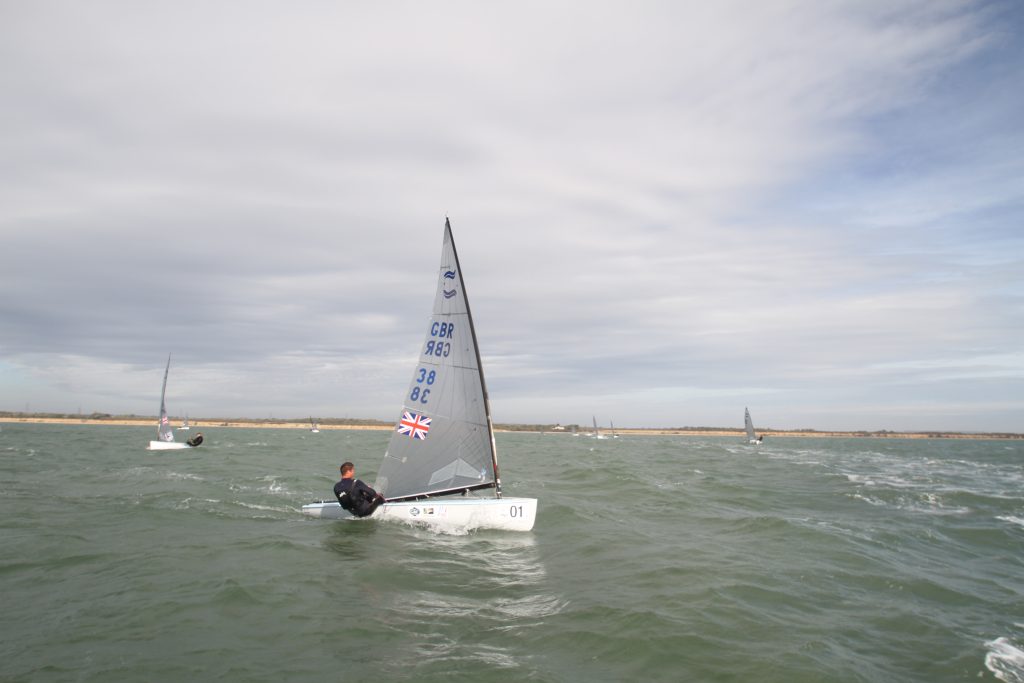 Race two saw the breeze down slightly to 17- 20 knots with bright sun and 19 degrees – a perfect showcase for performance Finn sailing. Again Dixon lead at the first upwind, but this time Simpson passed him downwind with some impressive drop pumping and surfing, whilst Skulczuk claimed third ahead of Tweedle in 4th – a pattern that was repeated for the third race. 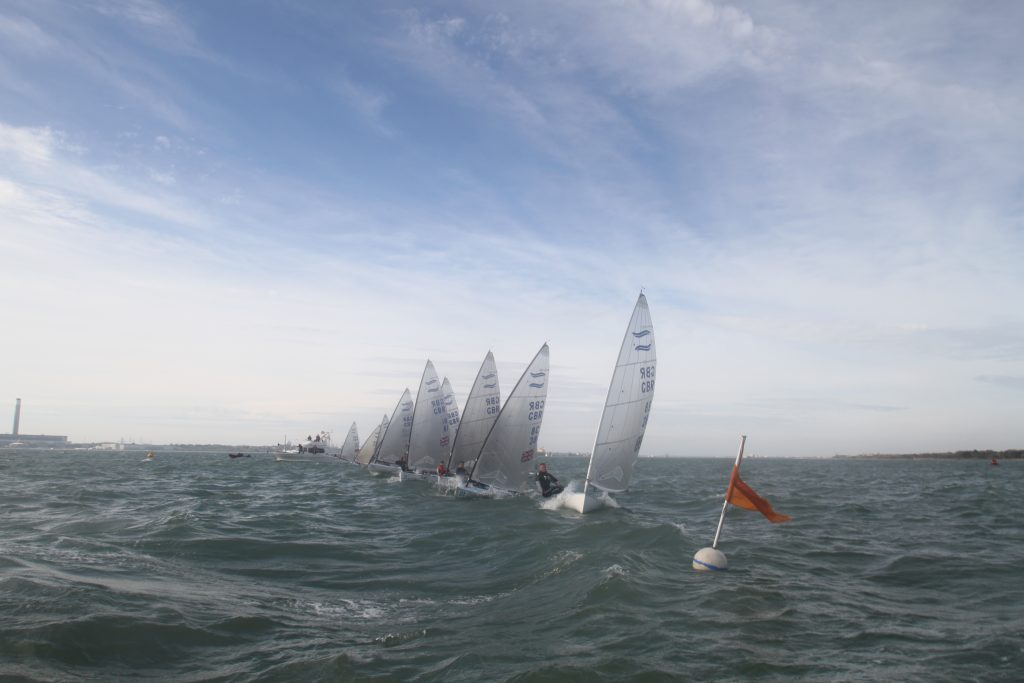 The testing conditions saw a few sailors take a brief swim, mainly at the bottom mark but all quickly recovered to fight back into contention. Most consistent of the non-full time sailors was James Downer, (GBR 49) with an impressive 7, 5, 7 to leave him 5th overnight, ahead of battling Warsash Club mates Ivan Burden, Keiron Holt and James Cole who were all within a point of each other. 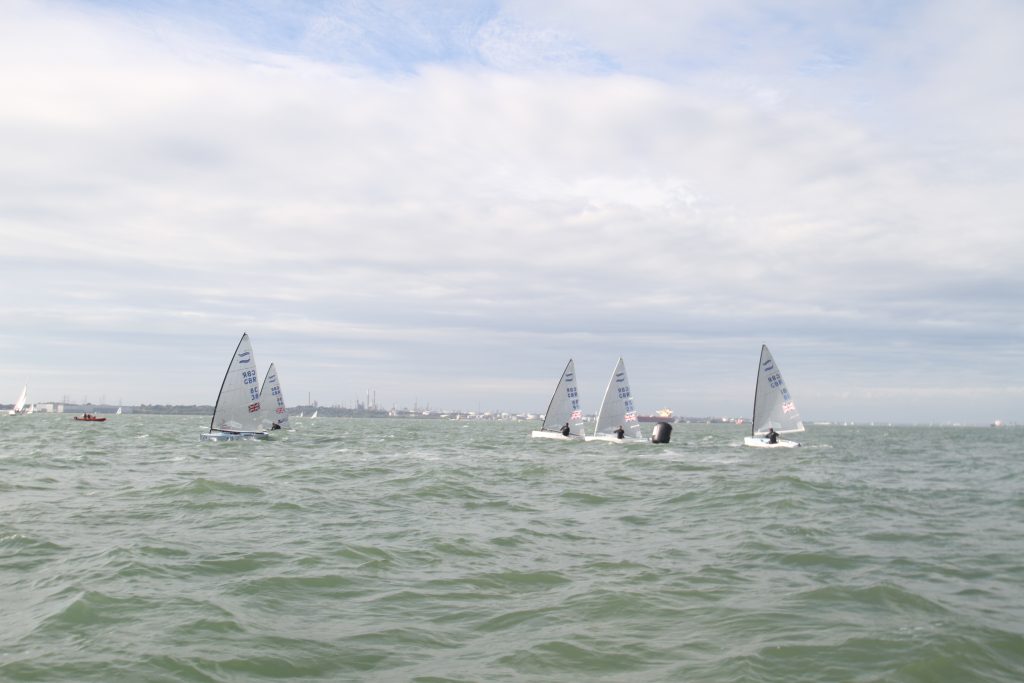 After welcome tea and cake ashore – kindly provided by the Warsash Co-Op store that also kindly provisioned the race teams, the battered and weary competitors were soon restored by an excellent meal provided by club caterers ‘Too Much Spinach’ and looked forward to a supposedly lighter wind forecast for Sunday.

Heavy rain greeted the sailors for an early start on Sunday, causing the Scottish contingent to remark that it was ‘just like home’! As the previous day, the sail out of the Hamble river lulled many into a false sense of security as the clearing rain left a light 8 knot breeze, but as soon as they reached the race area a gusty, 25 knot chilly northerly had kicked in. The efficent race team of Nigel Russell and Peter Knight soon had the racing underway, with a windward mark up under the Meon shore .

The shifty breeze and cross course tide made for more tactical options and let some of the canny older heads get ahead of the youth at the first mark, but by the end of the full 3 lap race normal service was resumed, with Hector Simpson leading Dixon, Skulczuk, Tweedle and Downer across the line.

Incidentally, Cameron had switched boats overnight due to a minor problem with his new Devoti Fantastica hull, back to his older Devoti Classic. His results over the two days were identical – indicating that the perceived difference in performance between the two Devoti models may be just that….

Thankfully the 25-knots dropped a little for the first downwind, allowing the Masters fleet to stay upright and even permit a bit of ‘Dad pumping’, but they were no match for the athleticism and technique of the U23 lads who pulled out some big distances in their tight chases downwind. 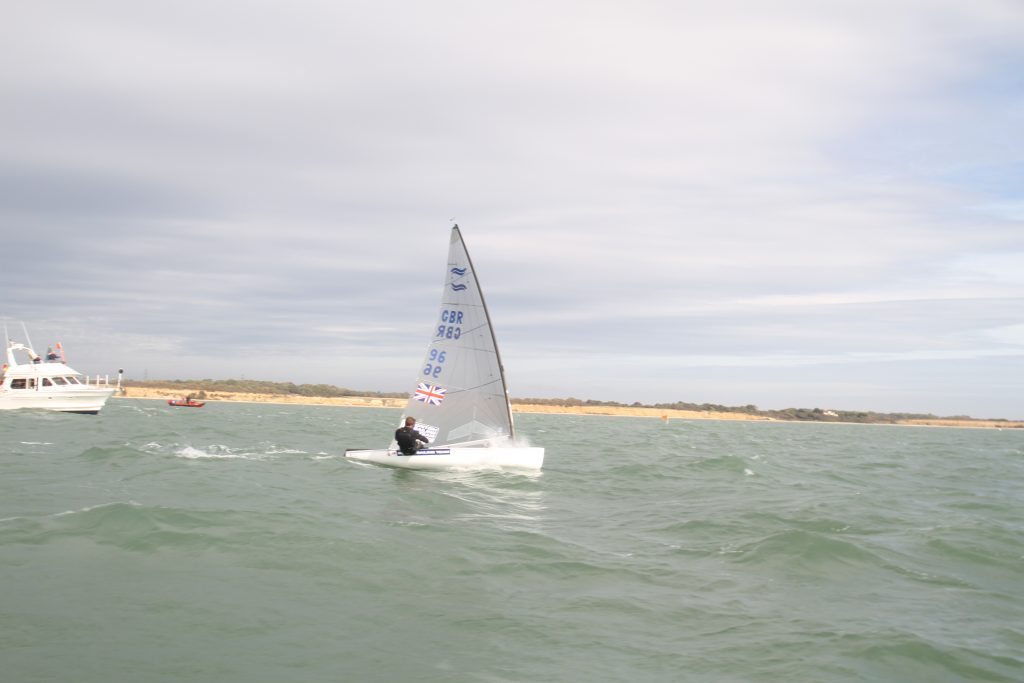 PRO Nigel Russell swiftly shifted the course each race to track the vagaries of the chilly northerly, ensuring true beats and dead runs that proved very tactical. Going either side of the run seemed to work best as gusts funnelled down from either side but taking the middle course rarely paid. Kieron Holt (GBR 33) made up some strong ground here in his flying Pata hull but he eventually lost out overall in a tight battle with Ivan Burden (GBR 750) who scored two 6ths in the final two races. 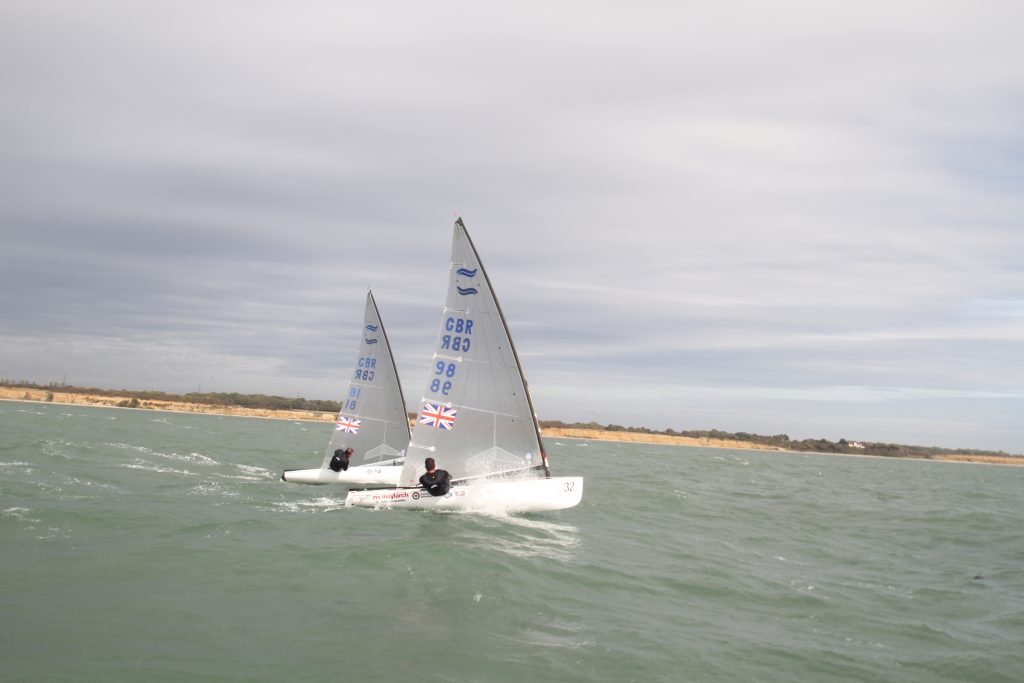 On the re-start after the first general recall of the weekend in race 6 as a sudden shift made the pin end over popular, Burden held on to the tidally advantaged left as all the hotshots tacked on a big shift right after the start. His moment of glory came as a shift back to the left saw him sail first around the windward mark, breaking the U23’s domination of the first beat…. but sadly didn’t last too long downwind!

A tired, challenged but satisfied fleet sailed back to Warsash to be refuelled again by a welcome Co-Op tea and warm showers. At the prize giving Hector Simpson was awarded first place, with Callum Dixon a worthy second on the podium, just 4 point behind and 7 points ahead of James Skulczuk in third. 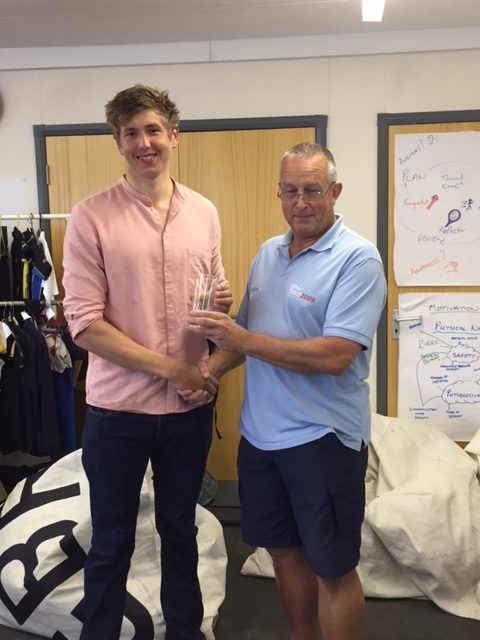 The overall season’s Travellers Series silver trophy was awarded to Cameron Tweedle, although Hector Simpson had closed the gap to a single points and James Skulczuk only a further point behind Simpson – the closest finish for years and testament to the close competition between the latest generation of Finn sailors. 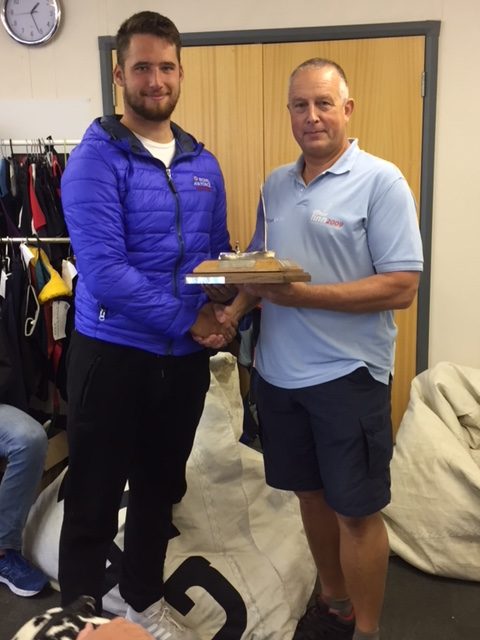 Cameron was rewarded for his commitment to the series, travelling to every one of the 7 BFA events despite a hectic international schedule and by virtue of an excellent second place at the non-discardable GAC Pindar National Championships.

Thanks were given to the excellent race team of volunteers plus Class Secretary Martin ‘The Million Dollar man’ Hughes for organising the event and for not being diverted by off putting forecasts! Next year’s event schedule will shortly be confirmed and available on the BFA Website calendar.