Warsash Sailing Club hosted the third, but sadly final BFA event of a curtailed 2020 season, over a glorious Finn weekend on October 10-11. Twenty-eight Finns entered for the season’s famous finale. Unfortunately, the COVID-19 restrictions placed on the sailors from Scotland prevented them from attending.

The forecast in the week leading up to the event was wet and windy but by Saturday morning it was due to provide perfect Finn conditions with 12-18 knots from the northwest. Following, a suitably distanced briefing sailors left the slipways in Warsash to run down to the race area off Solent Breezes. Within a few minutes of the last boat arriving Race Officer Nigel Russell got racing underway with the first of six clean, first time starts of the weekend. Gusty conditions at the top of the wind range provided a challenge for some upwind and for many more downwind. Weeks and month of not sailing, or at least pumping one to one in gusty conditions left many struggling to get the maximum out of their boats downwind. John Greenwood showed his intent early by leading round the course with Allen Burrell and Lawrence Crispin in close pursuit. The gusty conditions with large shifts impacted on each race with some sailors making what looked like a great gain to then find they had been sabotaged by boats on the other tack on a completely different windshift. 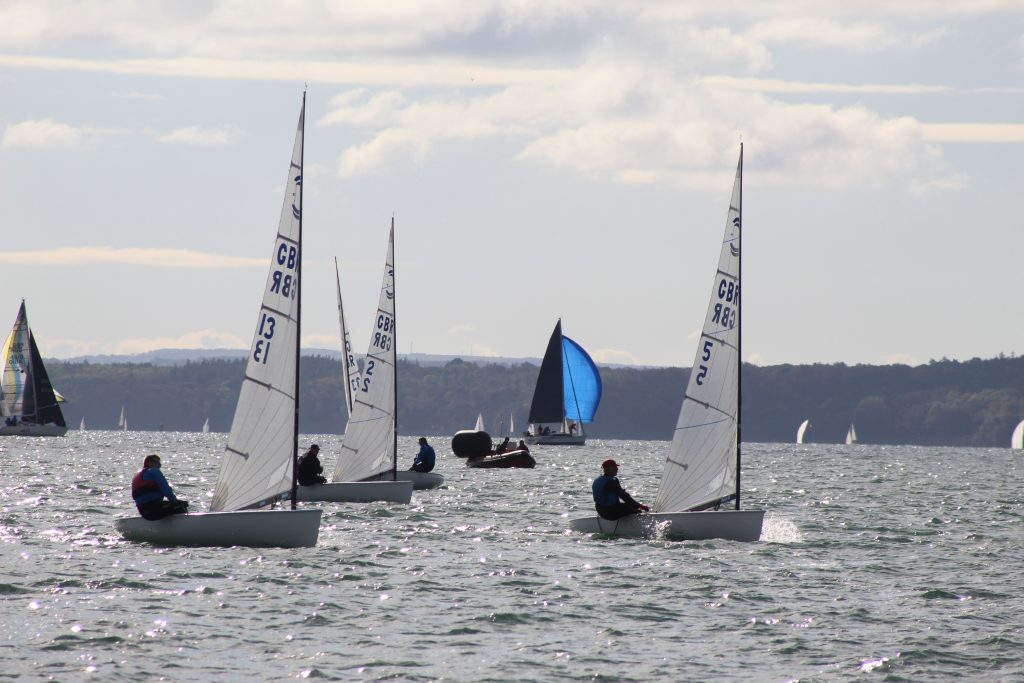 Race 2 again saw Greenwood take line honours but he had to work hard to pass Kristian Sjoberg who led for much of the race. Race 3 saw the youngster of the fleet emerge on top. James Downer led for most of the race picking some good shifts up the first beat and opening up a good lead as the race progressed. Greenwood maintained pressure on the top of the fleet in second place and Allen Burrell squeezing out Crispin for third. Race 4 was another gusty affair with many sailors really feeling fatigued, but clear thinking by Warsash sailor Kieron Holt saw him round the windward mark in first only to be overhauled as the race progressed by Crispin and Downer to finish in third. Several capsizes during their race reduced the numbers racing as wet and completely knackers sailors felt the full impact of the four bruising races. 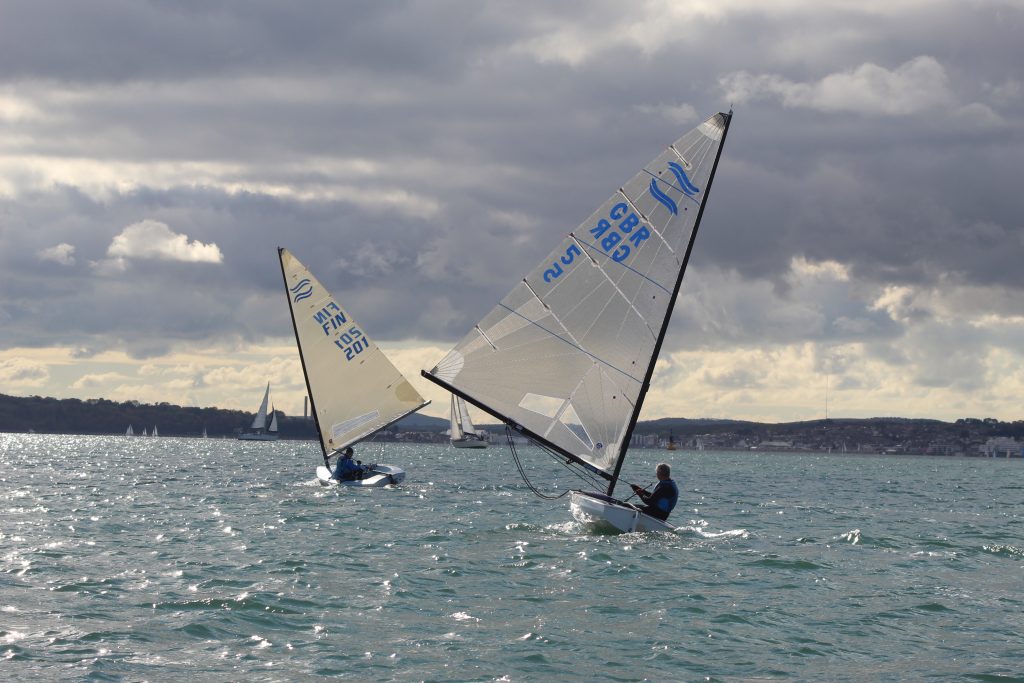 A long sail back to Warsash finished the day, but as the wind reduced in strength and the sun began to shine it was a hard but pleasant sail. Thoughts for many turned to food and despite the strict Covid arrangements many sailors enjoyed the delights of lasagne or curry followed by apple and blackberry crumble washed down by a few beers or a bottle or two, (in Laurence Crispin’s a case of red wine!).

Sunday morning saw a dramatic reduction in wind strength, which was just as well for the many weary bodies across the fleet. So weary in some cases that despite the early briefing and lots of encouragement to get going that several sailors failed, by a considerable margin to make the 10:30 start. Maybe it was the wine or maybe it was the over enthusiastic Martin Hughes who dragged Lawrence Crispin and John Heyes over early to score an OCS. Hughes (somewhat advanced of the rest of the fleet! Ed ) recognising the error stopped and went back to start correctly whilst the others carried on. Sod’s law it would be Heyes’s best result, just holding off John Greenwood on the line for a third!

Kristian Sjoberg again showed his metal and took line honours from Roman Khodykin who led for much of the race, he had a good lead at the first mark, (behind the OCS Crispin) and even had time to hit it and do turns before continuing to lead the race. However, Sjoberg’s superior speed off-wind pushed him back to second and John Greenwood third. Race six again saw Khodykin at the front in the early stages but again he was overhauled by Sjoberg and Greenwood putting him back to third. James Downer had continued to be in contention for the top places and in the final race held out to take line honours closely followed by Lawrence Crispin and Greenwood. 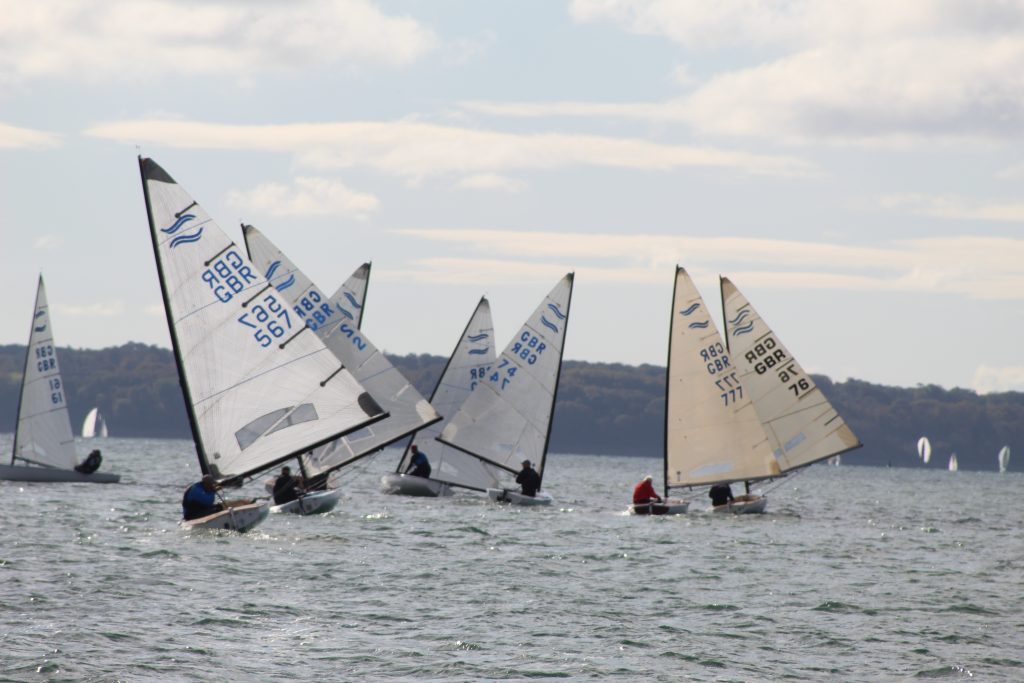 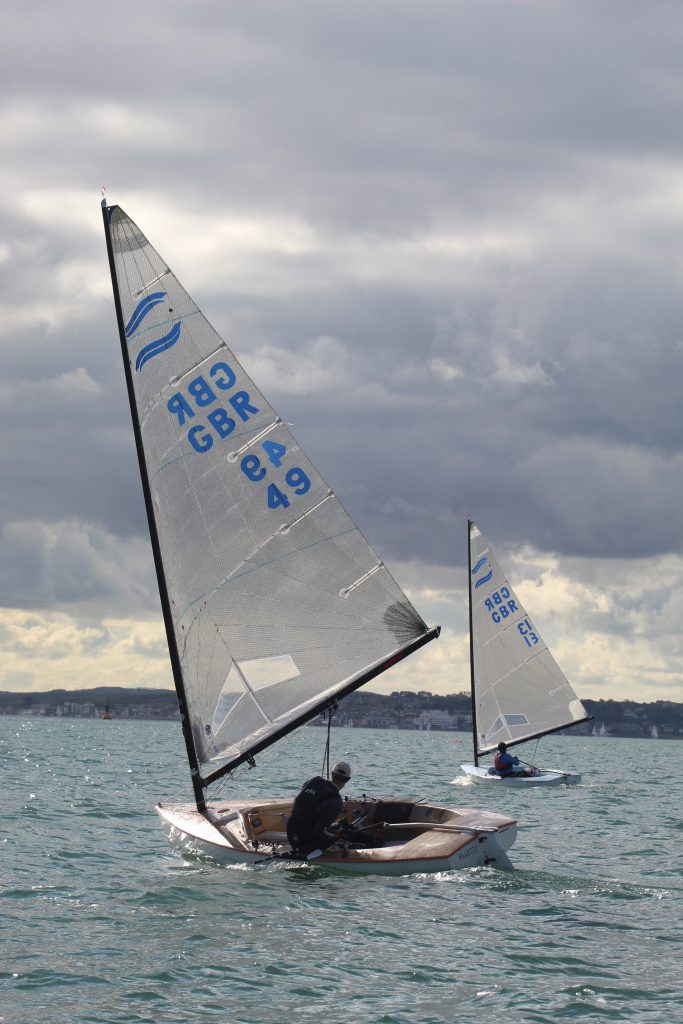 In the final standings John Greenwood won the event followed by Lawrence Crispin and James Downer. At the socially distanced prize giving it was unanimously agreed that the sailors had experienced a hard but excellent weekends sailing and were already looking forward to returning next year. 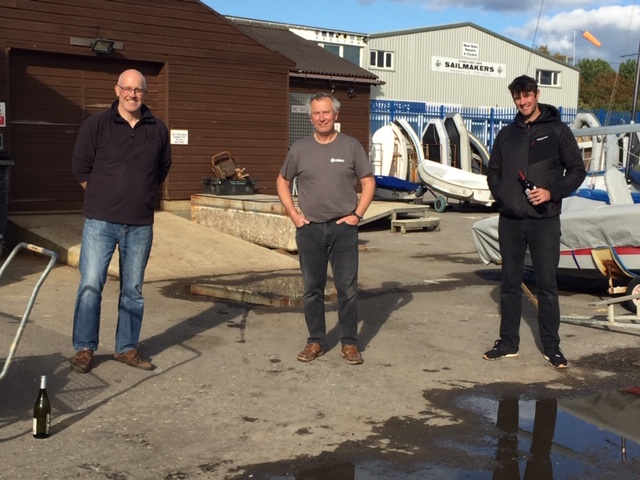 The BFA would like to thank Warsash Sailing Club for going ahead and holding the event despite the difficult COVID-19 situation. Special thanks go to PRO Nigel Russell and his highly efficient team on the race committee boat and to those members who volunteered their time to lay marks and generally be sent around the Solent in a RIB.

Photos (all from Sunday’s racing) by Nigel Rennie