The British Finn Championships attracted a strong entry of 43 boats, across every age range from U 23 to Super Legend, proving the universal appeal of this iconic boat. A typical Torbay shifty south easterly greeted competitors on the Friday, with the course area nearer to the Paignton shoreline than ideal due to the presence of the Queen Victoria cruise liner parked in the middle of the bay. 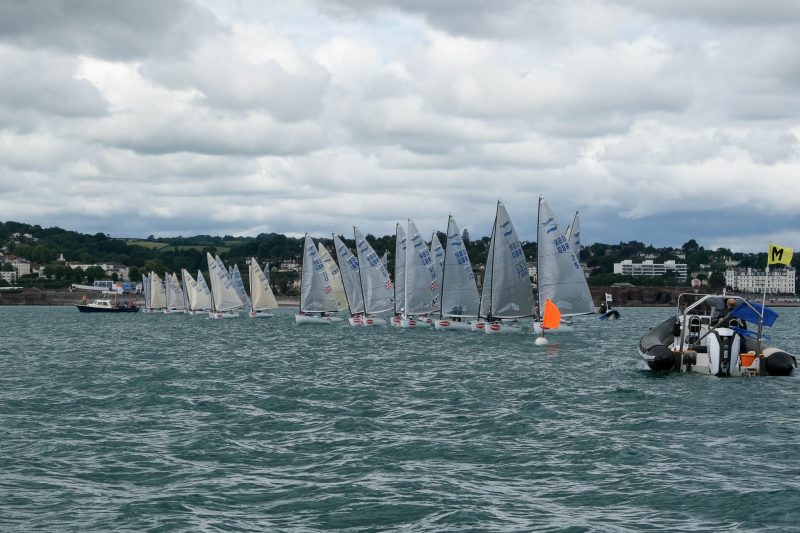 Race one finally got off under a black flag after a general recall and saw the starboard end boats tack early and head for the shore, The 7-8 knots breeze become more shifty towards the top mark, as John Greenwood (West Kirby SC) took the lead from Burrell and Julian Smith, (Mengeham Rythe SC), only for Allen Burrell (Thorpe Bay YC) to take the lead on the second lap to claim the win. 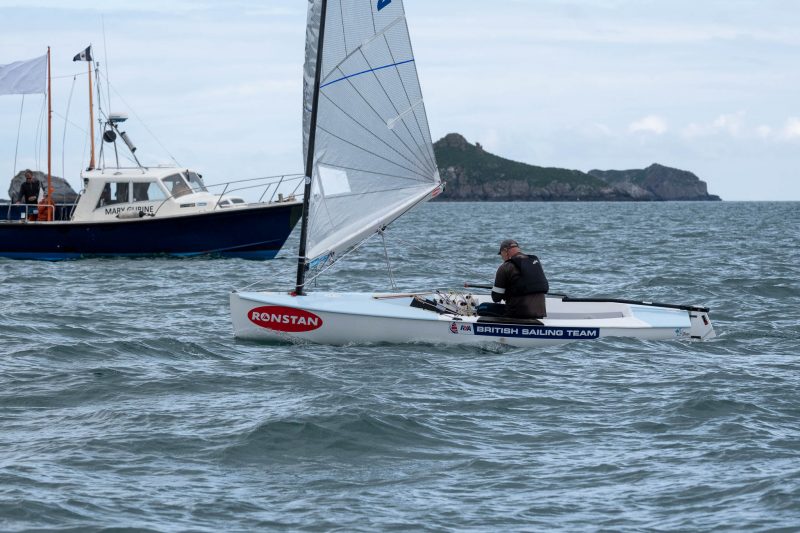 Race two was started after a short delay whilst the wind steadied down to a more consistent direction. Simon Percival (Christchurch SC) showed good speed on the upwind legs in his borrowed Petticrows hull to take the lead and arrived at the final leeward mark so soon that he took the race officer by surprise! As Simon rounded the leeward mark for the second time, it should have been a short reach to the finish line. Not spotting a finish flag flying from the Committee boat, Percival was unsure if the number of laps had been increased from the previous race and so headed back upwind. Second placed Fergus Allen (Loch Earn SC) hailed him and carried on to claim the win, but Percival successful protested the race committee for failing to fly the finish flag in time and was later awarded joint first with flying Fergus, ahead of Jim Downer (Gurnard SC). 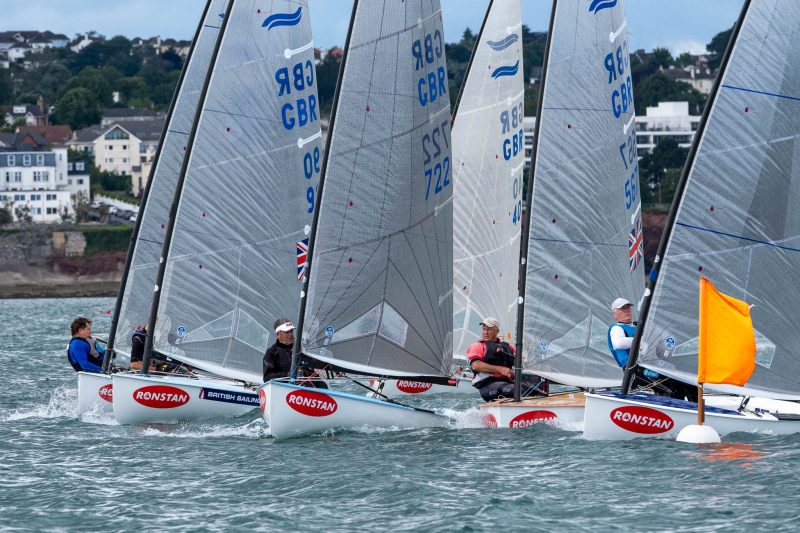 The breeze had built to a gusty 12-14 knots for the start of race 3, with the Oscar flag hoisted to allow free pumping. The starboard end of the line looked favourite before the start, but with two minutes to go a big port end shift tempted a few of the top sailors to the pin end, only for it to head back to the right on the gun, leaving some stranded out to sea and those on the inside of the right hander got lifted nicely into the mark. Allen Burrell had a good tussle with fellow Thorpe Bay team mate Lawrence Crispin throughout the race, with Crispin taking the gun from Burrell and the consistent Fergus Allen. Overnight, even the usually consistent sailors all carried one score they would rather discard, underlying the tricky conditions, with Allen Burrell leading the scoreboard, with a 1, 10, 2 score.

The forecast for day two as not promising, with 5-6 knots ESE promised for the morning. Somehow Race Officer Mike Currie managed to run 3 races in the very light conditions which were something of a lottery for many.

Race four started with a port end bias that tempted some sailors into the Torquay cliffs, where convergence increased the fickle pressure and they looked to be well ahead of those crawling up the middle of the bay. But when striking out on port for the mark, the wind faltered, probably due to the bulky presence of the redundant cruise liner upwind. On the downwind leg of the windward leeward course, a large group of kayaks could be seen off the Torquay cliffs, which proceeded to cross the course, each accompanying a swimmer! Luckily the light winds avoided any collisions, but the race officer had little choice but to belatedly end the 2 lap course at the bottom gate, much to the delight of Dan Belton, (MRSC) who was leading the pack to the left hand buoy, and the short reach to the offset finish line. 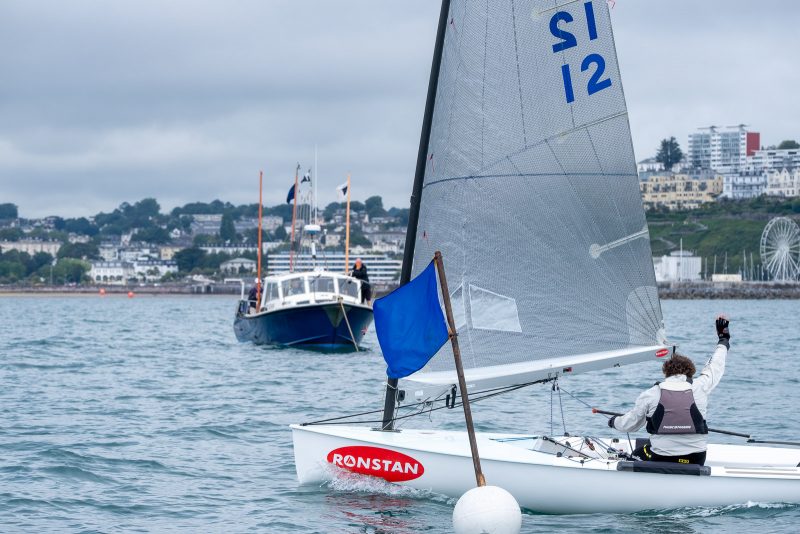 The course was moved further north in the bay to avoid the return of the club swim, and two further shortened races were held, with light airs expert Fred Van Arkel (MRSC) taking the second and Julian Smith (MRSC) the final race of the day, making a it a clean sweep for the Chichester Harbour based Mengeham fleet.

Race 5 saw another notable Mengeham member Super Legend Richard Hart have his best result of the regatta, a 10th. Sailing in the same waters as he did in the Finn Gold Cup in 1964, Richard completed every race. In the final black flag start on Sunday I watched him in dismay eating a snack on the line with 20 seconds to go, then 10 seconds later calmly sheet in and go, well ahead of the rest of the fleet. I need not have worried – the most experienced sailor in the fleet was the only one with the confidence and ability to sit just below the line watching his transit and judge his start to perfection. 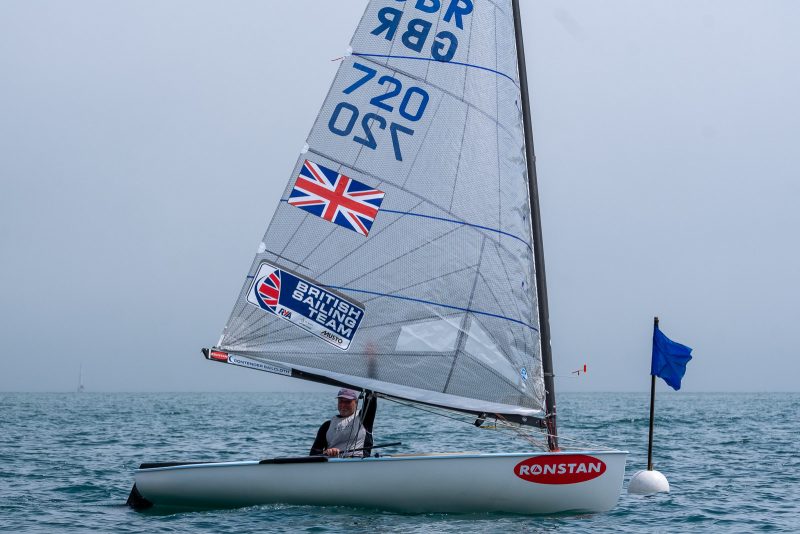 Paignton SC’s U 23 Ben Flower borrowing a boat for his first ever Finn regatta, showed his local knowledge with a hugely impressive 2, 2, 3 score for the day’s supposedly ‘lottery’ conditions. Julian Smith took over as the overnight leader, looking to reclaim the National Championship title he previously won in 2014.

Saturday evening saw a strong attendance at the British Finn AGM, where members discussed some great ideas for growing the class both in the UK and internationally in the light of the loss of Olympic status. New member Don Francis explained why he chose  the Finn when returning to sailing after a break. After looking at many single handed options he found the Finn offered the best value for a competitive boat plus the added value of a great UK & international Masters circuit. It was great to see more than 7 new faces in the Nationals fleet, testament to the growing popularity of the Finn in UK club racing. 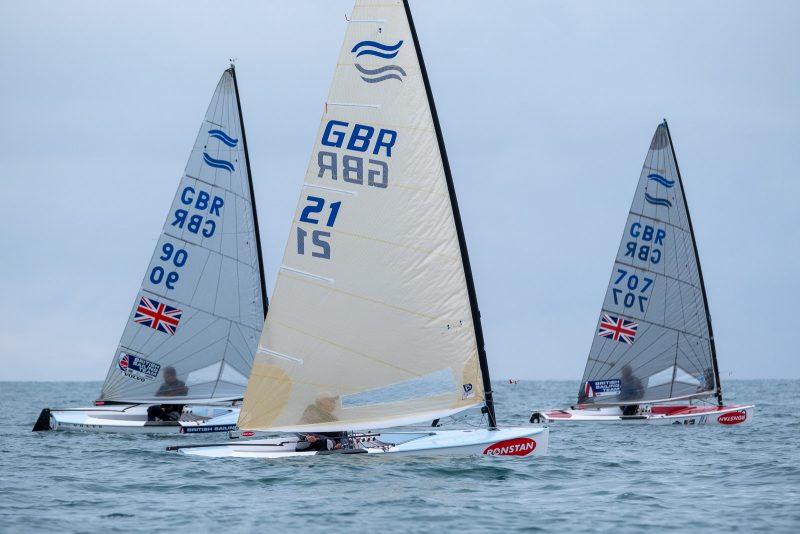 Sunday’s forecast of 12-14 knots for the final two races of the championship did not disappoint with the leaders positively drooling at the prospect of a final showdown with a decent breeze! Mast positions were moved and sails changed as the fleet head out in the lumpy sea to the south side of the bay, where a race track was laid between the two anchored cruise liners. 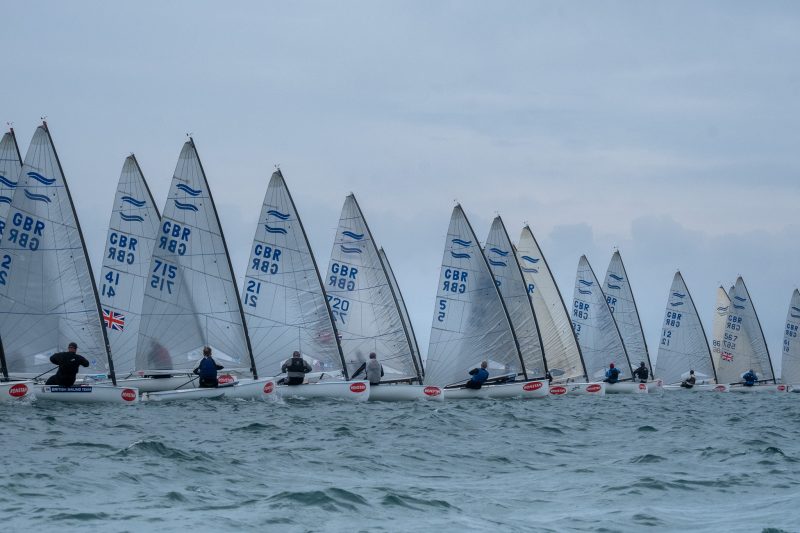 The start of race 7 was aborted in the final second as a shift took the bulk of the excitable fleet over early, despite the black flag. The second start got away cleanly, with the more established names slugging it out upwind in the choppy sea and frequent shifts. Free pumping saw the Finn show off it’s full potential as the more athletic sailors were able to surf their boats downwind and gain valuable places. John Greenwood recovered well from a mid fleet start to challenge the leaders, Allen Burrell and Simon Percival who took the first and second spots. 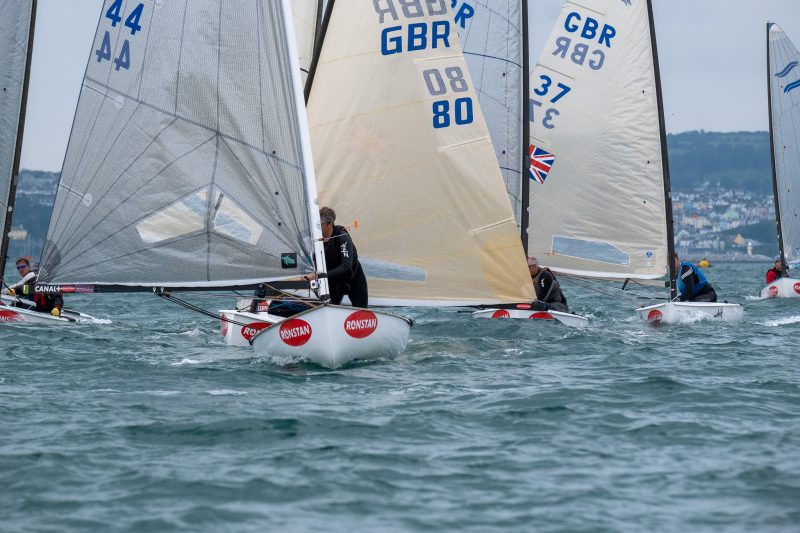 The tide had turned for the final race, allowing the sea to smooth out and provide the lighter crews an easier ride upwind. Ex Laser World Champion and Finn Olympic campaigner Lawrence Crispin started further down the line from the bulk of the fleet who were keen to play the right of the course, and was rewarded with a favourable 10º port tack shift and then more pressure as he approached the top mark, rounding just ahead of Steve Hayles (Christchurch SC) who had taken the right hand route. Open (U 40) entrant Jim Downer (Gurnard SC) used all his pumping and surfing skills to break through the Masters downwind, but could not catch the experienced Crispin, who took his second win. 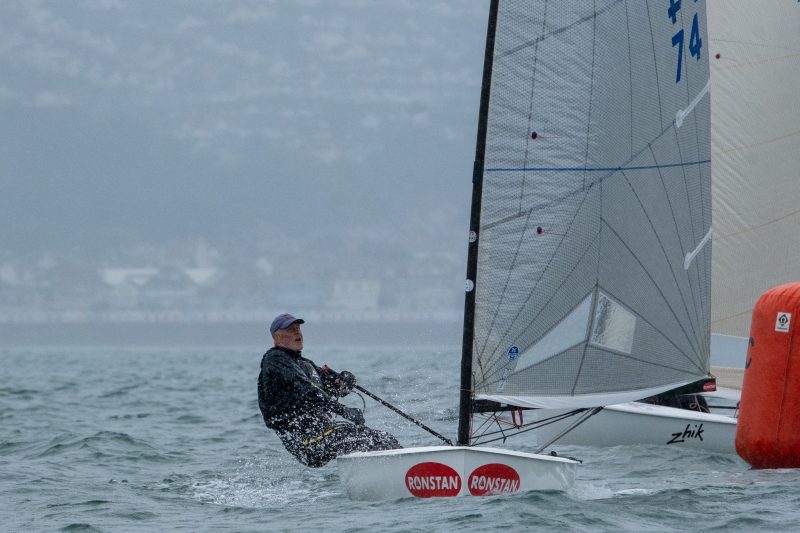 As the rain came down and the fleet returned satisfied from the testing race course, the overall winner was confirmed as long time Finnster and previous Olympic campaigner John Greenwood, ahead of Lawrence Crispin and Simon Percival – interestingly making it a 1,2,3 for the British built Petticrows Finn. Despite his many years of Finn sailing and Nationals attendance, this was Greenwood’s first Finn National title and you could see it meant a lot to finally hold the coveted Sunday Times Gold Cup and join the illustrious list of names already inscribed on the trophy. 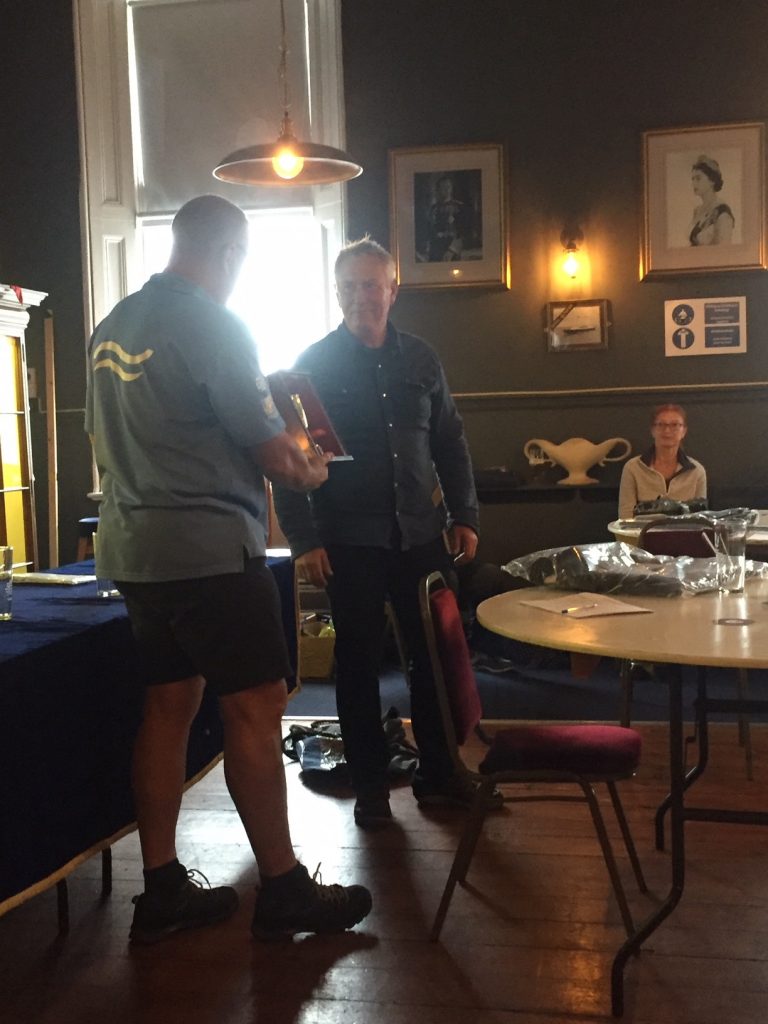 Many thanks to Bob Penfold of the Royal Torbay for his great work in organising the event, plus the brilliant shore team and PRO Mike Currie and his team for a testing but hugely enjoyable event.

The 2021 British Finn National Championships were supported by Ronstan, The Old Salt loft and North Sails. 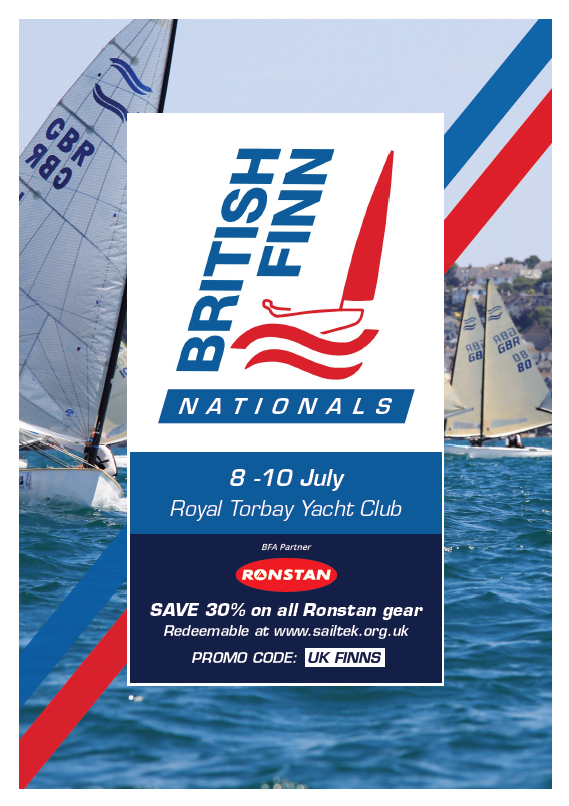