A healthy entry of 36 boats from over 13 UK clubs travelled to Hayling Island for the 2021 Masters Championship and open, including several new recruits to the growing British Finn fleet. Expat David Kitchen even flew in from South Africa and spent 2 weeks in a quarantine hotel to be there – now there’s keenness for you!

Flags on the Mengeham Rythe flagstaff were flown at half mast in honour of long-time Finn member Anthony Walker, who passed away suddenly two weeks previously. He would have been racing that day and was sadly missed by all – son Matt was racing in his memory as Anthony would have loved to see.

Saturdays forecast of a south-easterly breeze of 7 knots out in Hayling Bay, proved accurate but the lack of bright sun precluded the development of an additional sea breeze. PRO Robert Macdonald was swift to set the windward/leeward course and get the starting sequence going under the one minute ‘U’ flag rule. 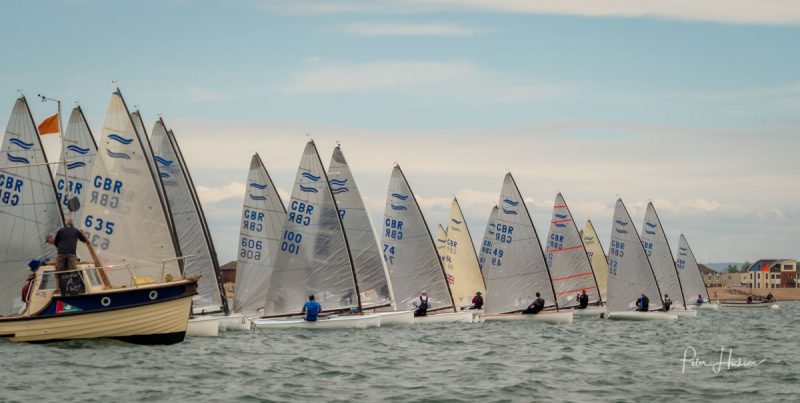 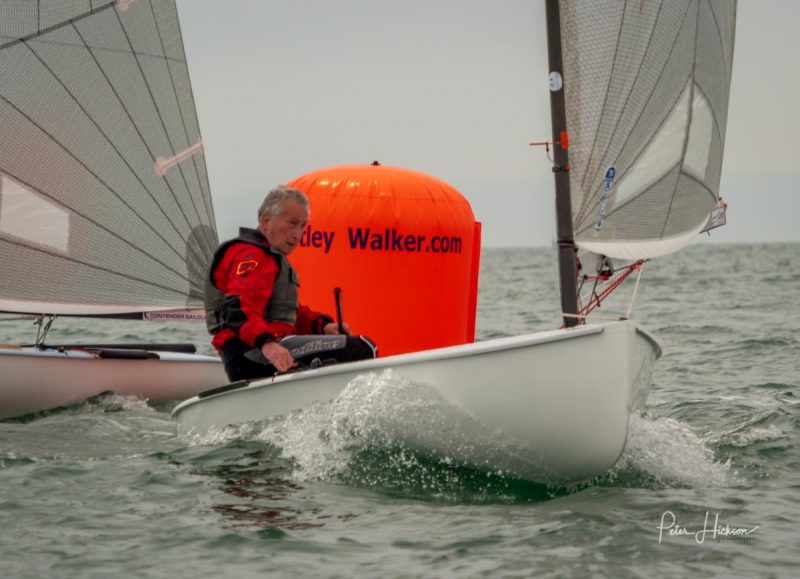 Masters Legend and Devoti Finn dealer Rodney Cobb (MRSC & Bosham SC) showed confidence in his start line transit, setting up a length above the rest of the fleet to gain a great start in clear air, and lead the pack on the right of the course to the windward mark. However, taking the lee bow of the flood tide on starboard proved the slightly quicker route and so Open entry Jim Downer, (Gurnard SC) rounded first, with Kristian Sjoberg, (Thorpe Bay SC) close behind in the shifty, tricky conditions.

The downwind legs proved a tactical challenge, with small gusts and shifts offering passing opportunities to those with a keen eye out behind. Light airs expert Cobb hung on well to his position in the short lived shift in the second upwind to claim a deserved 6th behind the eventual winner Jim Downer, with John Greenwood, (West Kirby SC) coming through to second ahead of Kristian. 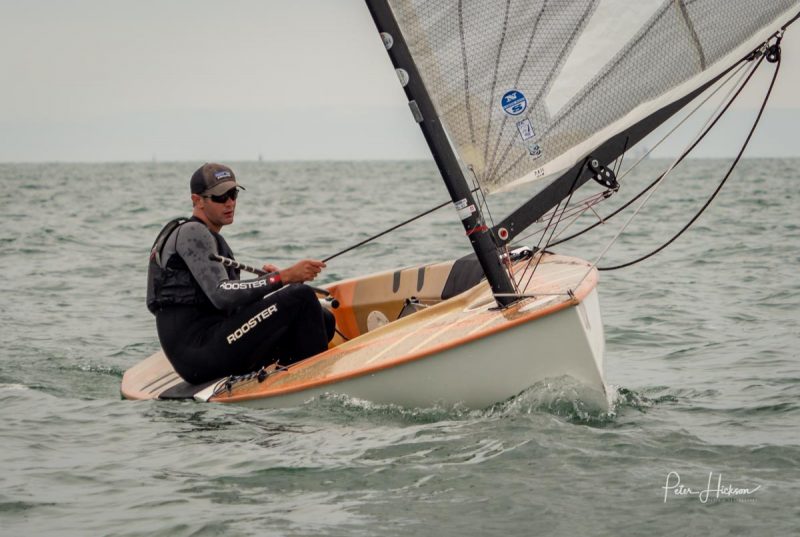 Race two offered more of the same, with the wind flicking left to encouraging more to take that side of the beat although the numerous short shifts meant sudden and unexpected place changes, which brought several new faces to the front. With the windward mark in a building foul tide, judging the layline was challenging for many and saw hard won positions lost in an instant as boat were forced to tack again on the mark. 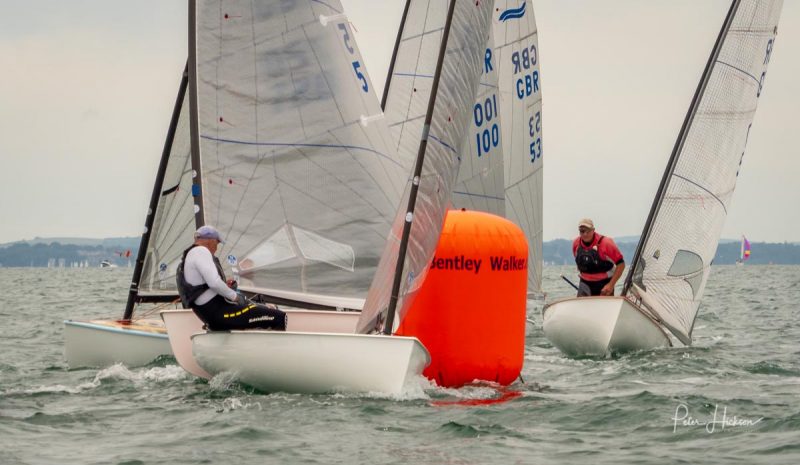 Tight action at the windward mark.

Jim Downer again showed the Master’s fleet the way home, this time with Simon Percival (Christchurch SC) close on his heels, and Lawrence Crispin (Stone SC) claiming third, ahead of Kieron Holt (Warsash SC) who showed remarkable consistency in the tricky condition to take his second 4th of the day.

With the light south-westerly beginning to falter, the final race of the day was quickly started, with both Downer and Sjoberg caught out by the one-minute rule. The breeze was now very patchy over the reduced upwind leg, with competitors sitting on the centreline to coax more speed against the tide. Experience and technique looked to pay, as despite frequent places changes in the patchy breeze it was Great Grand Master John Greenwood who crept over the line first, ahead of two Legends, Rodney Cobb and Richard Hart (MRSC). Ever the gentleman, Richard commented, ‘I was up and down in the race, but just lucky to be in third when it was stopped.’ 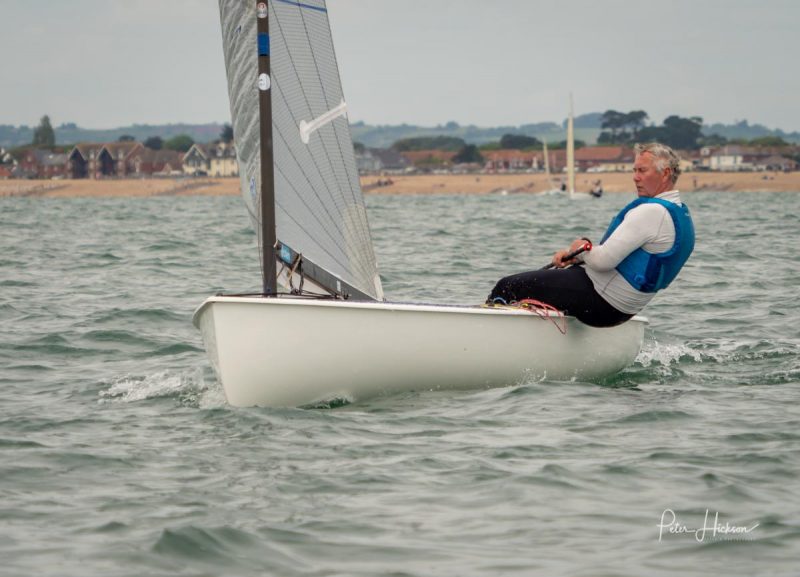 The hard working team of helpers at Mengeham Rythe put on a much appreciated tea once all the sailors had struggled back up the harbour against the ebbing tide, the back markers having to contend with a lack of water in the creek. With most sailors having at least one high score, Kristian Sjoberg remarked that it had been a day with ’Something for everyone’.

Sunday morning saw the typical Finn boat park community in full swing, with tuning advice freely handed out to new comers and mast positions adjusted for the gusty 16-20 knot easterly breeze.  Open entrant Olly Murray from Yorkshire Dales SC, is a recent convert to the Finn, previously racing in the Blaze and Phantom fleets. ‘The Finn is so much nicer to sail’, he said, ‘It’s a relief not to have to spend all your time on your knees in the boat. It’s great being here, I’m learning all the time”. The Yorkshire Dales club is currently enjoying strong Finn growth, lead by Finn enthusiast Dave Walker who is bringing a strong Yorkshire contingent to the Nationals next month. The less inviting forecast put a couple of legends off venturing out into the Hayling Bay, but once out over the bumpy bar, the seas flatten off and wind dropped to a more comfortable 12-15 knots.

Race 4 was started with the free pumping flag flying, allowing the more athletic sailors to show off their version of drop pumping downwind. Beating against the tide, John Greenwood took the left hand side off the pin end, seeking the anticipated extra pressure along the shore, but those out to sea didn’t seem to lose out any. Several places were won and lost on the first run, with different gusts on either side. The second lap involved two processional reaching legs, which saw little place changes. At the finish it was the more regular front end faces – John Greenwood taking the gun from Lawrence Crispin followed by a return to form for Allen Burrell, shading out Kristian. ‘Youngster’ Jim Downer surprisingly took a 17th, underlying how tricky the conditions remained, with plenty of ‘snakes’ available as well as ‘ladders’. 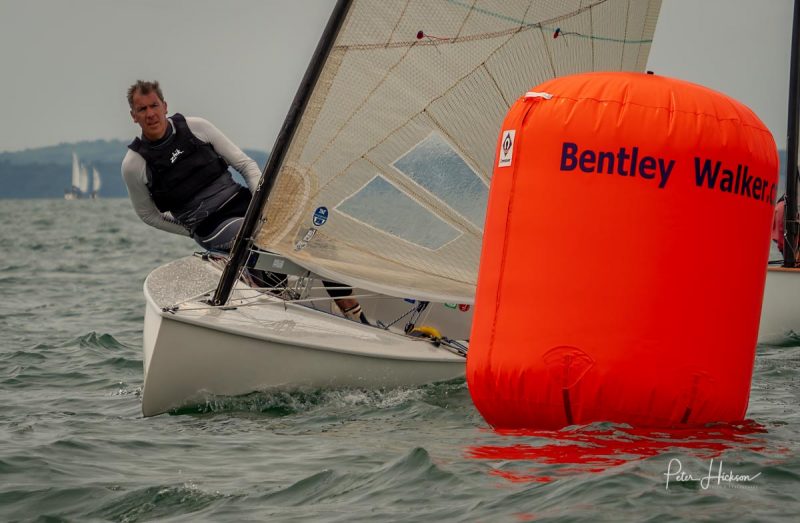 With the wind gradually reducing through the cloudy afternoon, race 5 was swiftly begun as the wind flicked left, attracting many of the fleet to the pin end of the line and towards the left side of the revised, windward/leeward course. On the second upwind, Martin Hughes (Warsash SC) struck out boldly into the full tide out to sea, and was rewarded with a reported 15° shift, that took him form around sixth to first around the windward mark, a position he held from Al Burrell who didn’t go quite as far right, followed by the consistent Finn Kristian Sjoberg, who held out Greenwood downwind.

The final race saw heavy rain showers that suppressed the breeze further at times and created frustrating holes around the finish line. Jim Downer finally proved that athleticism downwind wins over aging Masters, taking the gun from Great Grand Master Hughes, who had obviously got a taste for the view from the front of the fleet! Third and fourth places were a repeat of Race 5, with Crispin taking 5th ahead of Dan Belton (MRSC) who had his best score of the weekend.

Ashore in the dry, the warm hosts Mengeham Rythe again provided a very welcome hearty tea and generous alcoholic prizes for the winners.  John Greenwood thanked the PRO Robert Macdonald and Commodore Joanna Lewis plus all the helpers for a great weekend’s championship racing. 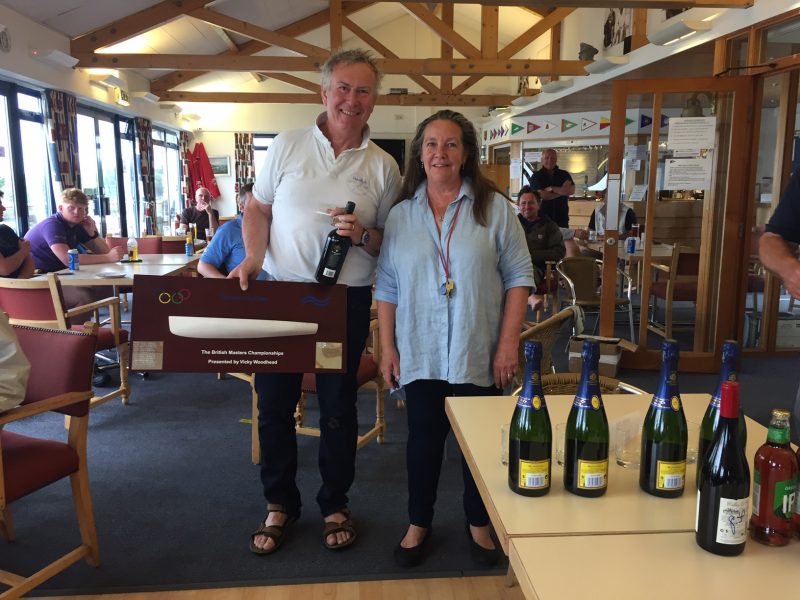 Next stop on the BFA calendar is the UK National Championships at the Royal Torbay YC, entry is still open via your web collect account, so come and join the fun!