Over the 19-20th September the experienced team at Christchurch Sailing Club organised a Covid secure and socially distanced UK Masters championship and Open event, much to the delight of the of 30 Finns that attended. As the first major event of the year after a seriously depleted racing calendar, the competitors were all keen to get back to some big fleet championship racing on the iconic Christchurch Bay race track. After a socially distanced briefing on the dock, the fleet sailed out through the harbour in an unseasonal North Easterly 16-24 Kts, which proved extremely shifty and impossible to predict. This wind direction involved tacking out through the roaring Run at Mudeford – not for the faint hearted, but all arrived safely on the race course.

The race team led by PRO Paul Butler despatched 3 well laid windward/leeward courses on the building ebb tide. In the first race, with the west going tide and the gusty NE forecast to move to the East everything on paper pointed to a right hand track up the beat. However, at the start a sharp flick to the left favoured those at the pin end who headed straight inshore with possibly a better angle on the curling tide. John Greenwood (GBR 5) lead the way followed by the current Masters champion Lawrence Crispin (GBR 74). Crispin’s training partner Allen Burrell was trailing in 8th place, but an inspired second beat saw him pull up to third at the finish, ahead of Richard Sharp (GBR 90). 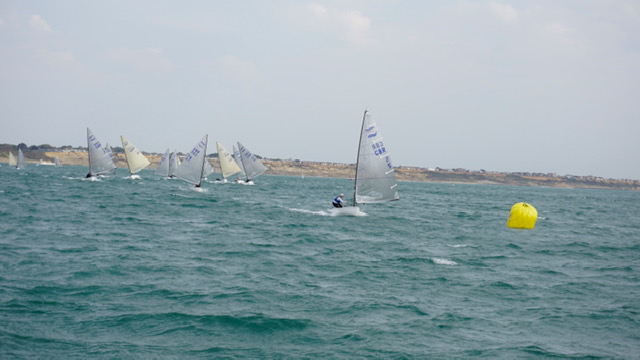 The second race again saw the leaders come from the left, but the strong and gusty breeze was different across the course, with a lumpy set of waves to negotiate. Burrell went hard left again to lead at the first mark, ahead of Greenwood in second. The conditions seemed ideal for the Fantastica hull shapes, with Burrell and also Matt Walker (GBR 100) in a similar model showing good speed in third, ahead of local ace Simon Percival (GBR 635) and ex Finnish Olympic campaigner Kristian Sjoberg (FIN 201). 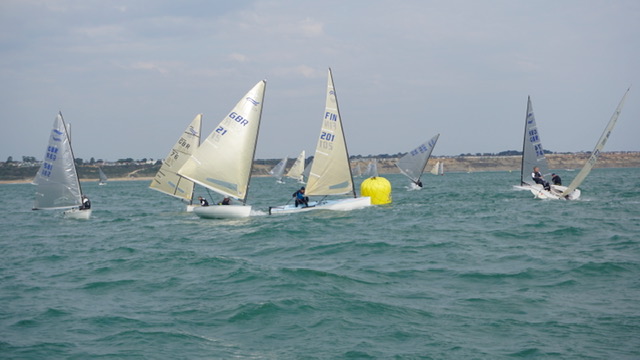 The final race of the day had a more even split up the beat, as the short sharp shifts made it even trickier, with sudden dramatic shifts causing some involuntary tacks. This time it was turn of an ex UK Olympic Finn campaigner and Laser World Champion to take the win, Lawrence Crispin proving the a Fantastica hull was not a prerequisite, as he piped his Thorpe Bay tuning buddy in his Petticrows boat, who in turn was ahead of a new, svelte-like John Greenwood also in a Petticrows hull – another ex Olympic campaigner. 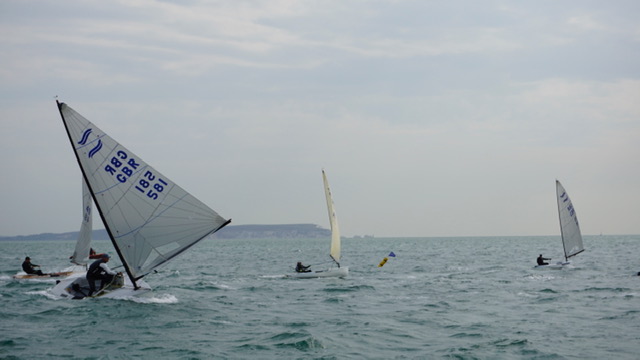 Downwind with the tide under you– the ride was spectacular but short lived for the lighter weights looking to gain places. Despite the breeze gradually dropping through the afternoon, a sustained dramatic gust came through on the final run, catching a few unawares and made the trip back through the flooding Run like a high speed flush through U bend – with a gybe in the middle for added excitement! Sadly, the experience proved too much for Peter Vinton’s classic Fairey Finn, which broke its carbon mast. Undeterred – Peter resumed play the following day with a proper classic rig of aluminium mast and Dacron sail – proper Finn sailors kit!

Overnight, Burrell and Greenwood were tied exactly on 6 points apiece, out on front of defending champion Crispin and Finnish flyer Sjoberg in third. Sunday was forecast to still be North Easterly, but a much sunnier and lighter wind version of the previous day. However, as the fleet gathered at the picturesque club it felt much the same as Saturday, with a temperature of just 15 degrees with a whistling wind and ominous grey clouds. Sailing down the harbour, the breeze did then moderate just as the fleet was trying to battle the incoming Spring Tide torrent at the Run, with several boats spat back out into the harbour. The efficient race team managed to tow the fleet through the funnel and out into the open bay, just as the sun came out and the wind did indeed start to drop to the predicted 12 knots – perfect for the final day.

Sunday’s first two starts resulted in general recalls, as the combination of a biased pin and the remaining flood tide carried half the fleet over early. Race four finally got away with Richard Sharp (GBR 90) winning the pin and then hitting the left hand corner – two tacking the beat to take a good lead that he held until the finish, hotly pursued by Allen Burrell, John Greenwood and Matt Walker – but the latter two were called over early, effectively ending Greenwood’s overall title ambitions.

By race 5, the rest of the fleet had cottoned on to the advantage at the pin end and then heading straight for shore, but the numerous big shifts tempted many to the right and the bend off the shore was not so dominant, so picking your shifts became more the priority. Crispin mastered the tricky snakes and ladders conditions to score his second win, with the consistent Mr Burrell second, followed by Simon Percival in third, just ahead of a chasing John Greenwood. With a strong flood tide against, getting around the windward mark was challenging, as the wind speed dropped under the cliffs and the dramatic shifts could leave you struggling to lay it where seconds before it had been a comfortable pass. 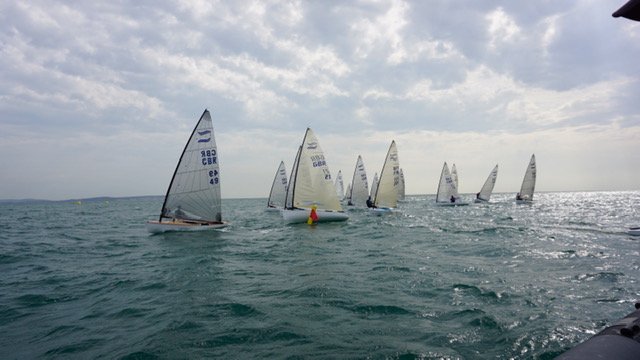 Jim Downer nails the pin whilst others scrape the line.

The lighter conditions on Sunday were much to the liking of first time Finn competitor, U23 sailor Drew Barnes. An international Laser Radial sailor, Drew has been around the Finn fleet from an early age, but at just 69Kg it was his first foray into competition. After finishing all three races in the punishing breeze on Saturday, he showed that you don’t have to be 6’3’’ and 95Kg to sail a Finn, posting an enviable 10, 12, 13 score line.

Race 6 saw Allen Burrell hold his nerve by going hard into the shore on the left, whilst other played the shifts up the middle, and despite a few dodgy light patches into the mark, he was rewarded with a big shift that gave him a 100 m lead around the first mark. Jim Downer (GBR 49), in the Open division (not yet a Master) chased hard, maximising the ‘Oscar ‘pumping flag that was still up but his good downwind pace wasn’t enough to catch the flying Essex boy. Lawrence Crispin, picking the best of the shifts towards the right claimed the third spot, keeping an eye on Greenwood in 6th to make safe his second overall position. Mike De Courcy (GBR 21) had his best result in 4th, just ahead of the consistent Kristian Sjoberg in 5th.

A hugely satisfied fleet sailed back through the Run in much more benign conditions, having enjoyed some taxing but great racing – proper championship stuff! For the UK Finn fleet – starved of the oxygen of healthy competition for most of the year, it was just what the Doctor ordered.

Ashore, event organiser Simon Percival presided over an outdoor and distanced prize giving, with some well received discount vouchers awarded to the top 12 and age category winners from sponsors Allen Brothers and Suntouched Sailboats. Allen Burrell emerged as the clear winner on 8pts, but the following five boats were all within 14 points, underlining the strong competition at the top of the Masters fleet. The ‘evergreen’ Howard Sellars won the Super Legends Category, with a great 20th OA, and at the other end of the age range, Drew Barnes was awarded the U 23 prize – proof that the Finn is a truly trans-generational class! 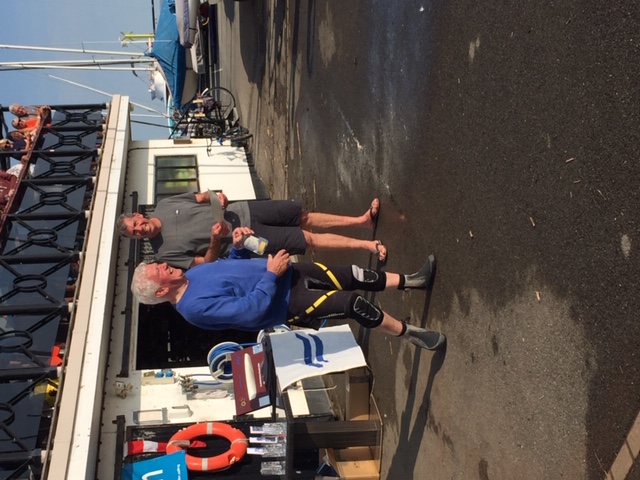 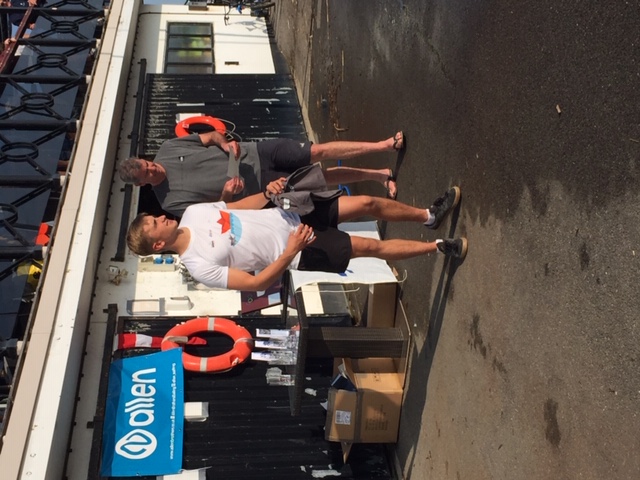 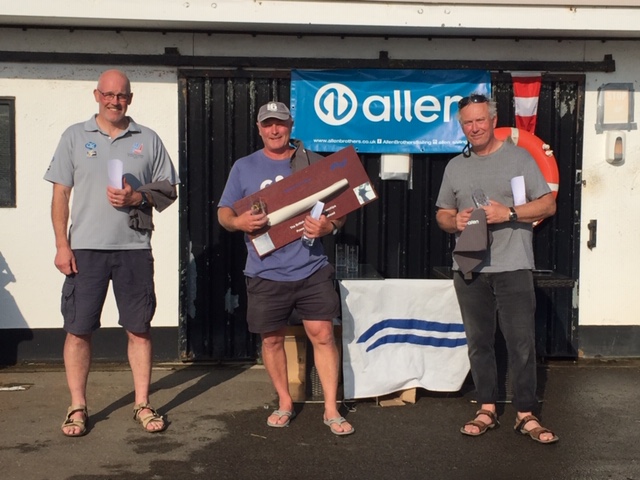 With one remaining British Finn event at Warsash on 10/11th October scheduled for the much reduced season, the hope is that no new restrictions will come in to disrupt a safe, distanced, single handed sailing competition. 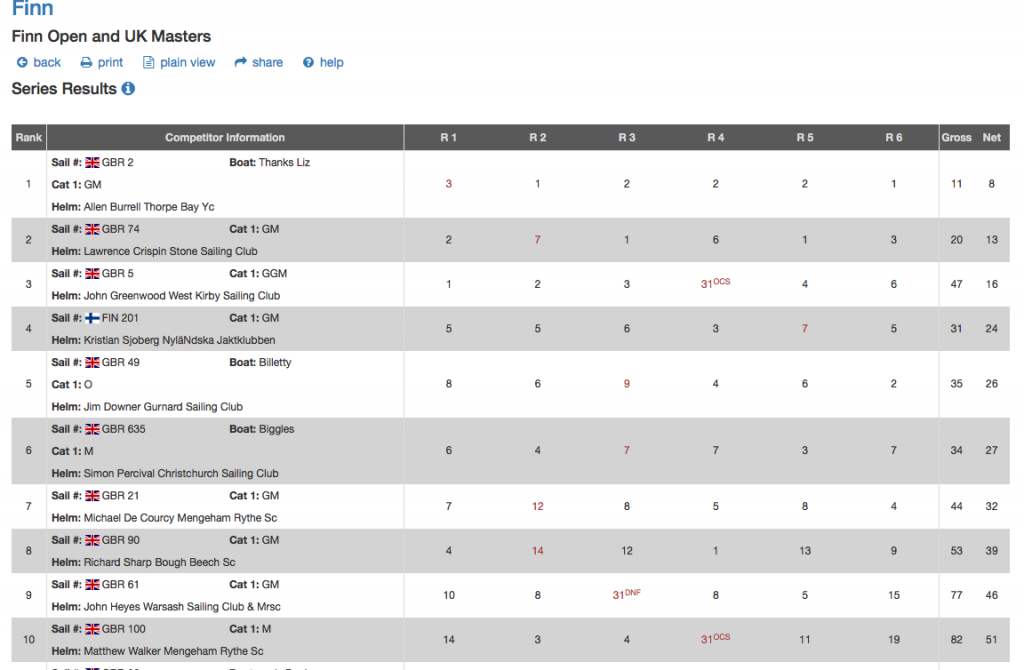