The countdown to the Rio 2016 Olympic Games began in earnest today for the 20 Finn sailors that are taking part in the Aquece Rio 2015 Test Event in Rio de Janeiro, Brazil. Pieter-Jan Postma (NED) has taken the early lead after two races on the tricky Ponte course inside Guanabara Bay. Max Salminen (SWE) is second and Tapio Nirkko (FIN) is third. Giles Scott (GBR) had a steady day with a 6th & 7th to lay 5th OA. 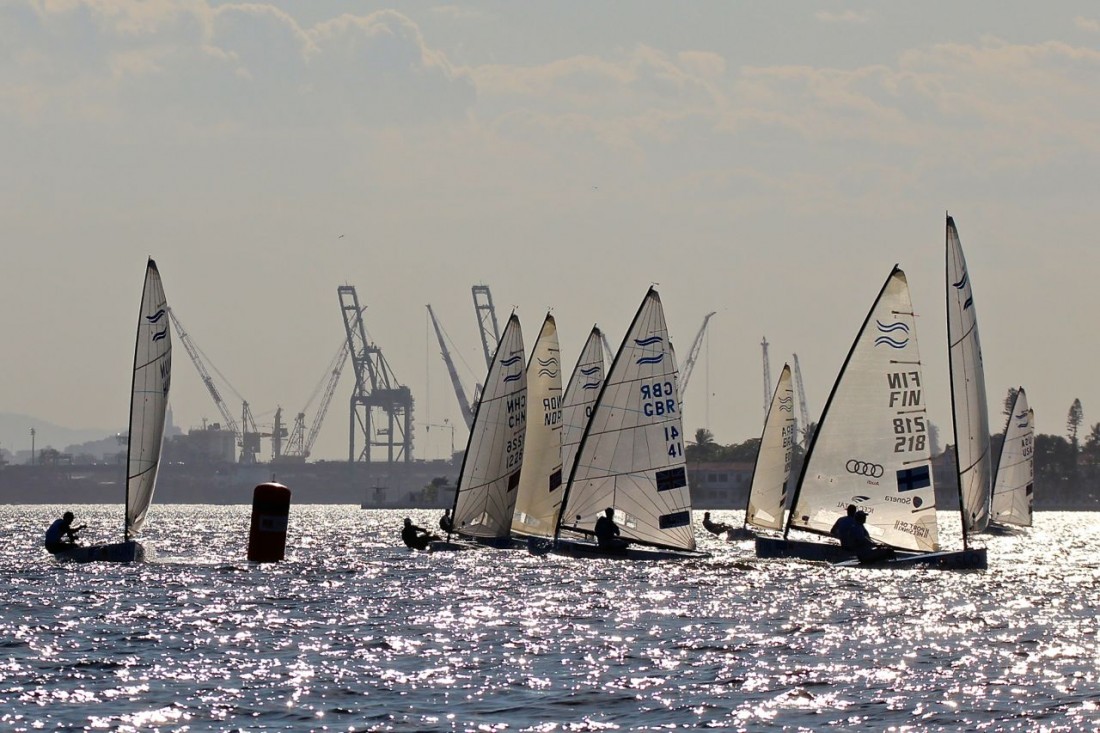 It might be the middle of winter in Rio de Janeiro, but with temperatures approaching 30 degrees it is like no winter many of the sailors know. Though racing for some classes started on Saturday, the Finn class opened its regatta today with two complex races close to the Rio-Niterói Bridge, the longest prestressed concrete bridge in the southern hemisphere, and the furthest course area away from the open sea.

The right side proved favourable most of the day. Anders Pedersen (NOR) led at the top mark in race 1 from the right side from Jonathan Lobert (FRA) with Pieter-Jan Postma (NED) close behind. Lobert took the lead on the run and continued to lead round the second top mark but let both Pedersen and Postma slip though on the final downwind in more pressure.

The second race followed a similar patten, but with a dying breeze that eventually shifted further right at the end of the race. This time Postma controlled the right and led all the way round from Jonas Høgh-Christensen (DEN) and Max Salminen (SWE).

Postma explained his day, “Today we had 8-12 knots and it was quite tough because we had the pumping flag, so it was a lot of hard work. For me, in the first race I had a very good start and a great strategy. I started at the boat end and and then tacked off all the way to the right and there was a bit more pressure there. I was fourth at the top mark and then I caught up to second. The last race was much the same. I had another very good start, and a very good strategy and am super happy that I won the race.”

“Today we had to look for the pressure both upwind and downwind. The winning was in the start and protecting the pressure on the right. You needed to have good starts to play your game and keep out of the boat.”

On racing in Rio, “I think the challenge here is that everyday we have a different course. We have just done three weeks training and here, and have done quite a lot of sailing. It feels like there is still quite a lot unknown, but the big things are settling in. Day 1 was great, tomorrow we are on Copacabana course, so we are out on the sea.”

Second overall, Salminen said, “We had a light sea breeze, with a lot of current coming in so we had long upwinds and short downwinds. I think that the time we have spent here is paying off and I am know I am fast in these conditions. I think you have to spend a lot of time here to be able to deal with all the different courses, both outside and inside.”

“For me, It was a really good day. I executed my plan pretty spot on. Mostly the right paid, but I think everyone figured that out. So it was really a fight for the lanes today. First of all get a good start and then be fast enough enough in your lane.”

Lobert, who sits in sixth overall said, “In race 1 I had a good start and managed to be on the right hand side, which was good with the current and the wind. I was second to the top mark and managed to pass the Norwegian on the downwind. Then I was leading at the next top mark but on the final downwind I went a little to far the the left and I got passed by one or two boats. In the second race I messed up the start and it was hard to come back, there’s wasn’t much I could do. Tomorrow we go outside and it will be different sailing in different conditions, perhaps more wind and bigger waves, so anything can happen.”

The event consists of six days of racing from Sunday 16 August to Tuesday 18 August and then from Thursday 20 August to Saturday 22 August. Wednesday 19 is scheduled as a reserve day. On Saturday 22 the medal race for the top 10 will be held. Over the course of the week the Finn class will sail on five of the six course areas, three inside Guanabara Bay and two outside on the open sea. The medal race will be sailed on the course area just off the Marina de Glória, where the event is being held.