Mengeham Rythe Sailing Club hosted the 2022 Finn Southern Area Championships over the weekend of 28th and 29th May 2022.

A great entry of 25 sailors travelled from across the country. In order to make the best use of the tide, there was an early briefing and the boats launched soon after 9am. The sun was shining, the harbour looked stunning and a decent north easterly blew the fleet out through Chichester Harbour to Hayling Bay.

The excellent PRO Robert McDonald and his regular team set a two lap windward-leeward course in Hayling Bay west, a good distance away from the Hayling beach.

The wind was softening as Race 1 began. The left, shoreside appeared tempting with little dark puffs coming off the land but those that stayed out to sea were rewarded with a more consistent breeze funnelling out of Chichester Harbour. At the windward mark Tim Carver ( Warsash SC) lead clearly from Dan Belton (MRSC) and Lawrence Crispin (Stone SC).

The downwind was extremely tricky but generally getting out to sea again seemed safer than the shore side, as again there seemed more pressure flowing from the harbour. At the leeward gate Tim went a little left, in towards the shore and Lawrence kept out to sea. Soon a little right-hand shift allowed Lawrence to tack across the fleet and lead at the final top mark followed by Tim and Dan.

The second downwind was painful for some as small gusts came and went and the unlucky Dan sat in a hole on the right whilst boats piled past. The tide was ripping east to west and care had to be taken not to end up being carried west of the gate. 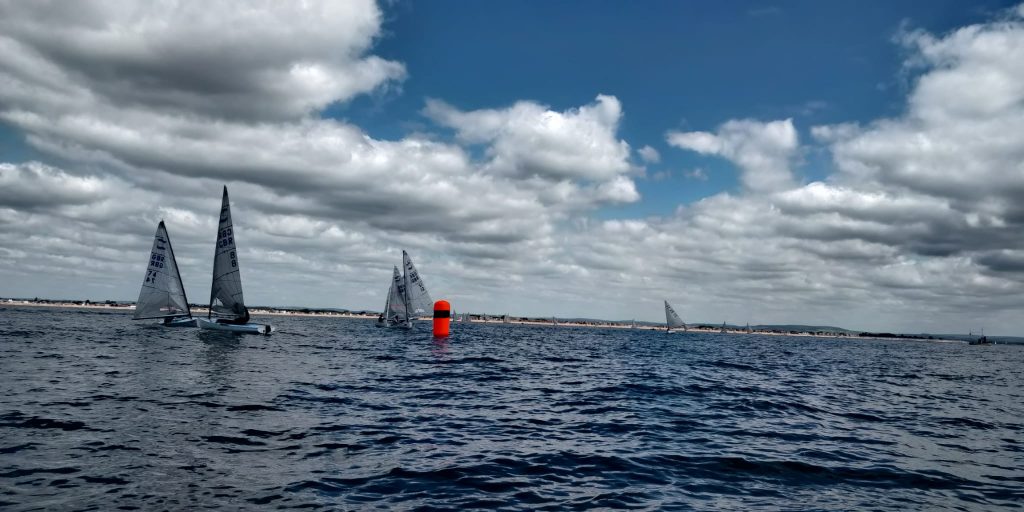 Our Super Legend Richard Hart was having a brilliant race, showing his usual great seamanship, going the right way and with great pace. By the finish Lawrence was clear ahead of Tim, John Heyes, Richard Hart and Richard Sharp.

The Finns then bobbled around as the Northerly wind disappeared in its fight with the sea breeze. In the and neither won and the PRO signalled the end of the day. The club safety boats quickly scooped up the Finns and towed the fleet back in through the harbour against a very strong tide, in good time to avoid any muddy walks up Mengeham creek.

Special mention must go to Matt Walker who had enthusiastically sailed out late to join us for the scheduled Race 2! The fleet arrived back in the sun at the club to a fantastic tea and a beer or two. 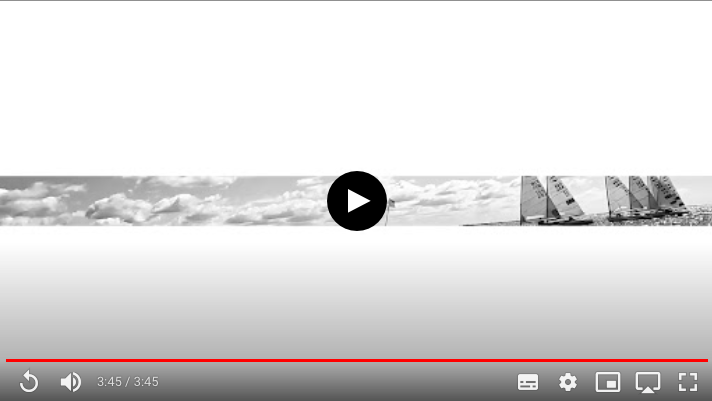 The sailors gathered again very early to be on the water for 9am. Some had clearly used the Saturday afternoon and evening “rehydrating“ in true Finn fashion!

The fleet sailed out to Hayling Bay in the sun and with a moderate North Easterly breeze. The same course configuration was swiftly set up so the start sequence could begin on time in order to get 3 or 4 races in.

The first start was recalled as many went early at the pin end, and the black flag then appeared. The fleet then got away clear on the second attempt.

It seemed that the left was favoured on the first upwind and Kristian Sjoberg made the most of this – arriving at the top mark with a good lead. Effectively the race was then on for the minor placings.

The downwind legs were again difficult and the boats that managed to stay in the lines of breeze benefited hugely. There was a tight race behind Kristian and at one stage heading to the last leeward gate 6 or 8 boats were almost level. The right-hand gate mark appeared to be slightly upwind but the left one appeared closer and up-tide to the finish.

At the finish the order was Kristian, Mike de Courcy (who had missed Saturday’s race), Lawrence Crispin, Richard Sharp and Russ Ward.

The black flag ominously stayed up as Robert McDonald strove to get as many races in as possible during the tidal window.

The best option again appeared to start at the pin and tack off fairly quickly, to get to the generally stronger pressure on the right. Kristian, Lawrence and John Heyes all came off the pin, with Lawrence taking first, as soon as he could cross the fleet. Kristian held on a little further before he tacked across, but fatally the breeze around him suddenly died, dumping him in mid-fleet.

On the second lap Howard Sellars, Richard and Dan took the left hand gate and kept going out to the right. The wind died to the left, stranding those, including Lawrence who had been ahead.

A big right shift and more pressure allowed those on the right to steam into the top mark. Roman Khodykin nipped in ahead of Richard and John on Port, but unluckily clipped the mark and took a penalty. A huge gust and shift nearly inverted the leaders at the mark – Richard and John having to take massive avoiding action as a sudden gust pivoted both boats towards each other.

At the final gate, Richard was just ahead of John and covered him tightly towards the finish line. Lawrence and Roman, rounding some lengths astern took advantage to use a shift and the lee bow on the right to squeeze ahead of John, whilst Richard was just able to hold onto his lead to take the gun, ahead of Lawrence, with Roman and John crossing in a photo finish. The fleets’ second Super Legend Howard Sellars completed an excellent race to finish strongly in 5th.

A few boats headed for home after this race.

By now, more sailors were keen to start nearer the Committee Boat, to stay up-tide and get to the stronger pressure coming out of the harbour sooner on the first beat. An inside lift benefited those to the left.

On the second beat the breeze again shut off on the left, allowing a few boats out to sea to come back towards the front of the fleet.

On the final downwind the breeze was pretty patchy and it was toss a coin time. Mike, John and Lawrence were vying for the lead, closely followed by first time Finn sailor David Mitchell who was having a fantastic race in his new boat.

Mike led from John at the gate but both John and Lawrence got past on the tricky approach to the finish, john squeezing up on port to take advantage of the lee bow tide, lifting him up to the blue flag of the finish line. A last-minute header meant a quick take to cross the line, John and Lawrence crossing ahead of Mike, Dave and Sander Kooij who was also having a great race.

The sail back into the harbour was long against a strengthening tide but the fleet was efficiently met with trolleys and another very welcome tea at the club. The fantastic selection of food included something called salad but needless to say this was dodged by most of the hungry fleet who targeted the pork pies, scotch eggs and cake!

Once the results had been confirmed the final order was:

The prize-giving was carried out in the sun on the club balcony and the fleet departed after a lovely weekend’s sailing. Lawrence thanked the Mengeham Rythe club for its excellent race organisation and hospitality.