A strong turnout of 40 Finns gathered at WPNSA for the 2022 Ronstan UK National Championships. The growing popularity of the class was evidenced by the presence of several top returning Finnsters, including multiple Endeavour Trophy champion Nick Craig and BFA U23 squad graduate, Cameron Tweedle.

Friday’s opening races were efficiently set up by PRO Brian Drake within Portland Harbour, with three laps of a proper sized championship windward /leeward course. Conditions were perfect building on epic, with a building breeze of 16-20 knots and glorious sun. Youth and a strong downwind work ethic won the first race as Cameron Tweedle demonstrated his free pumping technique to take the win from Phantom class champion Andy Couch, with Nick Craig quickly getting back his feel for the Finn in third. Experience and fitness came to the fore in race two, with his winter training programme paying off for Ex Laser World Champion Lawrence Crispin, whose pace downwind carved out a big lead ahead of Cameron and Andy Couch. With only 5-degree shifts to play with, the leaders tended to play the wind bend on the left-hand side of the course under Portland with occasional gains made on the right by those willing to find an alternative route upwind. 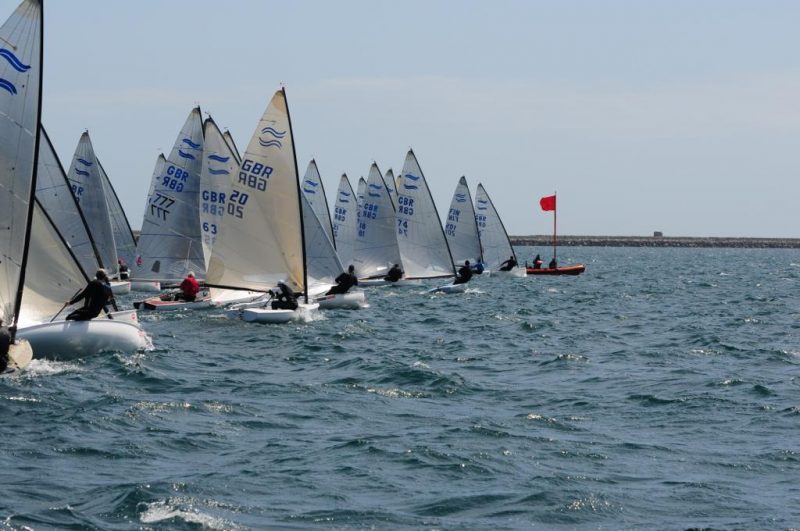 The third race saw many tired legs as the wind built to 20 knots plus gusts and despite the Oscar free pumping flag still flying there was little take-up of the freedom outside the top few! True to the developing form book, Cameron took the win from a closing Crispin, with the consistent and much lighter Nick Craig in third. 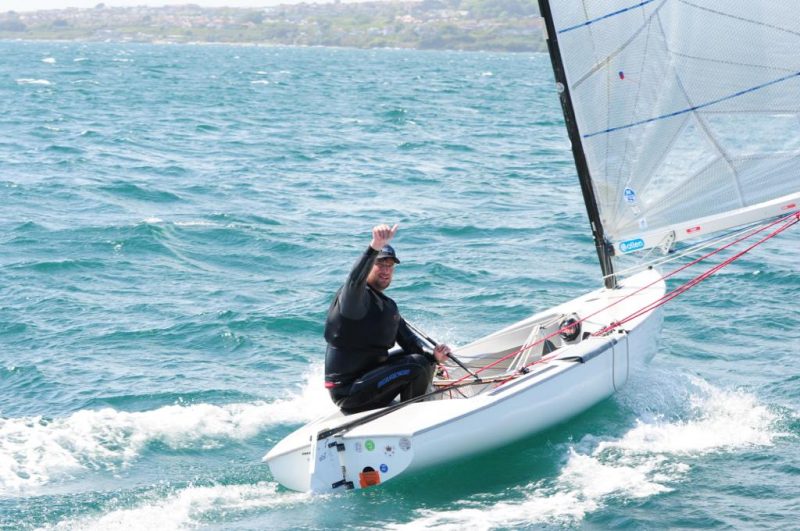 Saturday’s forecast of a light and shifting breeze from SE to NE proved accurate, so the morning was spent in wide-ranging dinghy park discussions on the latest new kit and tuning.

The hard-working race committee called the boats out to the outer end of the harbour for a race at 2pm, just as soon as the new 7 knot easterly breeze had stabilised. The fleet started cleanly first time under the ‘U’ flag, with boats on both sides of the course sniffing out the greatest pressure. In sharp distinction to  Friday, it was the turn of the lighter weight sailors to show their ability, with Fergus Allen stretching out a useful lead from hunting down the best of the small shifts, leading around the 3 lap course by a clear margin. Lawrence Crispin proved that it wasn’t only a lightweights race, to move through to second on the tactical upwind legs, holding off John Heyes in third – narrowly holding off a late surge on the finish line from Kieron Holt.

A second race was quickly in process and was again a highly tactical game of chess with numerous place changes upwind, as the sailors looked to exploit every small puff, wind bend and shift. Nick Craig used all his multi-class experience to work the beat to lead at the end of the third upwind, just ahead of Heyes and Kristian Sjoberg. It was great to experience the mutual respect and sportsmanship of the top sailors as they allowed each other to cross on port, avoiding overly aggressive moves whilst still using every effort to get ahead of the competition. On the final downwind, John Heyes played the left of the run, finding a useful gust to pass Craig and claim an unexpected win.

Saturday evening was taken up with the sailors coming together to have their say at the class AGM, where the memories of Ray New and Richard Blowman were shared with great sadness and their contributions to the class were remembered.

On Sunday morning, competitors woke to rain and a squally 20 knot plus breeze from the east, not a very inviting prospect – so with the wind forecast to build at lunchtime the decision was taken to schedule just two races for the day. Whether this decision helped or not, a number of sailors took to the water in a breeze which was then gusting over 25 knots.

The race got underway and first to the windward mark was Lawrence Crispin followed by Simon Percival and Cameron Tweedle. Down the run Simon and Cameron lost out to Fergus Allan and Kristian Sojberg who showed great pace, picking the breeze and waves down the left side of the run.

Cameron fought back into third place on the next upwind leg working the right side of the course, but could not catch Kristian or Lawrence who both excelled in the conditions which had by now started to subside. Lawrence ground out a big lead to take the gun for the win at the same time fork lighting was seen in the distance together with the rumble of thunder – perfectly staged!

Given the risk of thunderstorms in the area, Brian Drake took the decision to send the fleet back ashore to the academy. It was then a clear decision to bring the championship to an end, given the weather risks to sailors that were developing

At the presentation, Cameron Tweedle was crowned BFA Finn National Champion, winning the prestigious Sunday Times Gold Cup and first Senior – a fitting tribute to the foresight of Ray New and the BFA in fostering the talent of U 23 sailors looking for a pathway to championship success. Cameron can now add his name to the illustrious list on the Cup, alongside Vernon Stratton, Chris Law, Ian Percy, Ben Ainslie, Giles Scott and many more.

Every competitor was awarded a prize from the generous supply of sailing products from Ronstan, together with a valuable discount voucher. The competitiveness of the fleet was underlined by Lawrence Crispin, who was only a point behind in second place and also claimed the first Grand Master title. Nick Craig was 5 points astern in third and won the Master category and was so back in love with the Finn he promised to buy a boat! 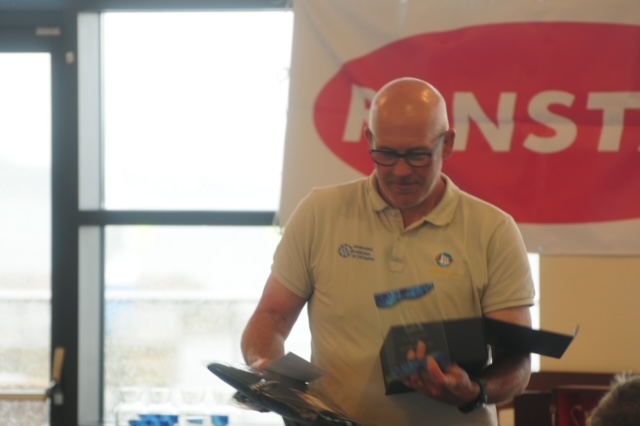 Kristian Sjoberg won the first Great Grand Master title in 6th place and Howard Sellers claimed the battle of the Legends in 28th place by a point from Peter Blick and Super Legend Richard Hart. 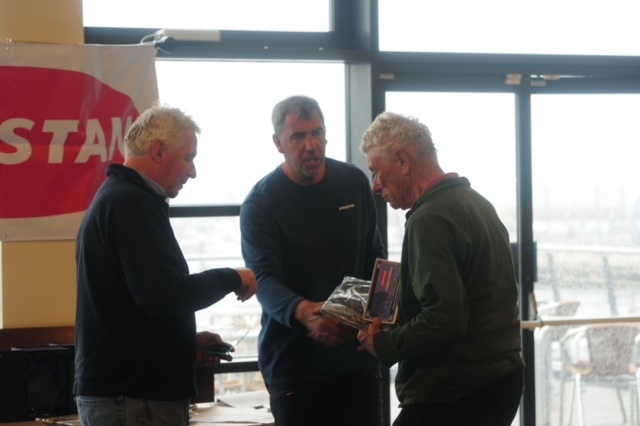 Newly elected BFA Secretary Simon Percival rounded the celebrations off by thanking Pete Allam’s event team at WPSA for an excellent and very friendly event and recorded the BFA’s thanks again to RONSTAN  and The Old Salt Loft for supporting another successful UK Finn National Championship. 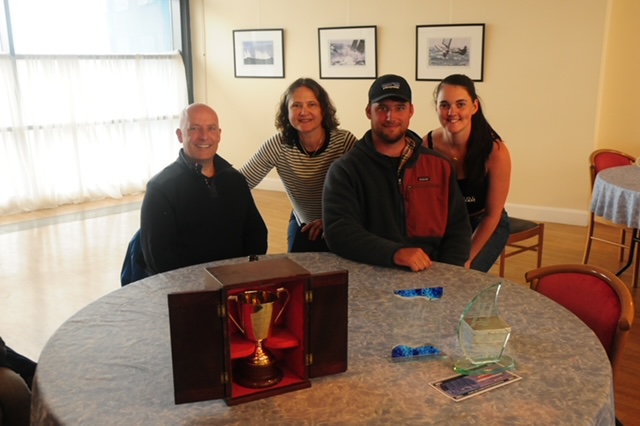 The visiting on the water judge, Sian was so impressed with the fleet’s attitude and on the water behaviours she had little trade all weekend and said the Finns “Were one of the nicest classes ever”, and she was keen to come back as a judge again – praise indeed… 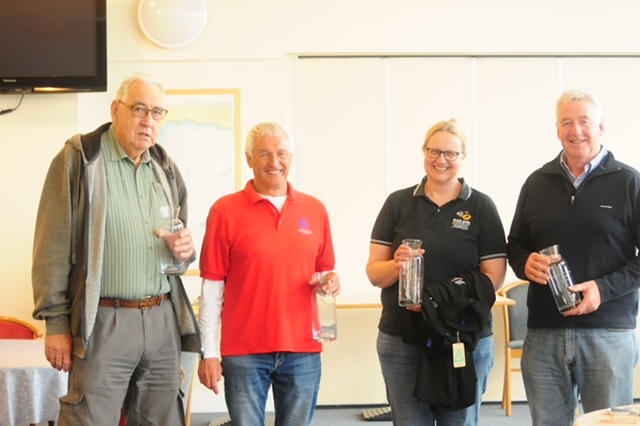