The word on the street is that Finn Sailors love a good blow and that is exactly what was served up at Keyhaven YC on 16/17th June, for the Finn Masters 2018.  On an overcast Saturday morning, 27 sturdy sailors turned up to race, either enticed by or in spite of, a pretty feisty forecast.  The nervous excitement in the boat park was palpable, with the anemometer already picking up some meaty gusts, it was big breakfasts all round and mucho boat tweaking in preparation.
Order of the day for Saturday: 3 races, back to back, windward – leeward.  Day one saw 3 hectic, noisy start lines get away cleanly, with Bagnall going for the most audacious port hand flyer at the start of race one, on a line which left Tweedle and Smith caught in a multiple Finn pile up around the pin end.  With most of the fleet choosing to go up the right hand side, the first beat established what turned out to be the general rhythm of the weekend, a line of hard working Masters chasing the heels of the U23 squad sailors, mostly led by Dickson, Tweedle, Simpson and Skulczuk. 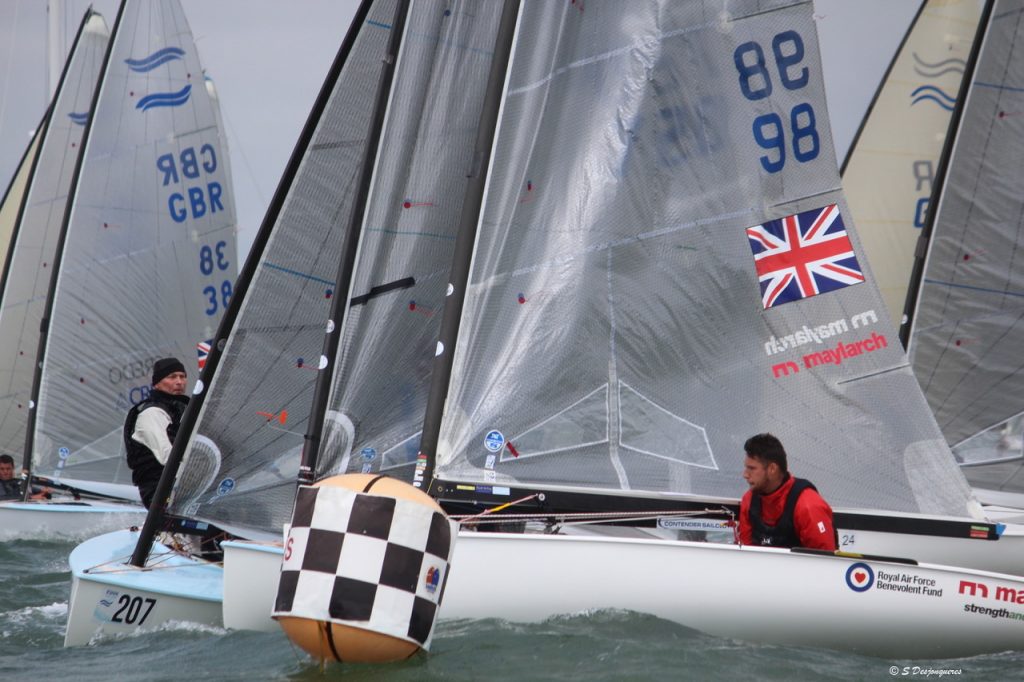 By the end of the first race, the weather had seen 5 sailors head for home and with the F5-6 SW becoming a solid F6 gusting 7, the wind against tide was beginning to kick up quite a chop and was undoubtedly testing the sailors’ mettle.  Rounding the windward mark and heading back down to the gate now became a lesson in balance, trim and sheer nerve.  For the U23’s at the front, the run was operation zig-zag and sail pump, whilst standing up, driving the boats down the waves in the pursuit of greater boat speed.  Further back down the fleet, the run was more a game of gunwhale clinging survival sailing trying to outrun the wave behind whilst not ploughing into the wave ahead, all the while trying not crash gybe into the inevitable swim. This downwind leg enjoyed some pretty spectacular capsizes to windward, several dicey death rolls and by race 3, broken masts, ripped sails and one capsize too many saw the start line dwindle to only 14 competitors.  Both U23, Dickson and Grand Master, Phare even gave their Finns the chance to sail without them, Dickson’s attempt to chase after the disappearing transom would have given Ian Thorpe a run for his money. All in all, at the end of day one it was the U23 sailors who took the wins, Dickson taking race 1 and Simpson winning races 2 and 3.  Following up on the leaderboard was best placed Grand Master, Crispin, who despite his sail falling down half way down the run managed to yank it back up again to post 3 top ten results. Keyhaven’s Blick finished the day sitting as the top Great Grand Master and Holt as the best placed Master. 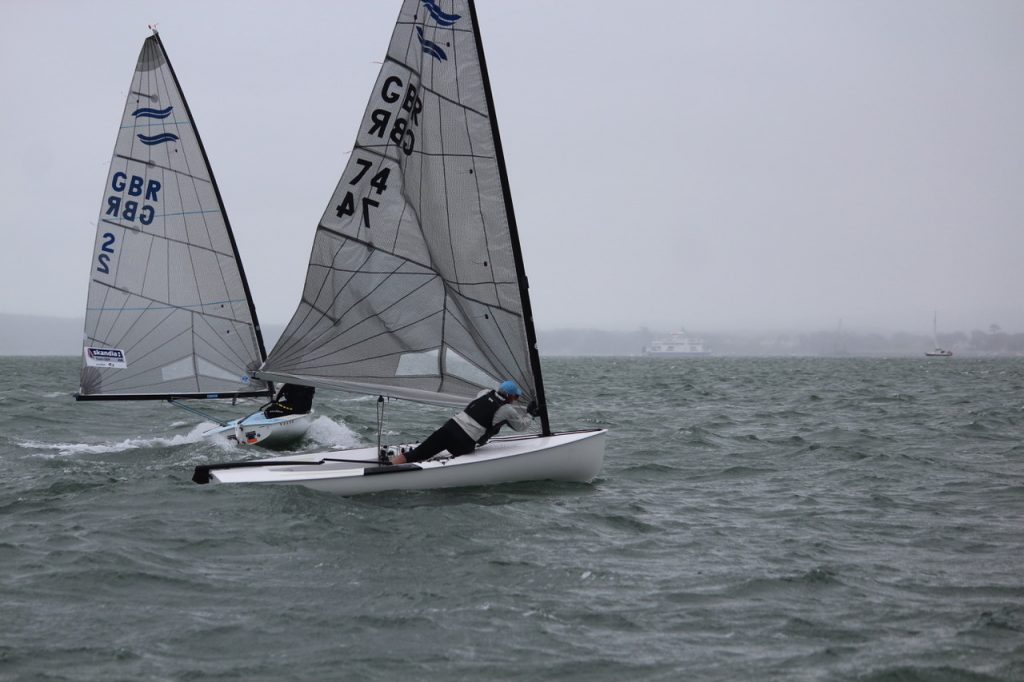 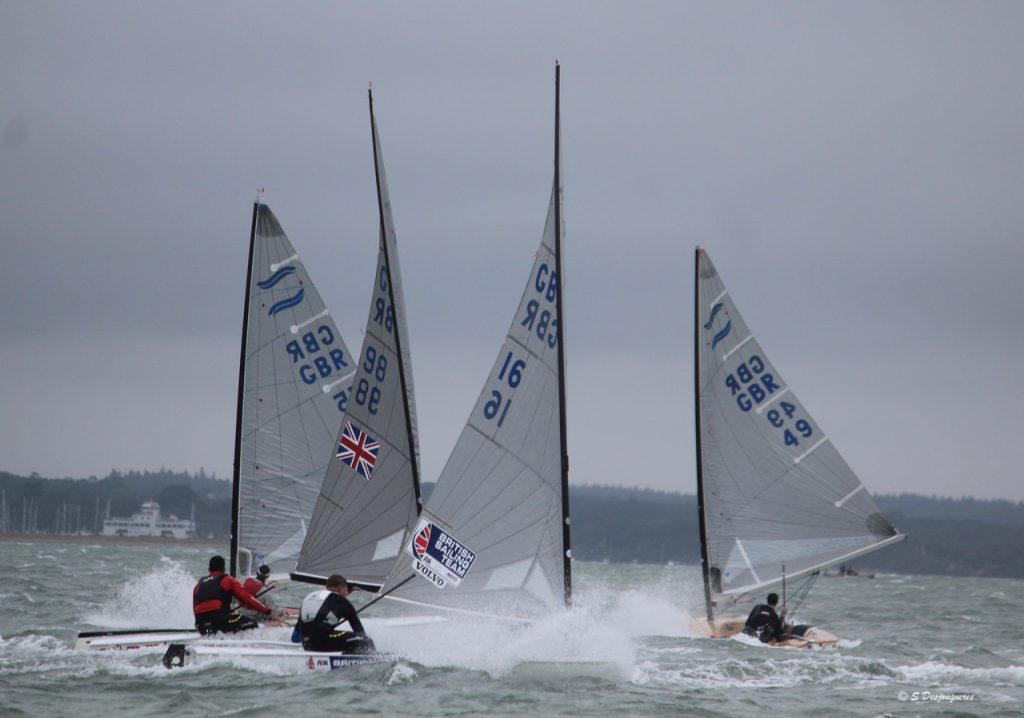 Day 2 dawned with slightly easier conditions, but only slightly easier.  The wind was a steady F5 SW and Race Officer Nigel Walbank and his crack race team ordered 3 more back to back races but with a slightly smaller course this time for the rather battered sailors.  Race 4 got away cleanly with the U23 sailors once more gaining the advantage, Simpson creating a sizeable gap between himself and the rest of the fleet and never relinquishing the lead from start to finish.  A couple of over eager sailors undid themselves on the start line for Race 5 and were obliged to take the necessary punitive measures in a race that belonged to Tweedle in the continued battle of the U23’s. Bagnall was up to his port hand flyer tricks once more and nearly made it as first boat to the windward mark but was pipped to the post and finally ended his race in 10th place.  With the wind backing, the Race Team ordered a quick shuffle to the left of the windward mark and spreader, placing the course further into the Solent and choppier waters.  The last race of the weekend sought to undo Tweedle who was over the line on the start and ended up last boat to the windward mark on the first leg.  But In a show of expert pumping on the downwind legs, the U23 sailor chomped his way up the fleet managing to bag an impressive 8th place in the end for his efforts in a race which gave Simpson his 4th win of the meeting. 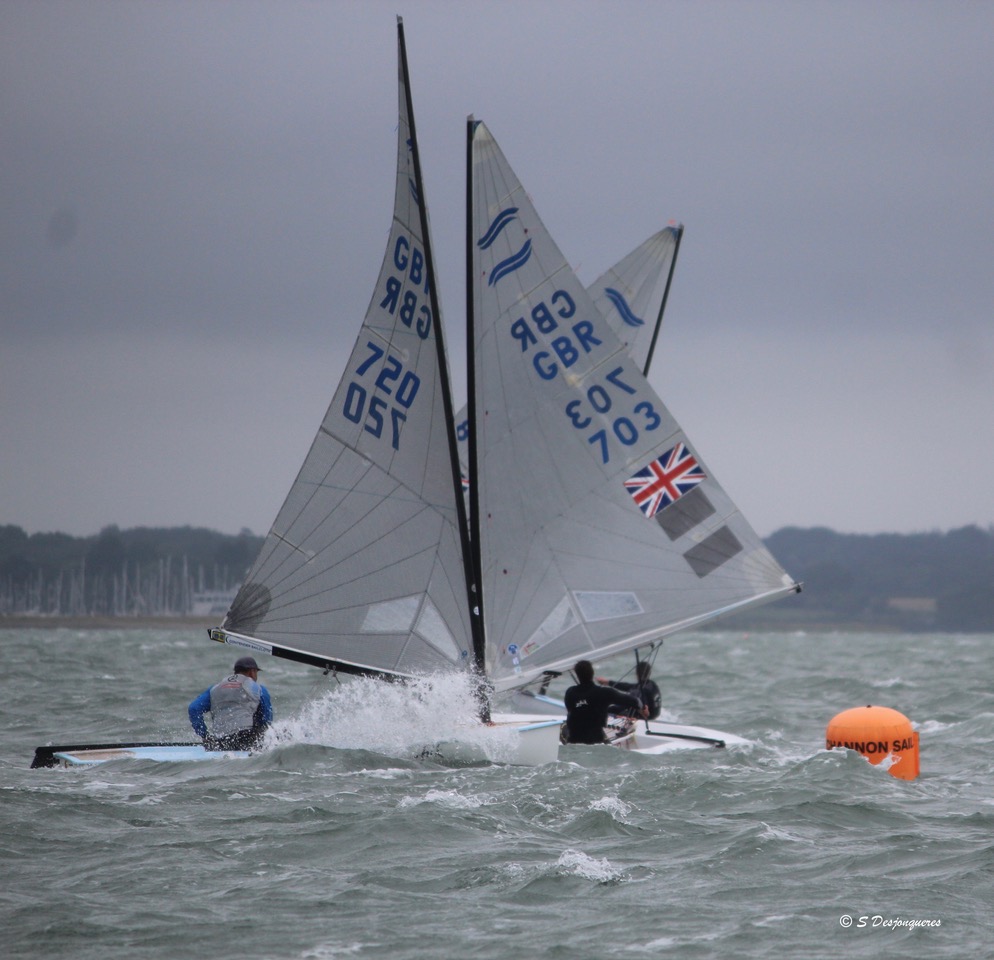 In the Masters category the weekend battle was between Keyhaven’s Grisley and fellow sailors Cole and Holt with Holt coming out on top with six points separating him from 2nd placed Grisley and one further one point between Grisley and Cole.   However, the overall winner of the Finn Masters Trophy for 2018 was Grand Master Lawrence Crispin who impressively put in 6 top ten results and rightfully earned himself the top honours and his name on the Finn Masters plaque. 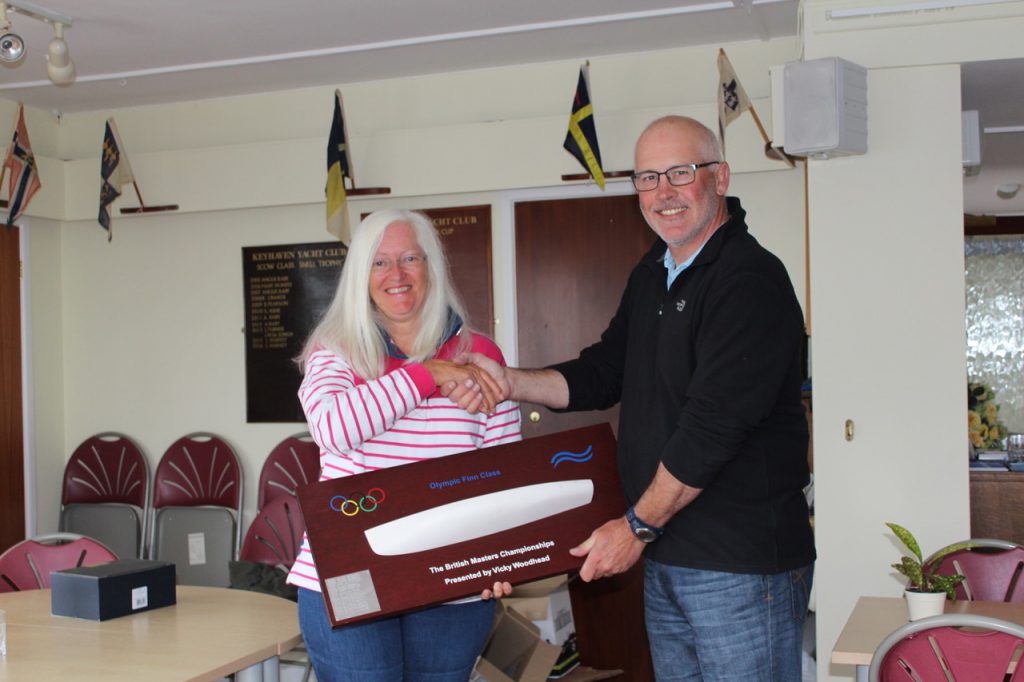 Lawrence Crispin, 2018 Masters Champion
Congratulations to all the competitors, the weekend was full of excitement and exhilarating sailing.  A big thank you to the Race Team and to Nigel Walbank the Race Officer, to Malcolm Lee who kept it all together on shore, to all those who spent several soaking wet hours out on the water in RIBs and to the great galley team who fed and watered everyone all weekend.
Report by Cy Grisley
Full results here