Draycote Water Sailing Club hosted the 2021 British Finn Association Inland Championships over the weekend of 11/12 September, and what a fantastic Championship we had! Club organisers and the Principal Race Officer Chris Avery did an outstanding job in providing clear race instructions and managing the racing.

From the start of the first race Chris Avery took control of the fleet to ensure we maximised our time on the water. His intent, due to the windless forecast for Sunday, was to run 5 back-to-back races on a windward leeward course on the Saturday, with a final trapezoid to finish. The fleet of 22 boats experienced some really close racing in the shifty 6-10 knot breezes. Every race provided slightly different conditions with no one side of the mile long beat paying every time. Gust awareness and shift anticipation paid off for anyone with aspirations of leading a race. Downwind sailing was equally as difficult with fingers of breeze propelling some along briefly at planning speed whilst others hunted for the wind.

The fleet welcomed Irish sailor Colin Leonard back in a boat he borrowed from Will Patten. Colin who is a consultant in hospital has hardly sailed during the COVID epidemic as he was extremely busy at work. Imagine his and everyone’s surprise as he quickly emerged amongst the top three in the first race and even spent time in the lead. With the breeze registering 10 knots on the PRO’s anemometer the fleet were seen to pump and work extremely hard throughout this race, to the later detriment of some, leading to some hard-fought battles especially off wind. Lawrence Crispen from Stone SC took the first race with Colin Leonard in second and Allen Burrell in third.

The second race saw a reduction in the number of laps to two windward leeward legs and one trapezoid loop. With many boats at the pin end of the line an early tack to port by John Greenwood saw him open a good lead which was never challenged through the race. He was able to pick his shifts upwind and extend to a commanding lead over the fleet. Lawrence Crispen again showed his intent to become Inland Champion with a second place followed by Andy Couch, who was back in a Finn again after a year or so.

Race three and bodies were beginning to tire! Allen Burrell established a good lead on the first windward leg and run and held off the challenge from the resurgent Collin Leonard and Andy Couch in third.

Race four was a hard-fought start with several boats almost over the line, but the fleet were given the all clear by the PRO and sailing in a weakening breeze to the windward mark. In a tight race with the top ten places ever changing, this race was a challenge to everyone. By the final lap Colin Leonard had established a good lead and held it to the finish with Andy Couch gaining another top three place followed by John Greenwood.

The final race of the day saw confusion and controversy. Bodies were weary but one last effort would see a counting series with a discard. Starting at the pin end with no boats around him Martin Hughes took the lead at the windward mark pursued by Colin Leonard and the rest of the fleet. However, he had a good lead which he held for the windward leeward section only to be out sailed by Lawrence Crispin on the final beat who led around the windward mark. As the two sailors sped down the reach leg the mark they were heading for was heaved in the back of a boat and sped off to the finish area, leaving no mark to round. Consternation for the leaders and some interesting conversations across the fleet saw Martin go straight ashore and Lawrence led the fleet directly to the next mark then to the finish. With the fleet not sailing the desired course Martin protested. The entire fleet really wanted this race to count to give a discard as the forecast for Sunday remained dire. Sailing ended with many tired and exhausted bodies ashore and much discussion about the fairness of counting the race.

Never let it be said that you cannot cover the distance inland. One sailor had a GPS running through the event and recorded the chart below. Sailors sailed some 48 Kilometres in the 6 hours afloat, with the owner of the GPS expending 4000+ calories. No wonder sailors were ready for some food and sleep! 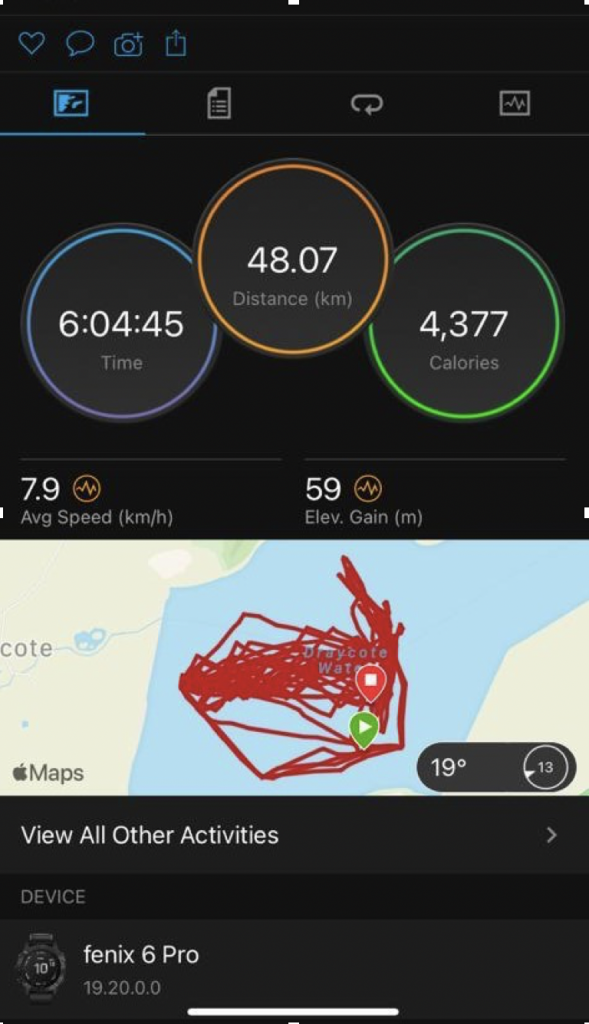 Sunday morning heralded no wind and no prospect of wind. Whilst Martin Hughes and others discussed the protest in the committee room the rest of the sailors began to pack their boats away. In the end, the protest committee agreed the race should stand and that Martin be reinstated to second, behind Lawrence Crispin. 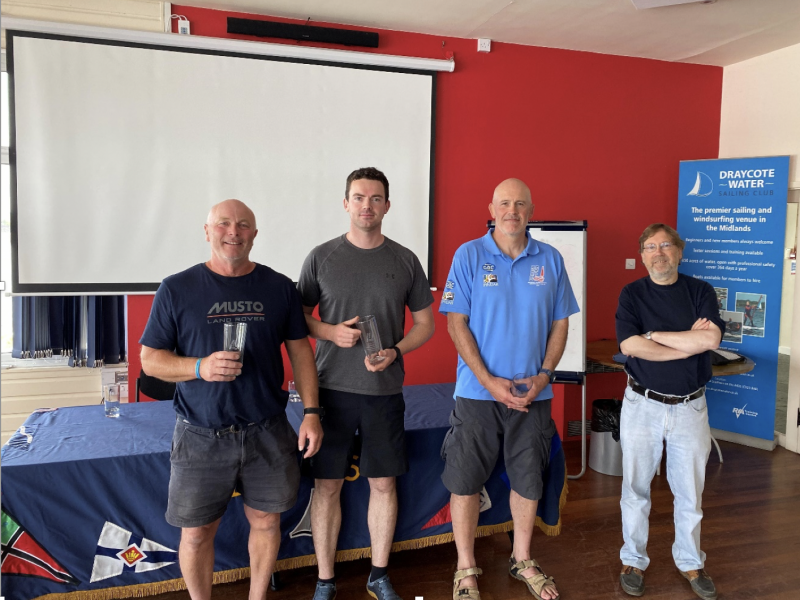