46 Finns travelled to Brixham, on the southern shores of Torbay, from as far afield as Japan, Abu Dhabi and Sweden. Sailing on the waters of the 1948 Olympic regatta, Torbay proved an ideal location for the Championship, providing racing on every day of the regatta despite a very light and variable wind forecast for the whole weekend. 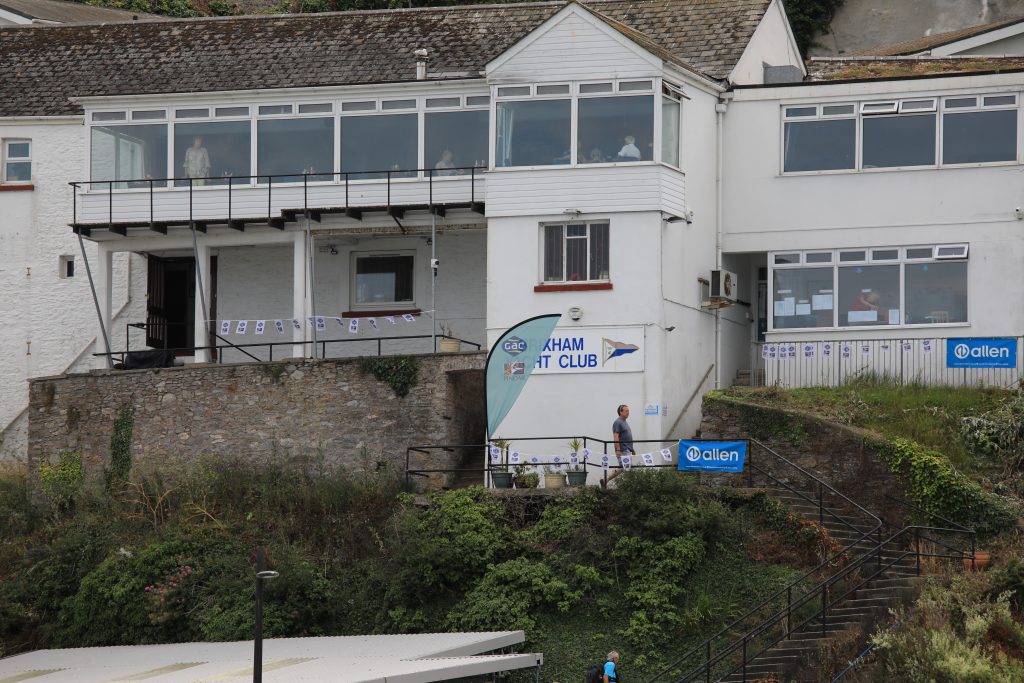 Friday’s first race was held after a delay ashore, as a 6-7 knot breeze stabilised from the NE. Race Officer Sean Semmens set up windward /  leeward course with a square line but last minute flick to the left sent Silver Cup bronze medallist Hector Simpson, Allen Burrell and John Heyes dashing to the pin end to take advantage of the shift. Simpson and Burrell soon tacked off to the right, expecting the forecast general movement right, but Heyes stood on a while before tacking and managed to stay in a little more pressure to the left of the fleet. High and faster, he comfortably rounded the windward mark ahead of Simpson and the fleet on the right. The Class Chairman managed to hold off Simpson, but as the breeze became more patchy on the second upwind the ex British Sailing Team member showed his skill to cross ahead at the second upwind. Youth prevailed further as current GAC Pindar U23 squad member James Skulczuk soaked through on the right of the run as did Soling Olympian Stefan Nordstrom (SWE) on the left, to claim second and third respectively.

A second race was soon underway after a swift move of the course axis to match the shifting breeze. This time the U23 sailors lead the field, clearly benefitting from their experience gained from sailing the European tour – racing at Palma, Genoa, the Athens Europeans and Kiel Week. Impressively fit and also with matured racing skills, Callum Dixon of the GAC Pindar team mastered the shifty and patchy breeze to take the gun, (a real one!) with training partner James Skulczuk second and another U23 Jack Arnell from Christchurch 3rd. It was left to ex Laser world champion Lawrence Crispin to keep the Masters end up with a fourth place finish. 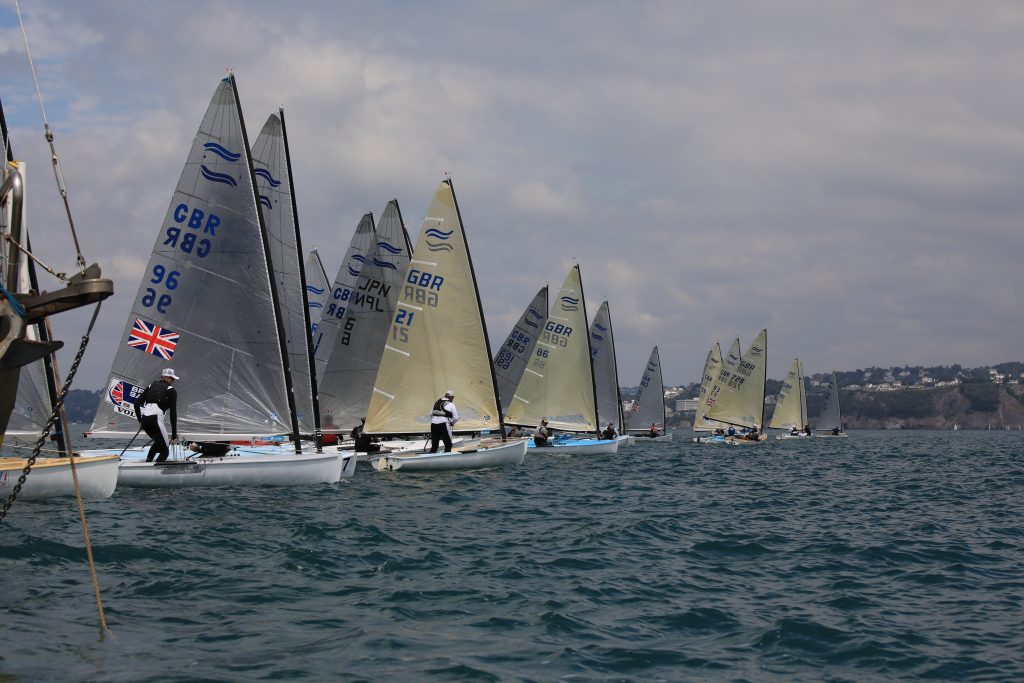 A third race was attempted but the late afternoon breeze proved too fickle and the start was aborted as the breeze flicked again, rendering a fair course impossible.

Saturday’s forecast was much the same as the light North Easterly dominated, and no sign of a sea breeze. The efficient race team again held the Finns ashore until the breeze filled in at midday, who were swiftly launched down the club’s steep slipway by an army of volunteers and an excellent Beach Master who stood in the water up to his chest to hold boats whilst sailors fitted their rudders – a godsend for single handers!

When the breeze arrived it was more South Easterly, coming in over the Brixham headland. With a windward mark under the shore, the right hand side paid, with Hector Simpson reading the shifts best to finish first, ahead of the Japanese Hajime Kokumai, currently campaigning in Europe for Olympic selection. James Skulczuk pulled up to third, Allen Burrell a strong 4th and Callum Dixon 5th. 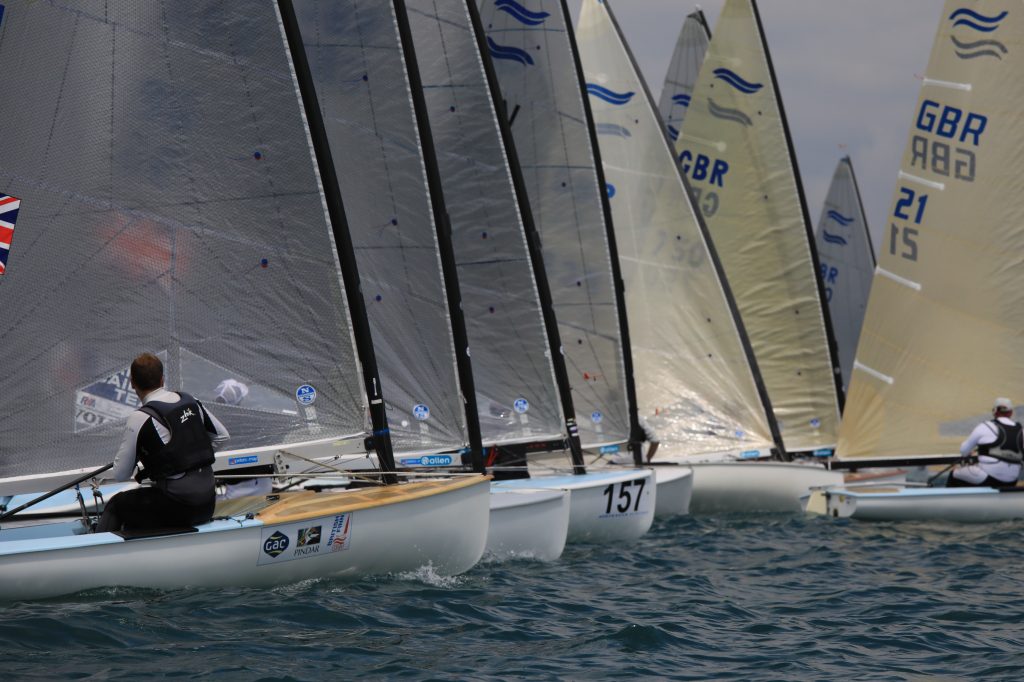 Dixon and Skulczuk had flown back from Kiel Week especially for the event and with their boats already in Italy for the U23 World Cup in Anzio, were kindly lent boats and masts by BFA members – a typical example of the friendly and generous nature the Finn Class is renowned for worldwide.

Race 4 was set for 3 laps, which looked a lap too far as the 6 knot breeze gradually died away on the second run. Another ex British Sailing Team member, Pete McCoy had dug out a huge lead and was somewhat surprised not to see a shortened course flag as he rounded the gate. As the fleet crawled back up the beat, those on the seaward side were gifted a new wind with greater pressure, that saw a group of boats reach into the final windward mark, much to the dismay of those who had spent an hour painstakingly working their way into the top 6 positions! However, McCoy, Dixon and Yuki Nishio, (JPN – another Olympic contender) still had enough of a buffer to hold off the latecomers.

Again a third race was attempted, but after a long wait for the new breeze to settle the start was aborted as the breeze finally died and the fleet headed home for the Championship dinner, an excellent meal hosted by the Brixham Yacht Club.

With the most promising forecast of the weekend set for Sunday, racing was able to start on time, after the BFA’s AGM where members expressed their deep concerns over the questionable actions of World Sailing in dropping the Finn from the Paris 2024 Olympics and the RYA’s lack of support for a Class that has delivered them every gold medal for the last five Olympiads. 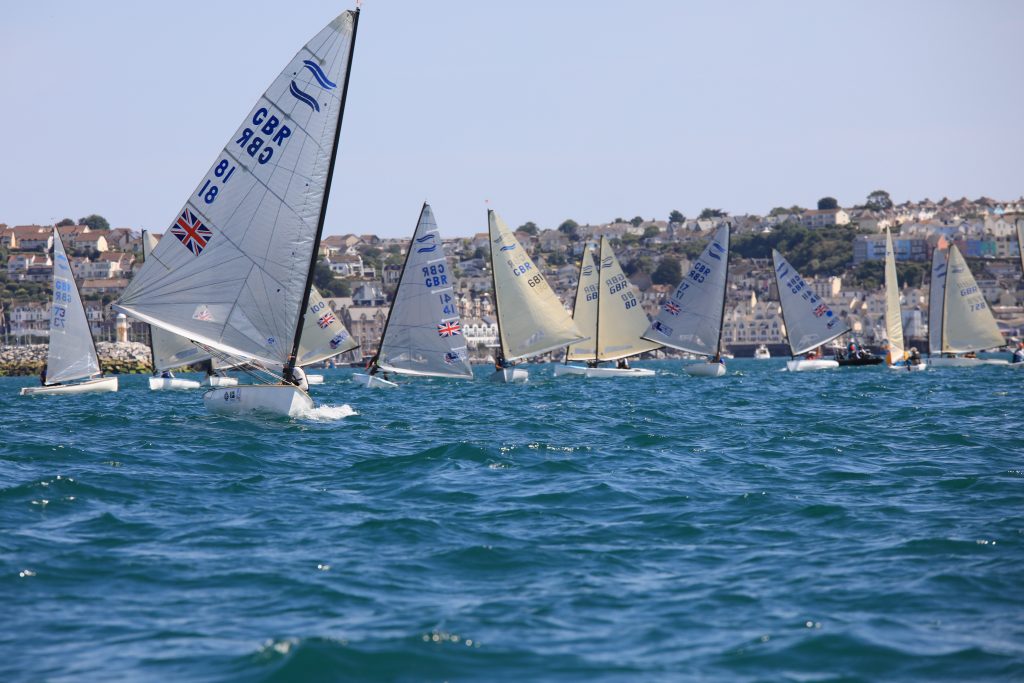 Sunday’s breeze was straight into Torbay from the east, so hopefully more stable a direction. The left hand side initially looked favourable with stronger pressure on the Torquay coast, but the early leaders from the left had their hopes dashed as the breeze headed by the top mark and the boats on the far right romped in. Those that then tried the hard right route on the second upwind where further dispirited, as the left seemed to pay! However, the cream rose to the top as usual, and the most practiced and in-form sailors dominated, with Skulczuk stamping his authority on the series with two wins. To prove how easy it was to get caught out by the narrow bands of pressure and unpredictable direction, Callum Dixon could only climb to 13th.

Experience is also worth a lot in such conditions, and Olympic campaigners from earlier generations showed their skills are never lost. Lawrence Crispin climbed the final standings with a 3, 8, 1 and GGM John Greenwood posting his best day’s score of 4,6,2. Harwich Town’s Ady Pels also dramatically improved his previous score, with an 8,4,8, after previous days in the 30’s. 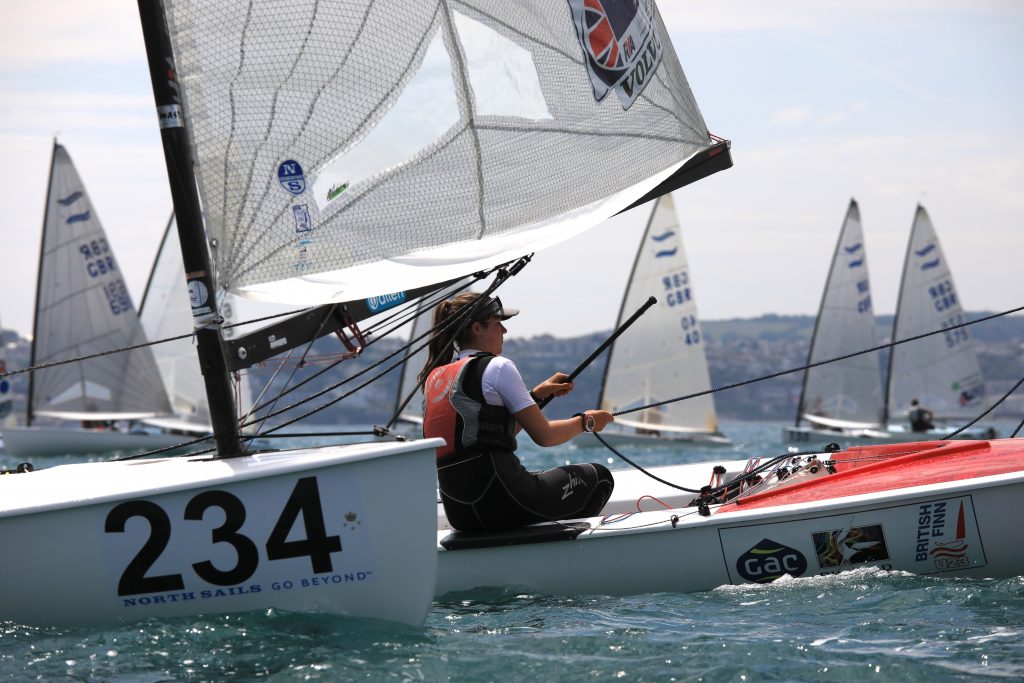 Laser Radial sailor Iona Dixon borrowed her brother’s old boat for the second year to prove that you don’t have to be a heavyweight to sail a Finn, recording a remarkably consistent score line to finish in the top half of the fleet – who says the Finn cannot be a gender equal class!

Supporting sponsors Allen, North Sails and Helly Hansen provided some great prizes allowing everyone that completed all races to go home with a prize. The perpetual silverware for each race is enshrined with an amazing who’s who of British Finn sailing talent – to have you name in the same trophy as Giles Scott, Ben Ainslie, Andrew Simpson, Chris Law, David Howlett, Vernon Stratton and many more is something to savour for the rest of your life. James Skulczuk can now add his own name to the famous Sunday Times Gold Cup and join that elite band, as he and Callum Dixon head to the Silver Cup in Anzio to take on the rest of the world’s top U23 Finn sailors. 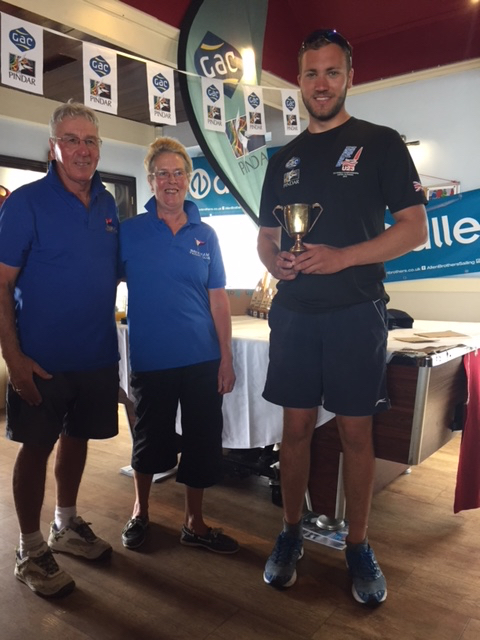 Andrew Pindar commented, “Our logistics team at GAC Pindar is very proud of the support we have given to the BFA U23 squad. Over the last few years, seeing young 17-18 years olds transform from outgrown youth Laser sailors into fully formed international Finn athletes and now a National Champion is fantastic. Since the decision was made to remove the Finn as an Olympic equipment, we’re sticking by the U23 squad as they work out their revised sailing plans; it’s just brilliant to see them performing so well at this National level event when focus and morale has clearly been knocked. On behalf of all our staff at GAC Pindar we wish James, Callum and all who continue to support them, huge congratulations.” 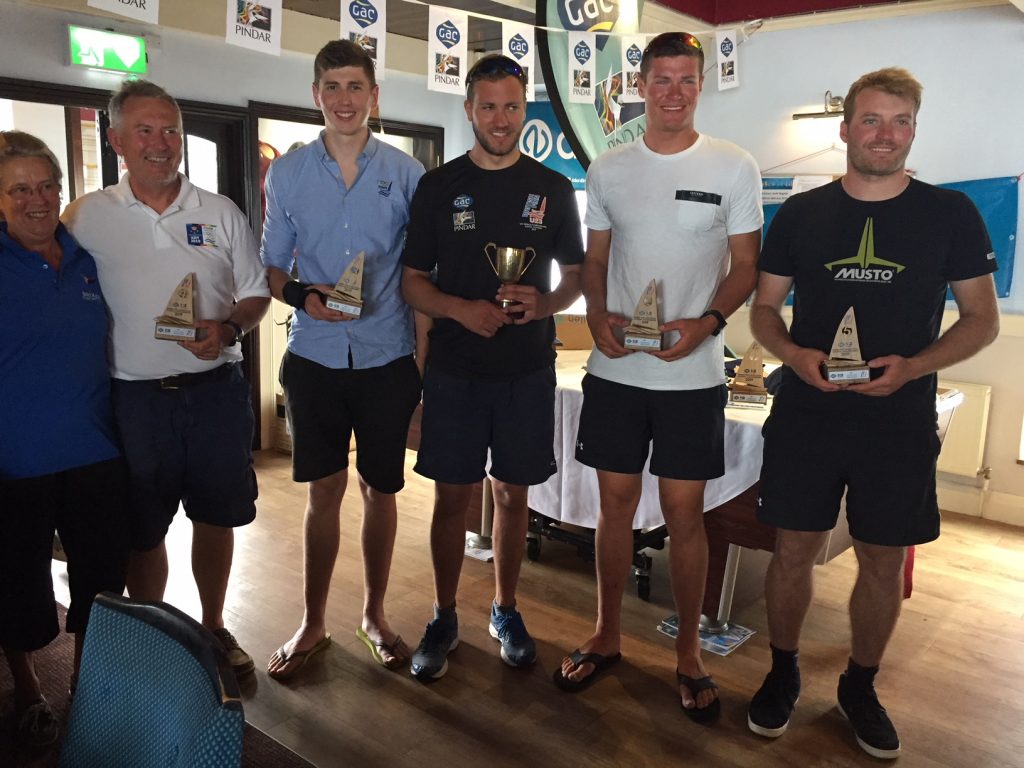