After a fabulous finale to a challenging week, Jonathan Lobert of France won his first ever major title in the Finn class. Ed Wright and Ben Cornish of Great Britain, both survived the Semi-Final to meet Lobert in the Final and secured silver and bronze.

Henry Wetherell made it three medals for Great Britain by winning the U23 European Championship. Arkadiy Kistanov of Russia took U 23 silver and Oskari Muhonen of Finland won the bronze. 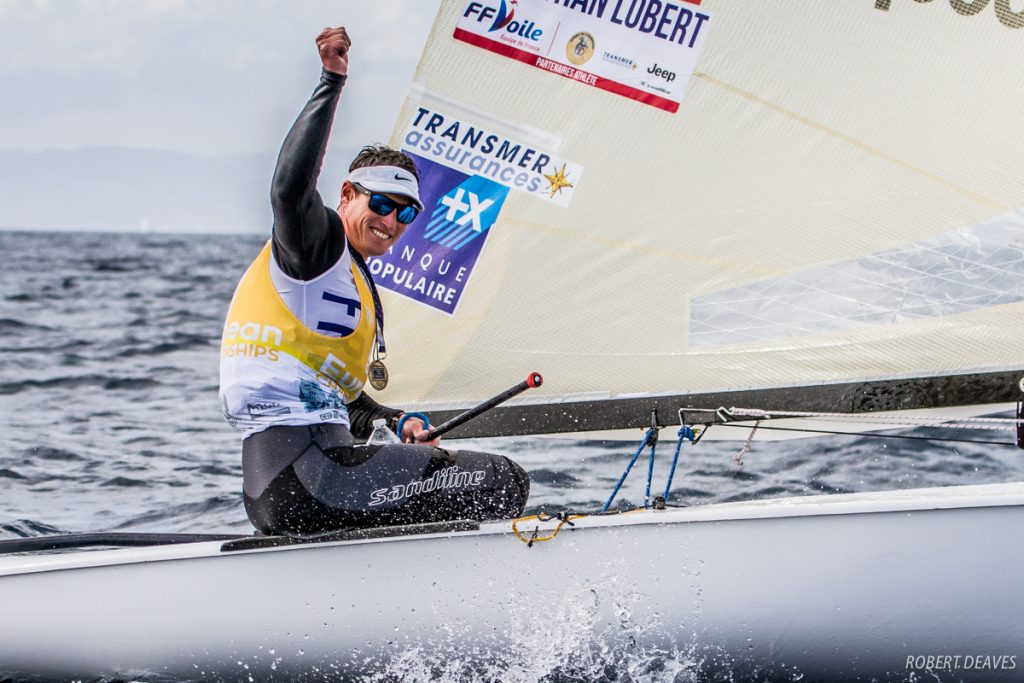 After a short wait for protest time, the Semi-Final was sailed just off the harbour entrance in a reasonably steady 10-15 knots. Wright broke away out of the start and crossed back ahead of the fleet. However the next shift favoured the right again and Wetherell rounded first from Cornish and Heiner. Cornish took the lead on the downwind and was never headed, while Wright looked out of the race. However he recovered on the second beat and then drew level with Wetherell and Milan Vujasinovic of Croatia. It came down to the last few pumps to the finish line with Wright crossing second by less than a boatlength.

So Cornish and Wright proceeded to the Final. The wind dropped off for a while and it started to look doubtful a race could be started, but then the sequence got underway and the breeze returned to 10-12 knots at the top mark. 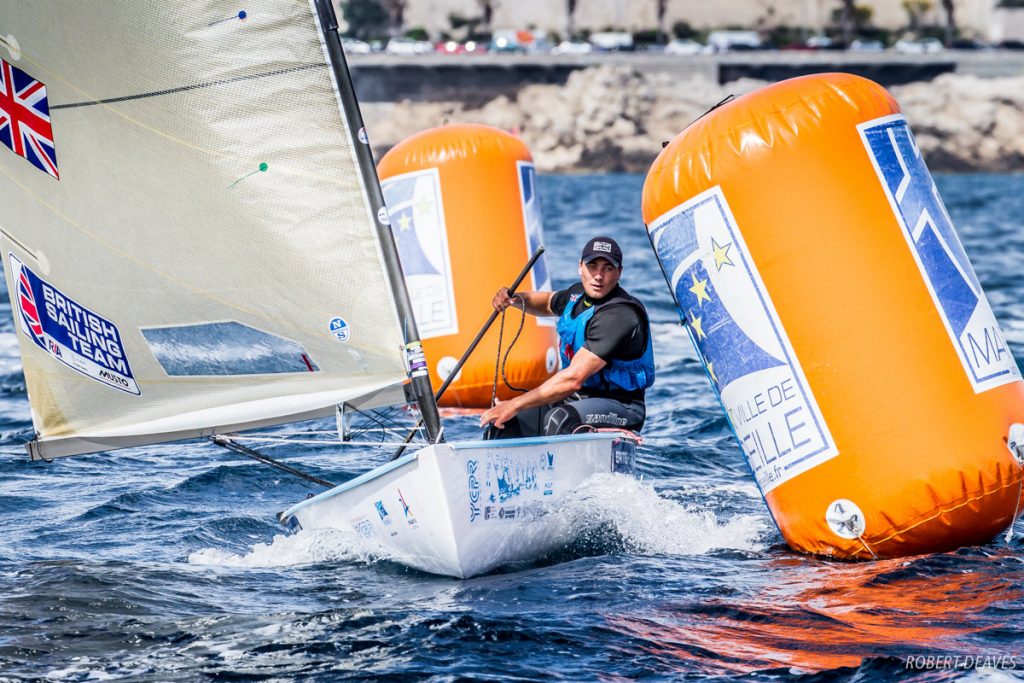 Ben Cornish GBR
Pedersen was forced to tack away out of the start and was never again in contention as a big left-hander came in. The disaster struck Zsombor Berecz of Hungary when his halyard lock broke. He stopped to fix it but trailed at a distance for the rest of the race. Lobert owned the pin end of the line and was clear ahead when he tacked back, extending throughout the race for a big win. Wright was a clear second while Cornish held off Pedersen for third.

It’s interesting to note that the top four sailors all wore the yellow leader’s bib at some point during the week. However, the best sailor on points was Pedersen, and he was beaten by the format and went home empty handed. 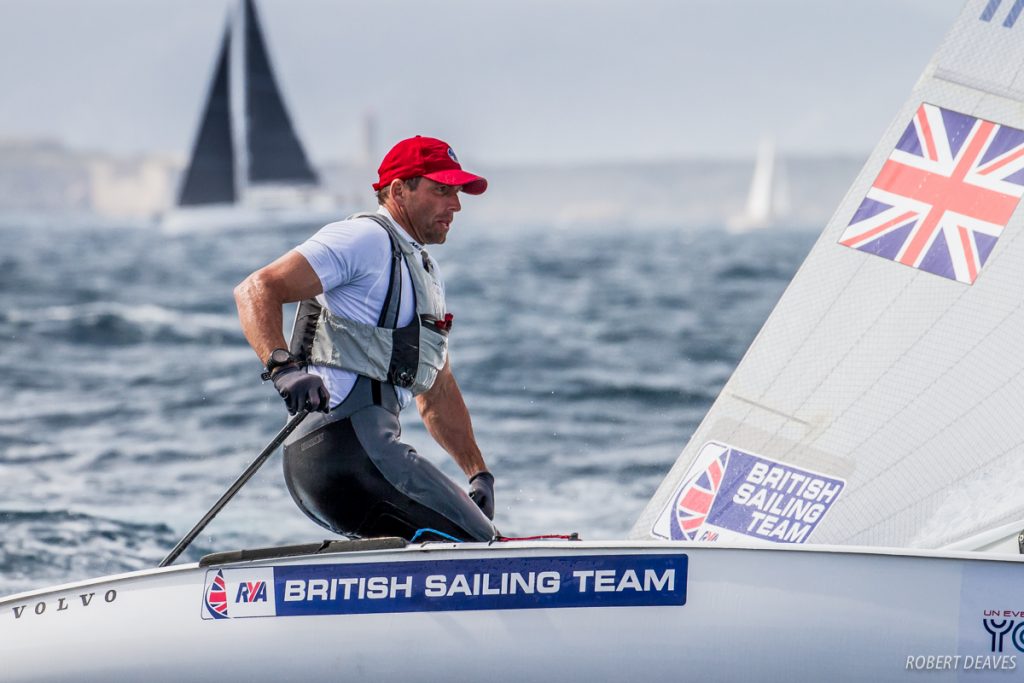 On the fleet race Wright said, “There was a lot of pressure on the first race because I was in a position to be in the top three. I didn’t manage to beat the Hungarian in that race so I had to go into the Semi-Final sail-off.”

“The Semi-Final was just a pump off on the last run. On the last downwind I managed to pass Henry, which got me into the Final. That was a really exciting part of the race actually; he was a little bit ahead of me at the top mark.  I managed to try and cover him a little bit on the run and then to have the starboard advantage. Basically in the last 100-200 yards my winter’s fitness training paid off and I was able to really just push the limits on the line and just pip him. It was quite exciting, and quite exhausting.”

He paid tribute to Pedersen, “He’s had an amazing regatta, he was in the top ten every race, very consistent, sailed very well, and it’s seems such a shame.”

The main conversation point this week has been the running of new format trials tested here this week. It was the second such test, with the first being in Palma earlier this year. It remains controversial and contested. Hopefully, following the survey that will be carried out next week the class will get a clearer insight into the feelings and thoughts of the class as it moves on to future regattas.

Henry Wetherall secured the U23 title with a seventh place finish to also make the top 10. This meant that two of the three Croatians, who had all sailed an excellent week, dropped out of the top 10.

Wetherell said, “It’s really good to win the under 23 European Championships. It’s been an up and down week. I started off well, had a little dip mid-week and then had a good last race today and just managed to squeak into the top ten.”

“It was a really close race with Arkadiy. Up at the top mark it was really close and the bottom of the run we were still close and rounded opposite marks and then I had a better beat.”

On the competition. “It’s really tough. There are a lot of older guys here so it’s a real experience. Everyone knows what they are doing and everyone is quick. It’s good fun because no one ever really takes a race off. Everyone is always on their game.”

Wetherell was joined at the championship by two of the GAC Pindar sponsored BFA U 23 team, Cameron Tweedle and Callum Dixon who put in some strong results in the challenging conditions to further improve their international experience in preparation for the Silver Cup in August, Hungary.