On Saturday 17th April the Finn fleet converged on Bough Beech for the first Finn open meeting of the year permitted to take place, and the final event in the BFA Spring Series of one-day Open meetings. There was a fantastic turn out of around 20 boats and everyone seemed very happy to catch up again after along winter.

The socially distanced outdoor briefing and prize giving worked very well and the sunshine made the outdoor changing almost pleasurable. It was a stunning day with unbroken sunshine, the wind was blowing the N/NE which resulted in some large gusts and shifts rolling down the valley and across the lake – just like a mini Lake Garda at its best! Some of the sailors got caught out and enjoyed a refreshing dip in the lake in the bigger gusts.

PRO Karen Irons and her race team did a brilliant job to get in 4 back to back races under the shifty conditions. A windward-leeward course was set using the full length of the lake. Approaching the windward mark was challenging at times with big gains and losses readily available!

Race 1 was all about the start – Lawrence Crispin (Thorpe Bay/Stone), Martin Hughes (Warsash), Kristian Sjoberg (Thorpe Bay) and Richard Sharp from the host club all got away off the pin end of the line and reached the windward mark with a small gap to the rest of the fleet. Lawrence stayed ahead and, after some mid race changes, the finishing order was Lawrence, Martin, Kristian, Richard and Julian Smith (Mengeham) who had swept through the fleet during this race. 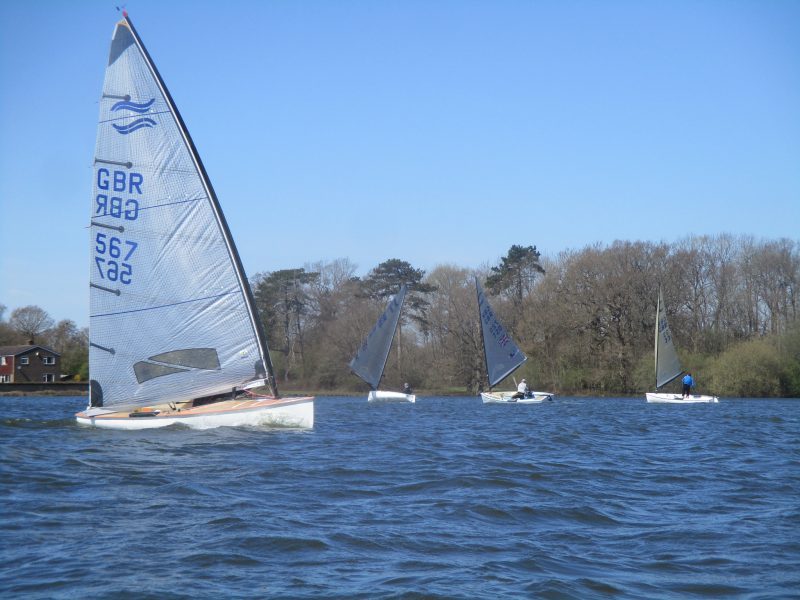 Race 2 quickly followed.  Again the pin end was favoured and an unluckily stalled Roman Khodykin (Mengeham) opened up a welcome gap for Richard to get away on an impressive port tack start. At the windward mark Martin, James Skulczuk (Medway) and Richard led. By the leeward mark Richard had got ahead and in the rounding James and Martin came together. This resulted in James tearing his sail, but amazingly he sailed on to take 4th place. At the finish it was Martin, Richard, Kristian, James and Lawrence, who was rapidly appearing from the pack. 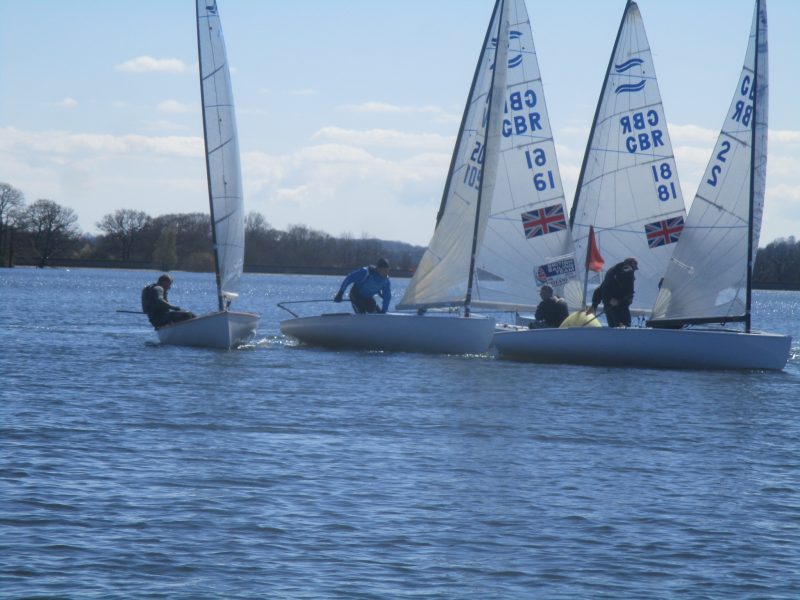 There was a general recall in Race 3 which allowed James to get back out after a quick pit-stop to change sails. Roman pulled off an amazing port tack start to lead from Lawrence. Lawrence got past Roman and sailed away from the fleet. A large gust unluckily put Roman into the lake and back into the pack. As the fleet became more familiar with the shifts and gusts, some new faces appeared at the front of the fleet. The finishing order was Lawrence, Allen Burrell (Thorpe Bay), John Heyes (Mengeham / Warsash), James and Richard.

Again, the pin was favoured for Race 4. Lawrence and Richard sailed up the middle of the lake but were passed by boats from either side. The biggest cheer of the day was for our legend Howard Sellars (Warsash) who rounded the windward mark first. Allen got past Howard and sailed off with a nice gap. The boats behind were all looking for the magic shifts and there was significant place changing. The finishing order was Allen, Richard, James, Kieran Holt (Warsash) and Kristian. Howard held on for a fantastic 6th place. 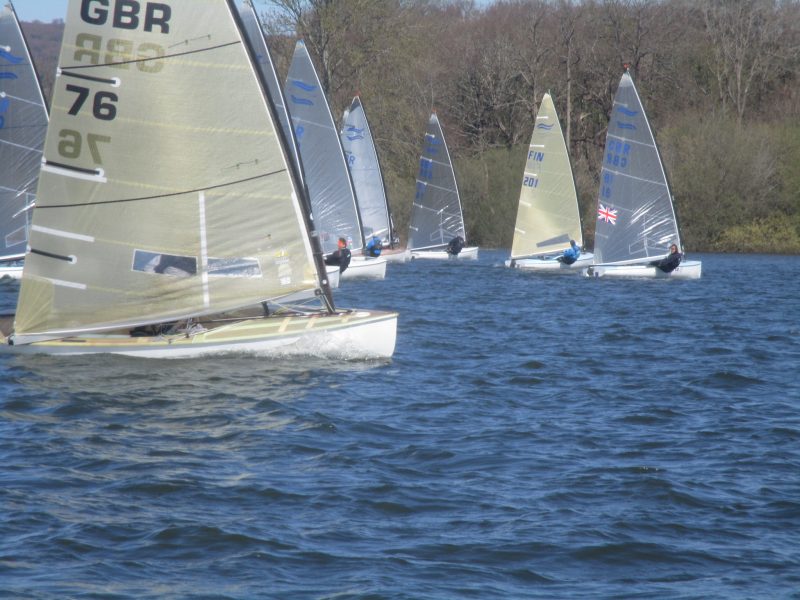 Close racing off the startline, the NE breeze allowing the whole length of the lake to be used as the racetrack.

All in all, it was a fantastic day’s intense racing which greatly helped to blow away the cobwebs and rustiness after the winter – exactly what the early season Spring Series was designed for. Overall results were very tight with 3rd to 5th places all on equal points. Lawrence deservedly won from Richard, Allen, Kristian and James. Lawrence also became the first recipient of the lovely new Finn Spring Series Trophy, the Richard Creagh-Osborne silver box, beautifully mounted on a mahogany plinth by our very own legend craftsman, Howard Sellars.