The 2022 Bough Beech Finn Open was set to go ahead on Saturday 2nd April. This was the 3rd event of the new BFA Spring Series. These events are intended to spread the Finn events around some of the clubs that have smaller home fleets and give sailors a chance to blow away the winter cobwebs.

For the final stage of the serious preparation for this event, two-thirds of the Bough Beech fleet convened on the Friday evening to discuss tactics, strategy and boat set-up. They obviously went out looking for somewhere selling freshly squeezed juices and quinoa and spinach salads. Admirable intentions of course but inevitably heads were rather sore and brows a little sweaty as icy windscreens were scrapped early on Saturday morning. However, by the time sailors arrived at the club the sun was out and a good Northerly wind was blowing down the lake. The event was being held in conjunction with the D Zeros and Supernovas and so, despite the slightly ‘compact’ attendance of Finn visitors, the club was busy and the lake and surrounding countryside looked stunning.

Our Race Office Richard Hudson and his team set an interesting P course and decided on 3,2,1 starts to keep the delays between races to a minimum. The course gave us a decent beat, broach reach, tight reach and a run before heading back upwind. The Race Officer had a very tricky job on his hands because the wind was typically going right in the gusts but just sometimes left also. The breeze was generally from the North and strong enough to plane in the gusts and keep us on our toes all day. The odd swim was noted in the other fleets. The key was to keep in the breeze, hope that you had picked/guessed the right (correct) side upwind and keep away from the other fleets. 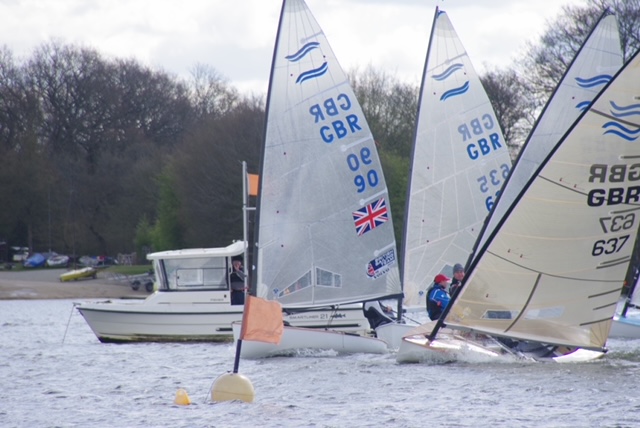 The Finn fleet was pushing the line and Richard Sharp (Bough Beech) was called over at the start. The air turned blue briefly but loudly! John Mackie (Winsford Flash SC) powered up the first beat in his Fantastica and led at the top mark. The 400 plus mile round trip was looking worth it. By the end of the first lap John was well clear of Simon Percival (Christchurch) and Kieron Holt (Warsash).

On the final lap it looked all over – John was out on his own and flying, Simon clear in 2nd and Richard and Kieron were scrapping for 3rd.

However, Bough Beech in a northerly can be fickle and on the run down to the final leeward mark, John sailed into a hole allowing Simon and then also Kieron and Richard to sail back up to him. John protected the left side to be inside at the mark but his breeze shut off. The 4 boats approached the mark in a line and a very fortunate and grateful Richard sneaked through. The finishing order was Richard from Kieron, Simon and the very unlucky John.

Pete Cooke (Bough Beech) and Bill Chalker (Bough Beech) were also having a royal scrap of their own and crossed the line together. Bill got this one by a short nose. After the ups and downs of this race calls were heard from the fleet asking for Valium or other similar products. 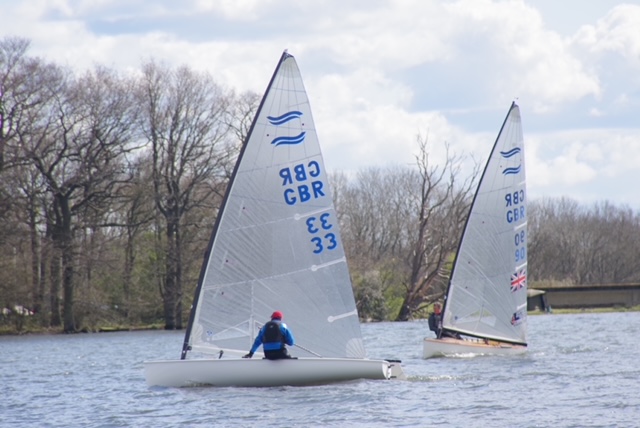 With barely time for a breather (or a Valium) Race 2 began. Simon, clearly expecting a Christchurch style tide to hold him back off the line, was called over at the start this time and returned. Richard closely led Kieron at the top mark and the two had an almighty battle throughout this race, barely more than a boat length apart at any point with the lead changing regularly. Simon had the bit between his teeth and rapidly sailed back through the fleet towards the leaders.

John, Pete and Bill were also enjoying some very close competition and trying to get onto the ladders and avoid the snakes upwind. Kieron got to the last leeward mark just ahead and led towards the finish. Richard tacked off looking for a rare left shift (which didn’t arrive) and Simon went right into a nice shift, pipping Richard on the line. Finishing order was Kieron, Simon, Richard. 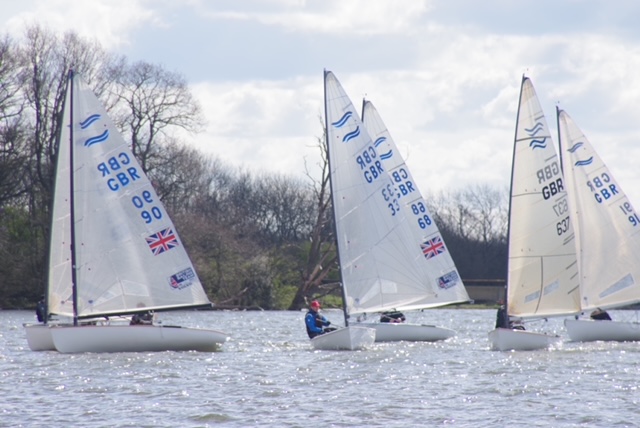 So – all to play for in the final race with 3 possible winners still. Amazingly nobody was over the line this time and the fleet tacked their way through some tasty shifts towards the first mark. Everyone looked good at some stage on this leg but John was again first at the top mark from Kieron and Richard with Simon, Pete and Bill all very close.

On the first broad reach, Richard and Kieron got inside John and sailed away in a private gust on the next leg to establish a nice gap between themselves and the rest of the fleet. Richard led throughout but the two boats were still very close at the final windward mark. Kieron ducked low on the top reach but the wind filled in from above, allowing Richard to open up some distance for the first time. Simon had pulled away from the other boars and held a comfortable 3rd place. The finishing order was Richard, Kieron, Simon.

So, after a fantastic day’s racing, the final order was Richard (2 points), Kieron (3 points) and Simon (5 points). After a slight delay to the prize giving due to a protest in the far more aggressive and punchy D Zero Fleet, prizes were awarded and happy sailors left after a great day on the water. 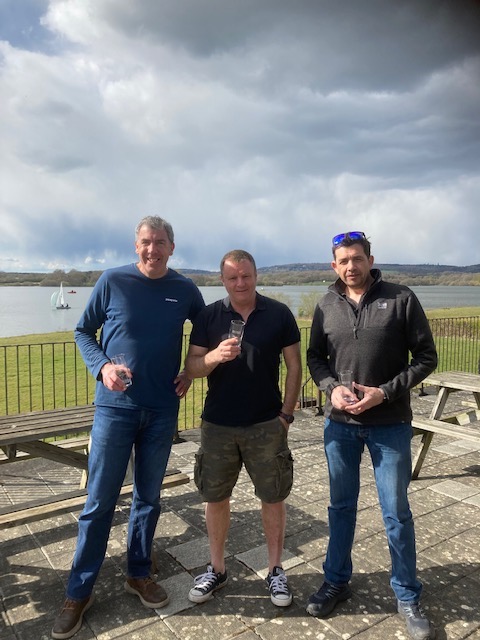