A three-day celebration of seventy years of sailing Finns at Bosham took place over the 15th-17th July. It was also an opportunity to mark seventy years since the Finn first sailed in the Olympics in Helsinki. Bosham SC has a fleet of eleven boats and is hoping to have more soon. Some have called Bosham SC the ancestral home of UK Finn sailing as the fleet started there soon after the design was finalised in 1949.

Twenty-six boats had entered but COVID took its toll and 23 actually competed over two days with three races per day. The event had a retro feel, not only because it was the 70th anniversary for the Finn fleet as an international class, but also within the fleet there were three wooden-hulled 1950’s and 60’s classics, sailing with wooden and aluminium masts and Dacron sails. Moreover, adding spice to the sailing, the courses set were around Chichester harbour using the local racing marks, several of which date from this early period in dinghy racing. 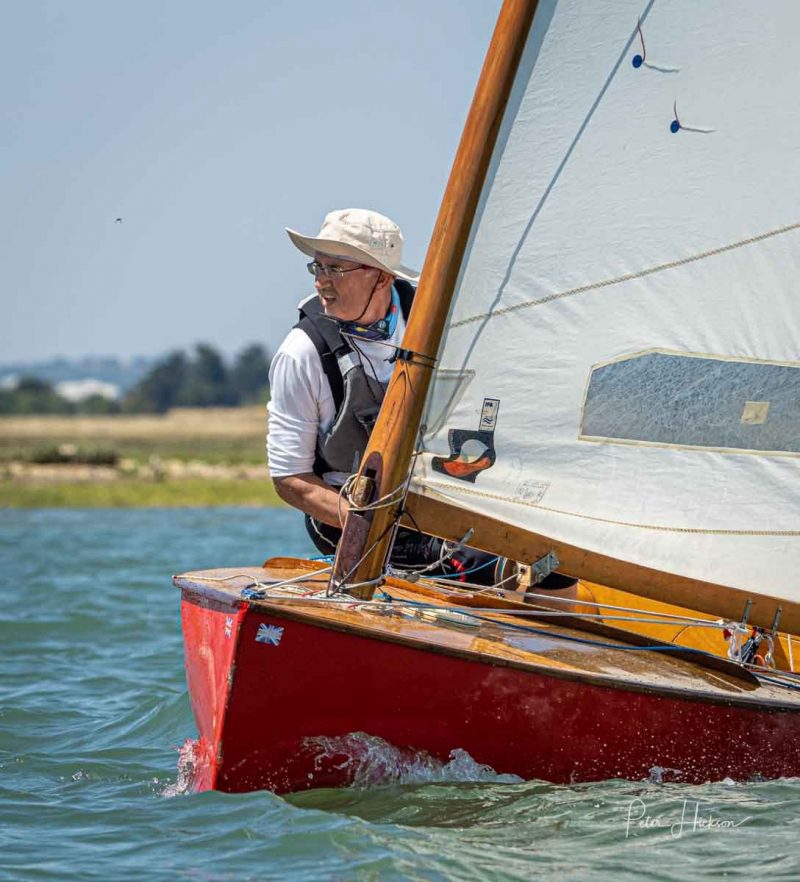 The sun blazed away as the days were to herald some historically high temperatures and unforgettable sailing in Chichester harbour. The weather patterns over the three days were virtually ideal with a sea breeze building each day from about 11.00.

Friday was an opportunity for visiting helms to familiarise themselves with the Chichester harbour waters.  Cameron Tweedle ran the day’s training providing his expert guidance as the current UK national champion. Starting with very little wind, as the day progressed, the wind built to a spectacular 15kts, about the limit for effective training communications. All participants improved their sailing skills under Cameron’s excellent supervision. Topics covered included rig set-up for a variety of conditions, faster tacking and advice on making the boat go faster.

Following a detailed briefing by the race officer Nick Fox, with stern warnings to get to the start area on time, the races on Saturday saw slightly less breeze than Friday’s training day, but still sufficient to propel the fleet to several corners of the harbour. Sunday saw the return of the stronger breeze, but this time from a more awkward easterly direction. 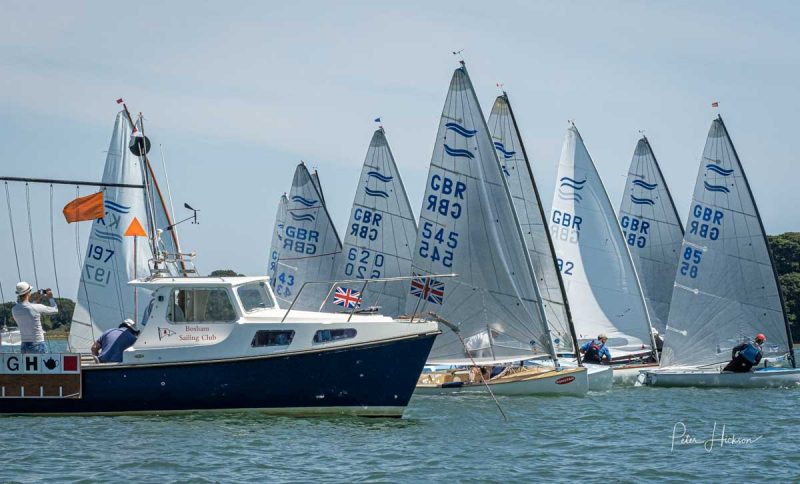 The competition was tight as a different winner emerged at the end of each of the three races, with some evidence that the previous day’s training had made a significant difference to some people sailing. Andrew Wylam, Dave Walker and Mathew Walker each scored bullets. Results were largely determined by the first beat, choosing the Itchenor shore paid off in races 1 & 2, but Dan Belton did well to come back from a choice of the Pilsey Island shore in the first race. 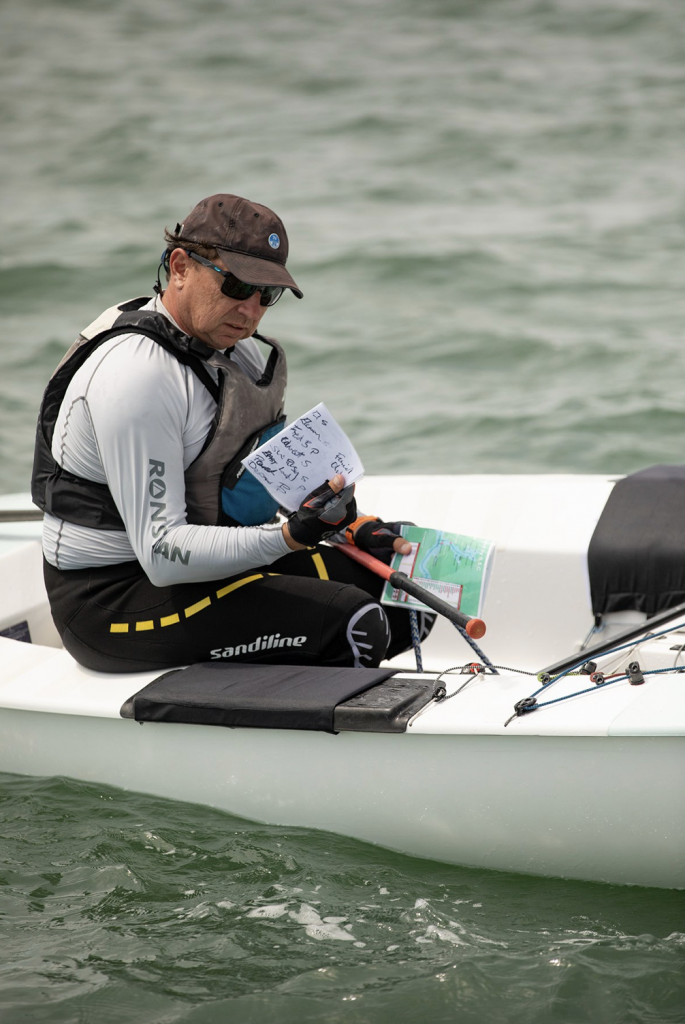 Visiting competitors were often challenged by the intricacies of the harbour mark courses….!

Race 3 was across the Winner Bank with a finish a long way downwind to Bosham Quay and the club line. It was noticeable that the lighter helms and those with local knowledge benefited from this format and Mathew Walker came through to win. Contrary to popular belief the old wooden boats demonstrated they are still competitive. Martin Hughes sailing a late 1950’s Jeremy Rogers built Finn and a 1980’s Musto Dacron sail, showed the fleet the way on several occasions during the day, placed in the top five all three races to complete the day in overall third place. 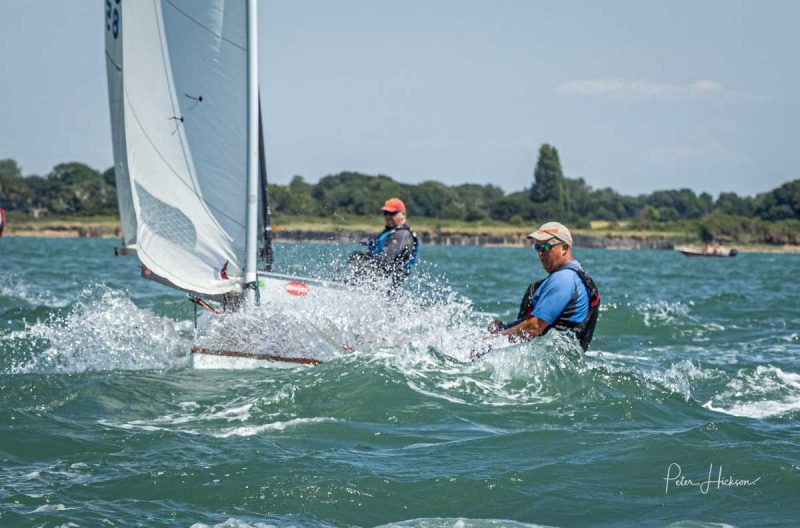 On Saturday night Bosham Sailing Club, hosted a magnificent Finn feast to commemorate the 70th anniversary. The meal was well attended by Finn sailors past and present with many Finn memories remembered and discussed.  The event also sought to raise money for the Andrew Simpson Water Sports Foundation, to which purpose, Guest of Honour at the Dinner on Saturday evening was ex Olympian and multi-medal winning coach David ‘Sid’ Howlett.

Day Two dawned with more gradient wind which built with an augmenting sea breeze but stayed in the east. Easterlies in Chichester channel provided the Race Officer, Nick Fox with a significant headache to lay a windward leg and a fair start line sailing across the channel. This meant that the first beat was very short and crossing the strong spring tide made for some hectic activity on the start line and at the windward mark. Boat speeds were high with several downwind and reaching legs and boats covered the ground in quick time making for quite a short Race 4, won by Mathew Walker. 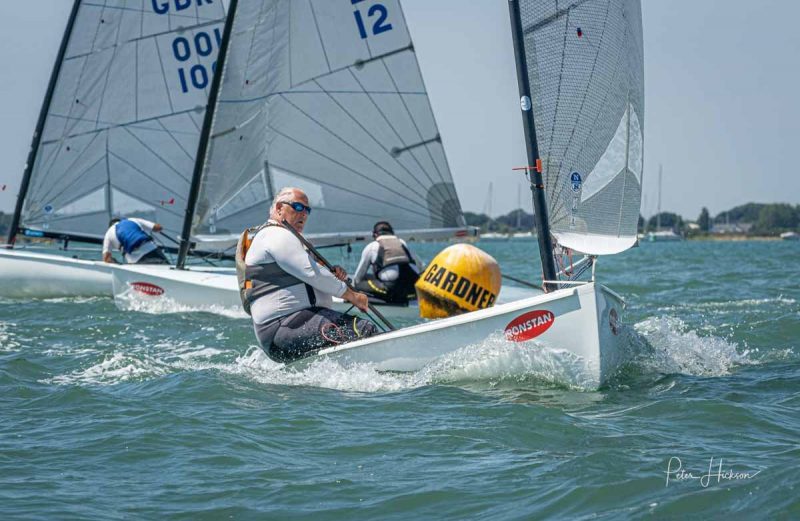 The next race was longer, taking the sailors out into the harbour entrance, but as the wind built so the speeds went up with Roman Khodykin coming home first in 46 minutes. Determined to get at least one big race in before the end, the Race Officer sent the fleet across the harbour entrance and the Winner Bank before a big blast downwind to finish at the Quay Line. Mathew Walker built a two-minute lead by the end, coming home in 1 hour 16 minutes. 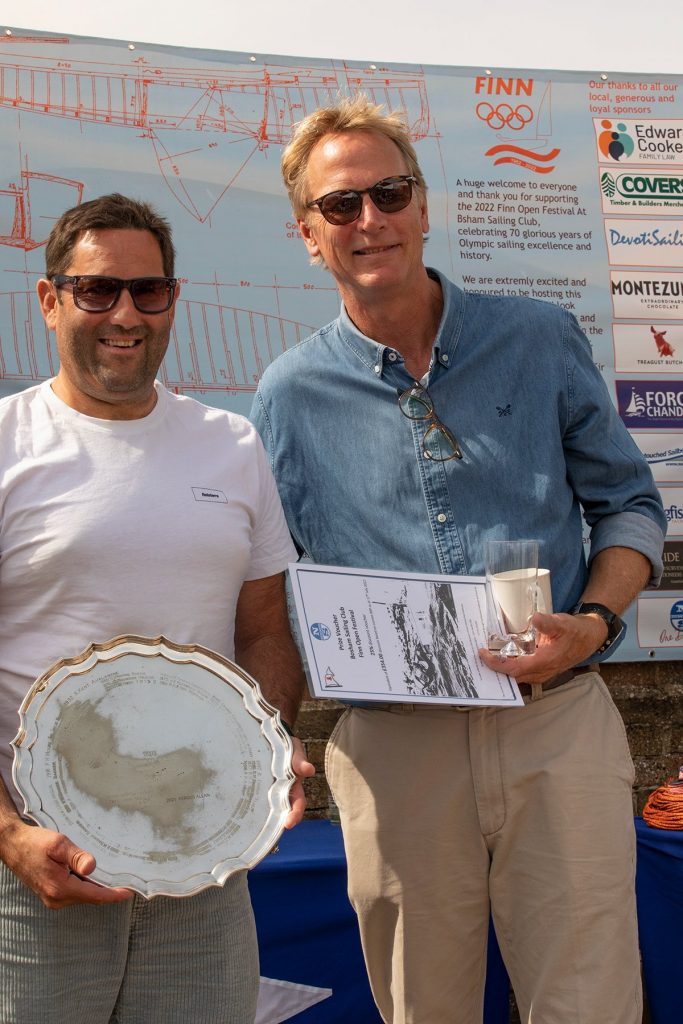 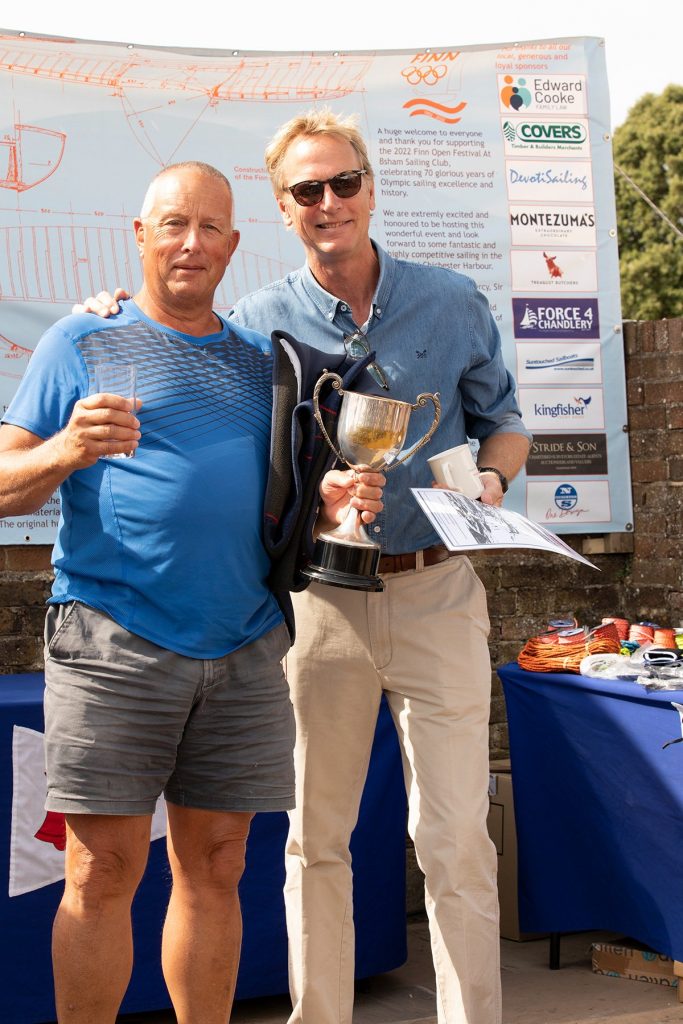 The impressive event was organised by Bosham Finn Class Captain Dick Pratt and Jeremy Drummond, aided by Vivian Morgan who drummed up a huge following on social media – well done to all the team! 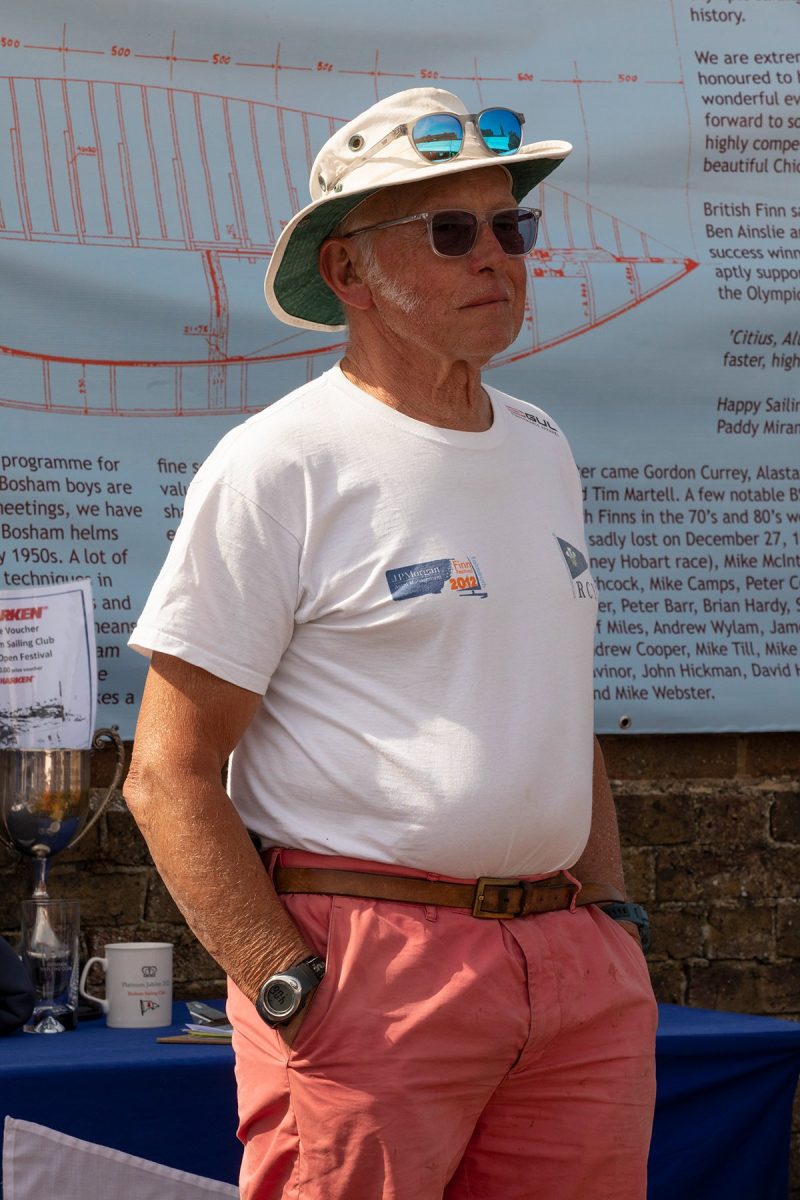 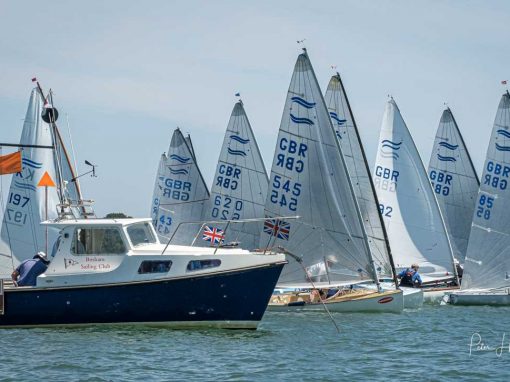