Giles Scott (GBR) continues to dominate the Finn Gold Cup in Takapuna, New Zealand. In spite of only winning one race so far this week he has amassed an impressive 52 point lead after eight races with just three to sail to decide the 2015 Finn world championship. Three races were sailed Friday with three different winners: Max Salminen (SWE), who moves up to third behind Scott and Vasilij Zbogar (SLO), Pieter-Jan Postma (NED) and Ioannis Mitakis (GRE). The British team still dominates the standings with 3 in the first 10 – the only nation with more than one sailor in medal race contention, showing the great depth of the GBR squad. 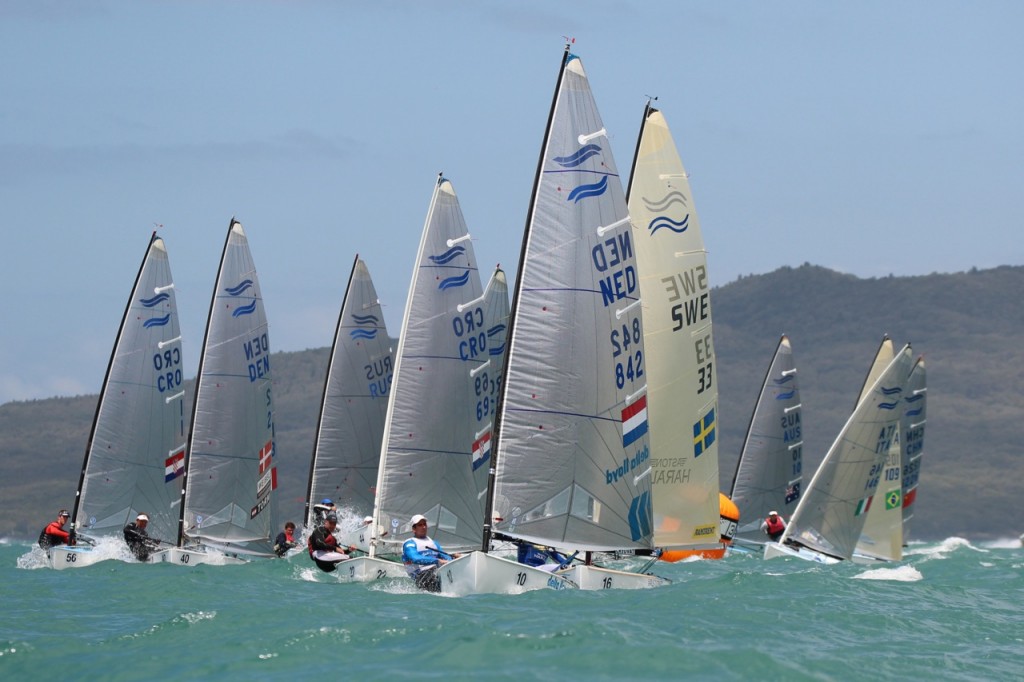 It was a tough day in Takapuna, but after a few days of light winds the sailors were able to stretch their legs and sail the boats as hard as they liked. The generally clear blue skies and strengthening wind played to the assets of the Finn and the Finn sailors and though the 75 sailors came ashore exhausted, they also have ashore satisfied after a great day’s racing. 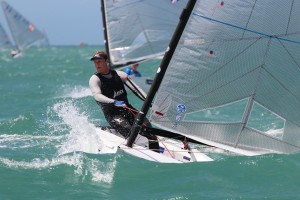 With the black flag up, race 6 got away after several attempts, with two boats pulled out. Ioannis Mitakis (GRE) led at the top mark from Arkadiy Kistanov (RUS) and Jonathan Lobert (FRA) but Salminen had taken the lead and by the gate extended away to win from Josh Junior (NZL) and Anders Pedersen (NOR). Scott had moved up to second at the gate but lost out on the second beat to drop to fourth. There were numerous changes on the second beat with boats moving from the 40s to the top five and vice versa. The Oscar flag for free pumping went up at the first top mark and stayed up all day as the wind built through the day to reach 14-16 knots by the end of racing.

Race 7 was started very quickly in a slightly increased wind, but still onshore with a very tricky chop to steer through. Pieter-Jan Postma finally put together a good first beat to dominate and lead round the top mark from the right. He extended downwind to build a big lead at the gate. Alejandro Foglia (URU) rounded fourth and moved up to second by the gate, a position he maintained all the way to the finish. Jonas Høgh-Christensen (DEN) crossed in third after rounding the top mark in fifth. Scott had rounded the top mark in the 40s, but managed to recover to 15th by the finish. 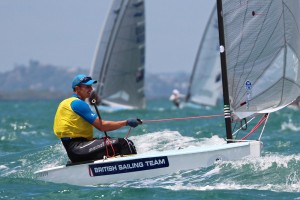 More cloud arrived for the third race of the day with the wind now at 12-15 knots. It was perfect conditions for Finn sailing with nice waves and great sailing, and this suited Mitakis perfectly as he led round the top mark again. This time he kept hold of the lead to win the race while Scott moved through the fleet to cross in second, while Lobert ended a good day with a third. One of the four black flag casualties of the race was Ivan Kljakovic Gaspic (CRO), who adds a second letter score to his card and effectively ends his medal race hopes.

Lobert ended the day in fourth overall, his highest so far this week. “Today was a big day with many ups and downs for me.” After rounding second and making some mistakes and a broken vang in the first race he ended up 14th. “So I was really mad. I fixed my vang and said I needed to get back on track. I played the right side which was not good side again so rounded 40th, but I made a nice comeback to 18th. In the last race I had a really good start at the pin and managed to finished third. So in the end not a super day as Max, but I am still on top of the fleet which is good for the next days.”

“I am not too bad in the results but I was expected a little bit better. I had many races when I was losing points stupidly, but the racing conditions are not easy. You never know what will happen. You just have to take what you have and try to do your best with it. Sometimes it’s working and sometime it’s not working.”

Salminen is now in one place ahead of Lobert in third overall. “It was a physically really tough day with a medium wind and really choppy waves, and free pumping downwind all races, and three of them. So it was really tough but I am super happy. I got away with the lowest scorecard of the day so I won the day in that sense and took a big leap up the scoreboard as well. So I couldn’t ask for more. I feel great in these conditions, in the current and this strength of wind.”

After a terrible Thursday, Postma has found some form and moved up to 12th overall and currently third nation that has not already qualified for Rio, “Three races in great conditions. Was 10-12 knots, free pumping, perfect Finn conditions. And it went my way so that was nice. First race I had to come back from around 42nd and I finished 13th. The second race from start to finish was a great first, and the last race a sixth. Amazing battles today.“

Zbogar is surprised to be in second place overall after a a day averaging tenth. “I am surprised because my results are not even close to second. My best is sixth. It means that he regatta is really tough and you have a lot of good sailors, about 20-30, can win every races, especially in these conditions. Everyone has a chance to be in front.” 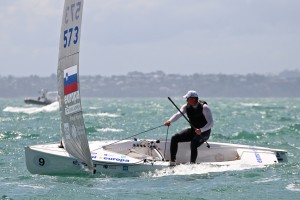 “Today was nice conditions, quite stable wind, with three race and pretty tough. Extremely good racing conditions but physically exhausting because three races in a Finn is really, really hard. I managed to make three comfortable races all around tenth place and I thought this was important because many sailors were going up and down over the last days so consistency was my goal today.”

“The wind is pretty tricky but like always, it is the same for everyone. For me I am happy, already a Master so to be in front of the ranking is extremely good. Of course I give everything every day and not looking too much at he results, just try to sail well and make as few mistakes as possible.”

As well as the top 10 landscape changing dramatically, so has the list of four nations occupying the important space to qualify for Rio. Currently Greece, Estonia, Netherlands and Uruguay are the four nations, but Russia, Italy and Czech Republic are all within striking distance, as the finish line looms ever larger.

If yesterday was moving day, today was all-change day. All-change except the top of the leaderboard of course, as Scott looks to be inexorably headed towards his third world title. But as we get towards the narrow end of the championship, the points behind him have closed up. With just 25 points separating the next 11 boats, there is still along way to go in this very high scoring championship.

The fleet series concludes on Saturday with two more races scheduled from 12.00 By the end of the day some of the four nations from this event to qualify for a place in Rio may have already been decided, ahead of Sunday’s final race and medal race.

Results after eight races (one drop)