The Finn Northern Championships at Yorkshire Dales Sailing Club on the 13th/14th April marked the start to the 2019 Travellers Trophy series. 17 Finn sailors ventured from all corners of the country to compete at what was tipped to be one of the most competitive events of the season and the entries did not disappoint! The first entries of the morning came from the 4 strong Warsash SC contingent, followed by even more Southern entries. However, the Northerners weren’t going to let their prized possession slip through their fingers that easily with late entries coming from Finn Nationals Bronze Medallist & Masters Champion Graham Tinsley, previous Masters World Champion John Greenwood, multiple time Phantom National Champion Andy Couch and local Yorkshire Dales veteran, Tim Simpson. The sailors were greeted by a chilly (northern speak for 5 degrees!) easterly wind of 15 knots and straight away it was clear that those who came ill-prepared without adequate clothing were going to suffer. The weekend brought a novel format with 5 short races scheduled on the Saturday with a further 2 on the Sunday that included a double point non-discardable race for all participants. 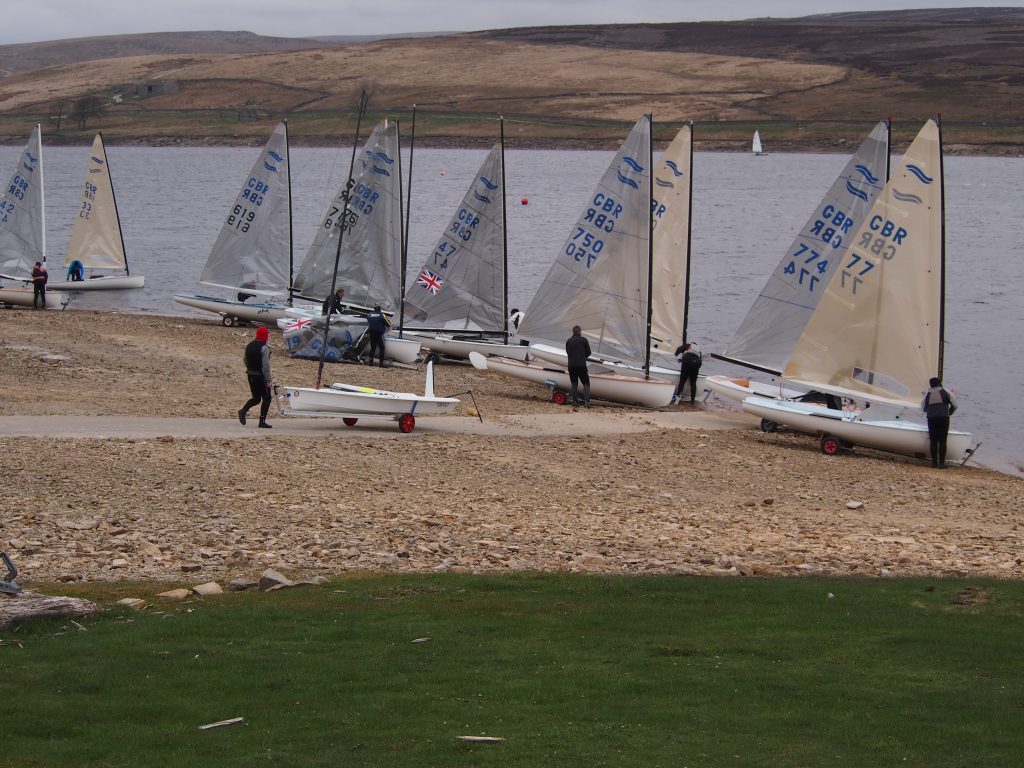 After several bacon butties, all sailors were eager to get going and arrived at the start early to carry out their pre start checks. It was Ivan Burden who got off to the best start in race 1, schooling the fleet by taking advantage of the pin end bias to cross the fleet on the first shift and lead around the windward mark. With 2 races scheduled before lunch and cold conditions the decision was made to shorten the race after 1 short but testing first lap. Andy Couch, after arriving fashionably late, managed to sneak past to take the bullet from Ivan, second and Keiron Holt third. Race 2 got underway, and this time it was Martin ‘Bionic’ Hughes who led around the windward mark after demonstrating a masterclass on linking up the pressure and shifts upwind. However, it was to no avail as Martin was singled out as being OCS. Greenwood took the bullet from Couch with Tinsley finishing third. 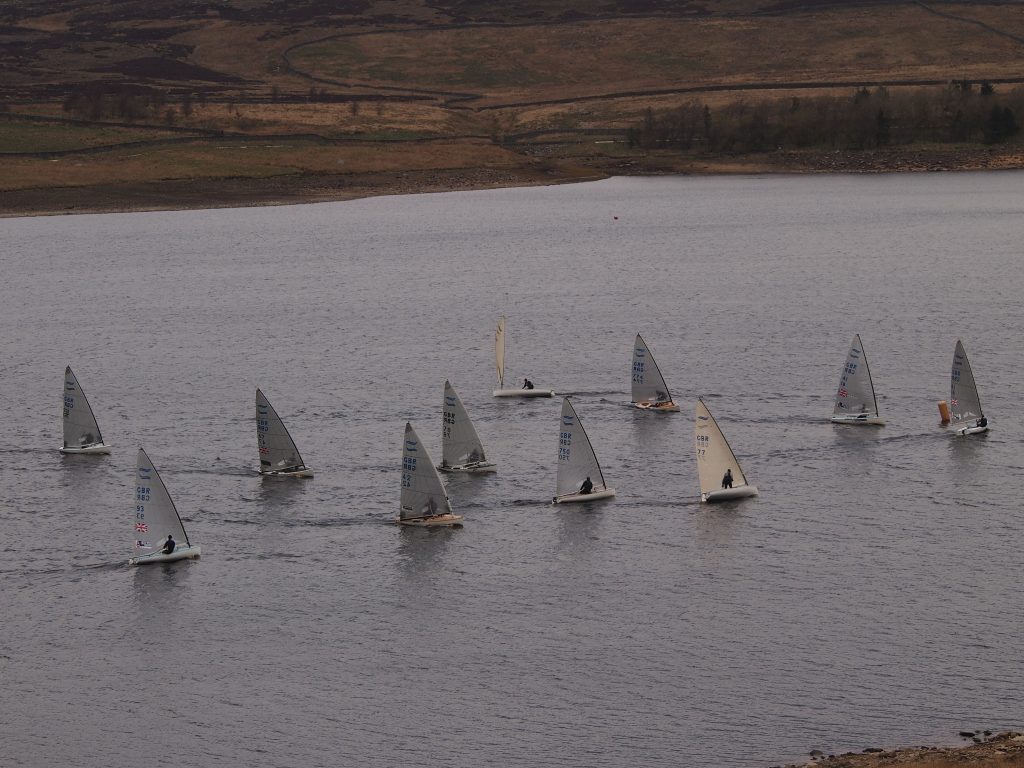 After the second race it was time to head ashore to warm up, discuss the racing and enjoy the generous complementary lunch provided by the galley – true northern style! After an hour on shore, the usual poor performance excuses being given, the boats went back out on the water for a following 3 races. It was the decision to sail in the afternoon that really separated the men from the boys with John Heyes saving Warsash’s reputation having been left by his fellow compatriots to fight for the trophy alone. The clubhouse’s panoramic view of the race course, and comfortable leather sofas meant they could still watch every moment of the racing of the more hardy competitors. It was the 3 Titans of the North who initially took charge of the 3rd race with John Greenwood leading from Crouch and Simpson. Tinsley retired after having tiller problems. 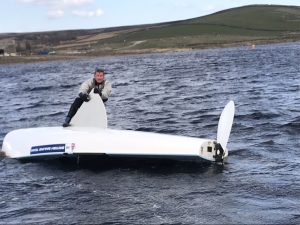 John Heyes fought back in the 4th race with an impeccable start and playing the shifts to nail this race. Tinsley had a coaching session in capsize recovery and cryotherapy, picking up his second DNF and ruling him out of contention. After a short postponement, Race 5 turned out to be a war of attrition with energy levels running low throughout the fleet. Crouch benefitted from a good lift off the start and hooked inside the fleet to grab a lead and maintained that to the finish. Greenwood, for once got the shifts wrong and languished in 5th. Tinsley, meanwhile fresh from his cryotherapy had his best result and finished 2nd. 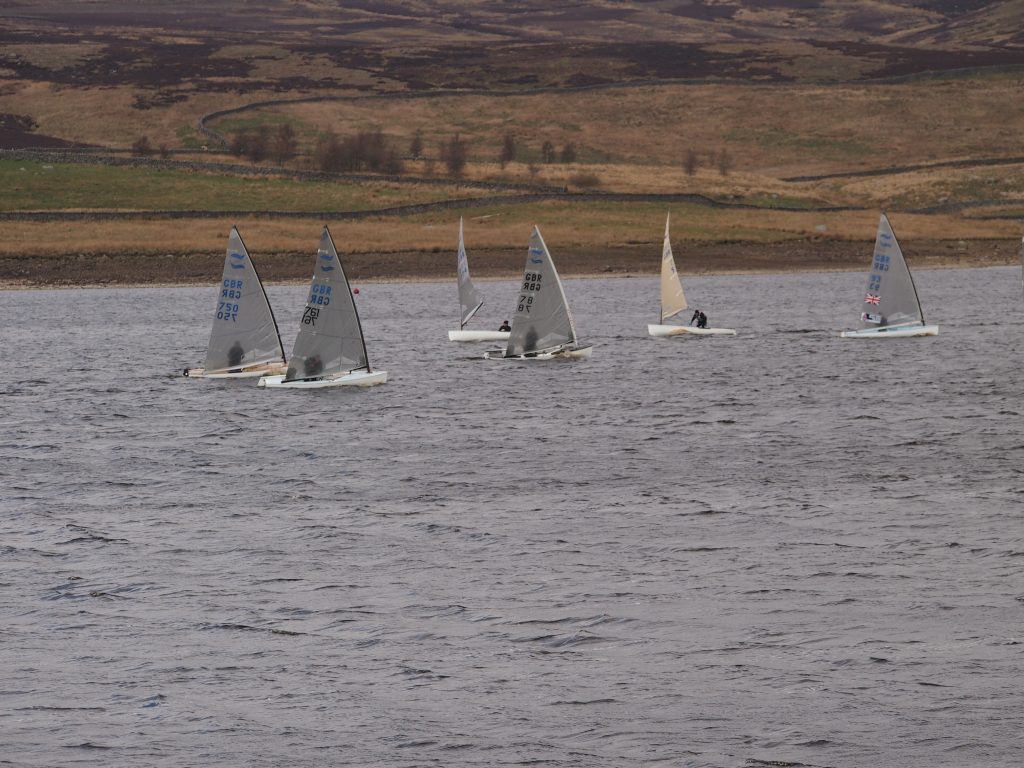 Greenwood got off to a good start on Sunday, port tacking the fleet to lead by 5 boat lengths. Crouch, Heyes and Tinsley were left to battle it out for 2nd with Heyes mastering the shifts up the 2nd beat, pulling up to Greenwood. However, all his great shift picking up the beat was wasted when he capsized on a gybe on the last run dropping to 9th! (why did there have to be a third lap!? Ed) Greenwood taking the win and closing to within a point of Crouch. With one race to go and a double points counter Greenwood knew he had to just beat Crouch on the water and the Northern title was his. All looked good up the first beat with Greenwood leading Crouch around the first mark. Greenwood then placed a cover over Crouch for much of the race. At the final gate Crouch chose to split, rounding the non-favoured buoy and heading out on starboard tack.  Greenwood immediately tacked to cover and raced Crouch to the finish.  The dual on the last beat allowed Tinsley to slip past Crouch and almost snatch victory with all three boats finishing within boat lengths of one another.

Greenwoods victory clinched the Northern Title by 3 points, with Andy Crouch finishing a valiant 2nd and consistent Ivan Burden in third. Hector Simpson had scheduled in a pumping clinic for the afternoon, but with the extreme weather, long journeys and tired sailors a unanimous decision was made to opt for the classroom instead. 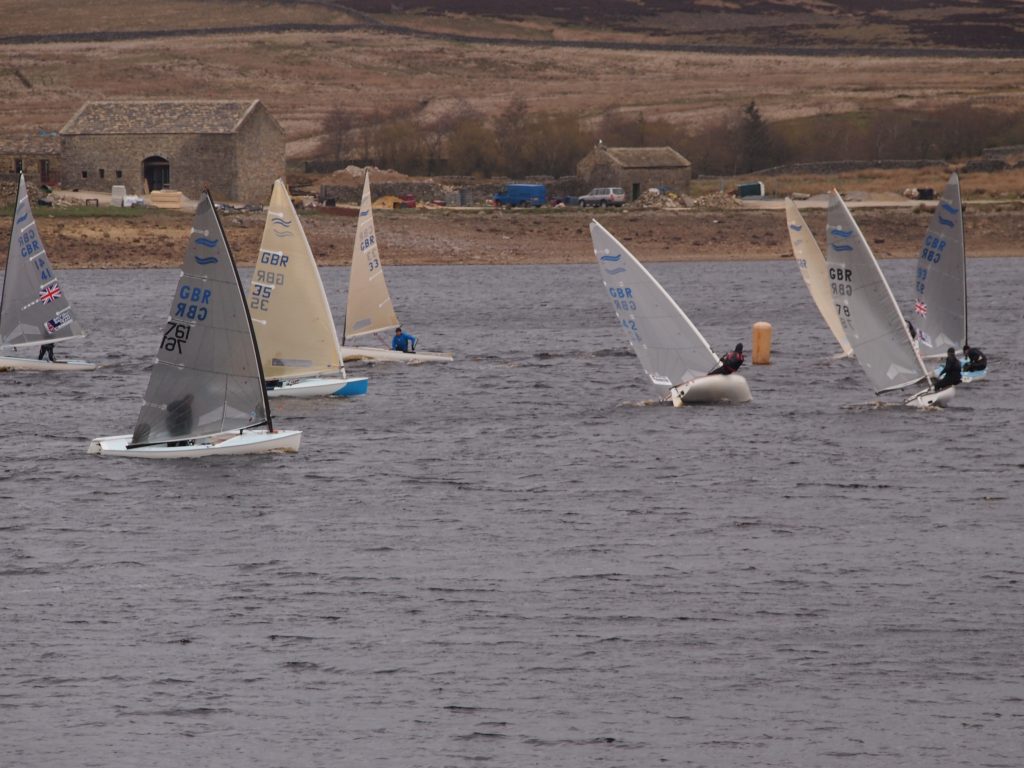 Everyone enjoyed the state of the art facilities of YDSC, tight racing and the ability to come in for lunch, refuel and discuss the mornings racing. It is hoped there will be another Travellers event here next year with entries expected to increase following the great reception the sailors enjoyed. John Greenwood and the BFA Chairman thanked Hector and the race officials for their generous hospitality, great organisation, scenic location and warm northern reception – don’t miss a trip to the Yorkshire Dales next year!