Warsash Sailing Club hosted the 2017 British Finn Association Masters and final Open meeting of the year. This popular end of season event was supported by 29 sailors, most of who were at least Masters, with a spattering of Grand Masters, Great Grand Masters plus one Legend. But true to form the Under 23 squad turned out in force to fight for the Open title and provided excitement and the occasional lesson for the old hands. The event also saw the culmination of the BFA Travellers Trophy with the title race hinging on the results of the Warsash event.

The weather forecast for the week before the event suggested a startlingly warm weekend with gentle south or south westerly breezes. That is exactly what the sailors got. Shorts and tea-shirts reminiscent of an event in June or July were the order of the day for many sailors as they listened to the event briefing led by principal race officer (PRO) Nigel Russell. The usual questions were asked ‘do we have to go through the start/finish line every time upwind’, and the usual responses were given ‘just read the sailing instructions’.

Although the breeze was light the ebb tide carried sailors to the start area and the first race was started dead on time. Unusually for the pushy Finn fleet the race got away first time without a recall. The tidal conditions favoured the left side of the beat, but the pressure came in form the right and those who tacked onto port early at the committee boat end of the line. These sailors led the race with U23 sailor James Skulczuk taking the first win from fellow U23 Hector Simpson and Grand Master Allen Burrell staking a claim for third in his bid to retain the BFA Masters title and Grand Master John Heyes fourth. Under 23 sailor Jack Arnell proved how important it is to remember the sailing instructions once you have read them as he led around the final mark he missed the finish line completely as he set off to the windward mark. Instead of winning the race by 100 mtrs he finished, rather red faced, in sixth.

PRO Nigel Russell wasted no time between races, the courses were re-laid swiftly and within a couple of minutes of the last boat finishing the first race the start sequence for race two commenced. This time the unruly fleet returned to their normal punchy selves and forced a second start, but the sight of code flag Uniform, put some into a flat spin as shouts of ‘what does that mean’ were heard, ‘it’s rule 30.3’ was the response, leaving the original questioner no better off. The threat of a DSQ scared the fleet into a clean start although the bunching at the committee boat end caused some conversations to say the least. Those who tacked off early onto port again picked up the stronger breeze but this time Christchurch Master Alex Atkins led the fleet around the windward mark, but was soon overhauled by Hector Simpson and Jack Arnell who went on to take line honours this time.

The final race of the day started in similar 5-7 knots of gentle breeze, but those who started at the committee boat end and tacked onto port quickly soon lost out as the pressure increased form the south favouring the left side of the course. The Masters sailors looked to be taking control of the race in the initial stages of the 2 lap race, but soon the extra pace off wind of the U23 Cameron Tweedle and Hector Simpson saw them take first and second place with Keyhaven Master Cy Grisley taking a well-deserved third with increasingly confident Alex Atkins close on his transom in fourth. 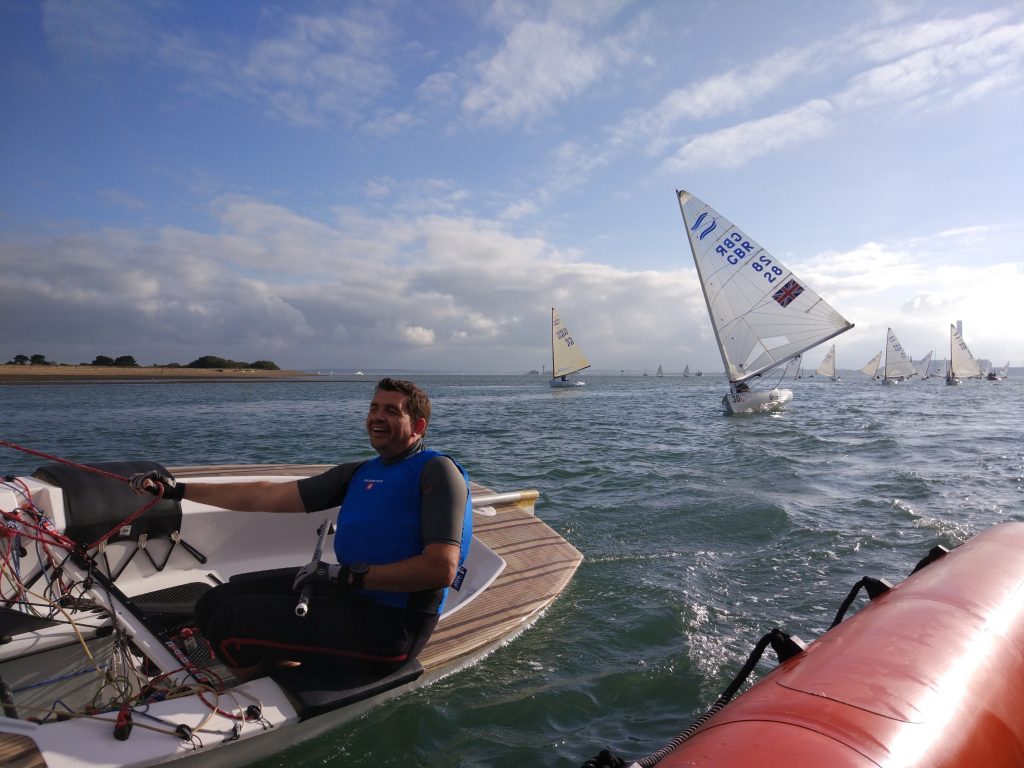 Kieron Holt enjoys the run home on day 1 of the Masters at Warsash
Once ashore, sailors gorged themselves on tea and cake before the end of season dinner in Warsash Sailing Club washed down with a beer or two. In some cases it was enough beer to upset their sailing rhythms for Sunday morning….

Sunday dawned with similar conditions as Saturday but the threat of increased winds as the day progressed. Dinghy park activity included sail and rig changes to cope with the forecasted increase in wind. Once afloat the short gentle sail to the start area with a light and patchy south westerly gave an insight into the day’s conditions.

PRO Nigel Russell again got the fleet away first time, those in the centre and left of the course made the most of the pressure increase first and were able to dominate the race. On the second run the wind increased to around 11 knots and favoured those on the left side of the run with Hector Simpson taking the race win with Callum Dixon second and Allen Burrell third.

Race five was a master class in light wind sailing by the U23s who led the way all around the course taking the top four places allowing John Heyes to take fifth place and Alex Atkins to show his consistency with his third sixth place of the championships.

The final race started with the best of intentions but as the wind dropped and backed to the south those who started at the pin end of the line came out as favourites at the windward mark. As the boats at the front end of the fleet rounded the spreader mark the wind drifted away to zephyrs, leaving some floundering. The race officer shortened the race at the leeward mark ensuring everyone finished, but inevitably this was just as the wind began to fill in. Again this was a race win for Cameron Tweedle closely followed by Hector Simpson and Jack Arnell.

Alex Atkins showed consistency and tenacity to take the 2017 BFA Masters title finishing after countback on the results of the last race just ahead of the Grand Master winner John Heyes. Martin Hughes took the Great Grand Master title and Howard Sellars the Legend.

As every race was won by an Under 23 sailor, the Travellers Trophy was always going to be claimed by one of them. True to form the persistence and consistency of Cameron Tweedle gave him the title for the second year in succession.

Another fantastic event with excellent conditions and superb race management ended the season for the British Finn Association on a real high note. Next year’s calendar with even more events is now being planned and will be available on the event 2018 calendar soon.