Henry Wetherell clinched his first Finn national title at Mengeham Rythe SC on Sunday after only one further race was possible.
British Sailing Team member Wetherell also took the U 23 title, ahead of GAC Pindar U 23 Cameron Tweedle in second with Grand Master Graham Tinsley third.

An impressive 58 entries underlines the growing strength of the UK Finn fleet with 10 U23 sailors taking part. In recent years the British Finn Association with sponsor GAC Pindar has supported an U23 squad with grants and training, and four of those were among six U23 sailors in the top 10.

The weather for the first two days was characterized by a glorious sunshine with a moderate north-easterly breeze, which gradually  switched to a sea breeze mid afternoon. 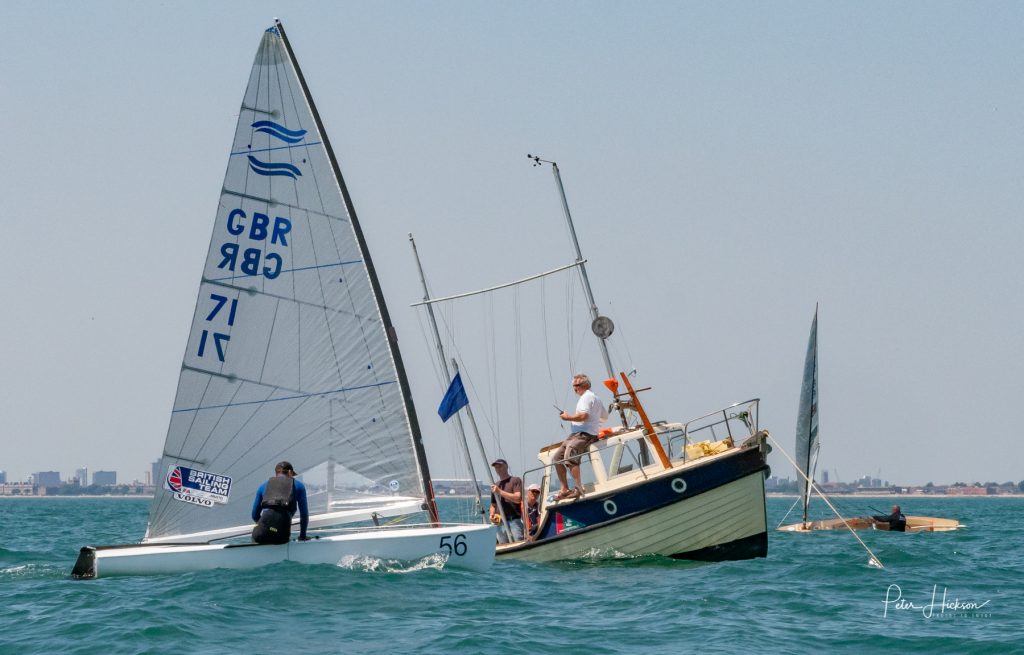 Wetherall got off to a good start with a confident win in Race 1, a race that survived several protests after some leeward gate confusion. The second race of the day was abandoned on the first downwind when the sea breeze switched the breeze 90 degrees. With no more time to restart the race before the water ran out at the club, the fleet was sent home for the day.

Defending champion, Hector Simpson won two races on Saturday, but a retirement in Race 1, with gear problems, and a 33rd in Race 3 left him in 10th overall.

The first race on Saturday was sailed in a diminishing north-easterly, with Simpson leading throughout. Tweedle led for most of Race 3, but the sea breeze switched on the second upwind, which caught many unawares and the race order was largely turned inside out. Those who stayed on the right were rewarded with a straight course to the finish, while those on the left were wanting. The race went to former champion Julian Smith, while most of the leaders picked up a high score.

The final race was sailed in the building sea breeze with Oscar raised for free pumping at the second top mark. Simpson took his second win of the day, but still had too much to do to retain his title, though the wind had been tricky enough not to count out anything!

After a wonderful 4 course championship dinner served up by the club on Saturday night, the final day of the GAC Pindar British Finn Nationals was even more tricky for both race committee and sailors than the previous two days. The first attempt at race 5 was abandoned on the second leg after the sea breeze shifted the wind through more than 100 degrees on the first beat. In a similar scenario to Saturday’s race the leading boats were all on the left of the upwind leg, heading towards the stronger pressure off the Hayling  seafront. They then tacked onto the Port lay-line and when the leaders were 500m from the mark found themselves becalmed and forced to watch the back end of the fleet reaching into the mark with the sudden southerly sea breeze. At that point Tweedle was in a winning position with Wetherell near the back but the abandonment saved him from a high points score. 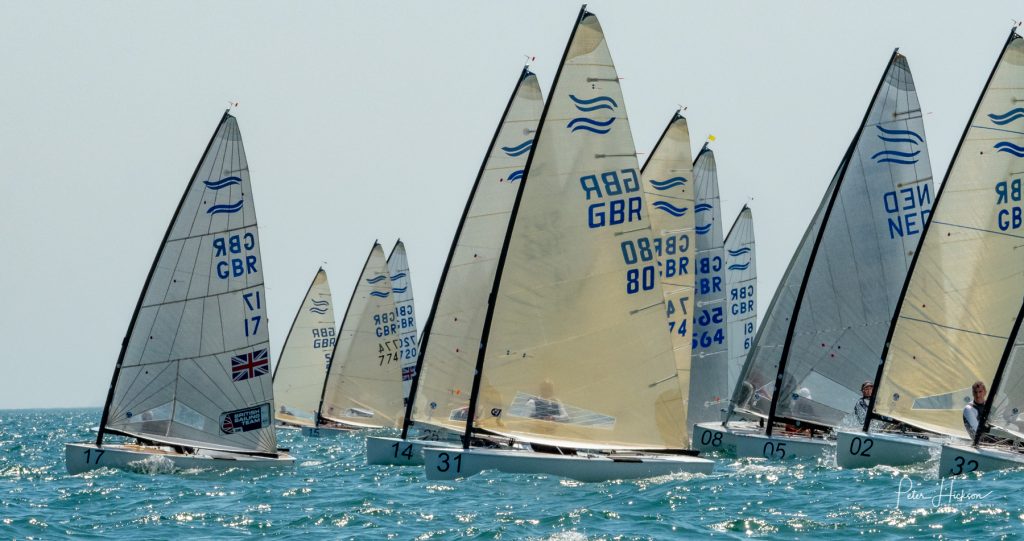 After a wait for the feeble sea breeze to establish the restart under a black flag was all about getting out to the right hand side of the course. Pressure came in half way up with double champion Allen Burrell leading the group on the right round the top. Starting just down from the Committee boat he tacked off to the right and headed for the Isle of Wight. Keeping his conviction that the sea breeze would build to the south, Burrell went furthest right, ignoring the temptation to tack back on the feeble shifts to the left. He just held on downwind and then extended up the second beat by again heading hard right as the wind died to almost nothing. The course was shortened at the second top mark with Burrell taking the gun, Finn newcomer but top singlehanded sailor Andy Couch claimed second and Wetherell third – fighting back from an average start, which turned out to be enough to win the championship. 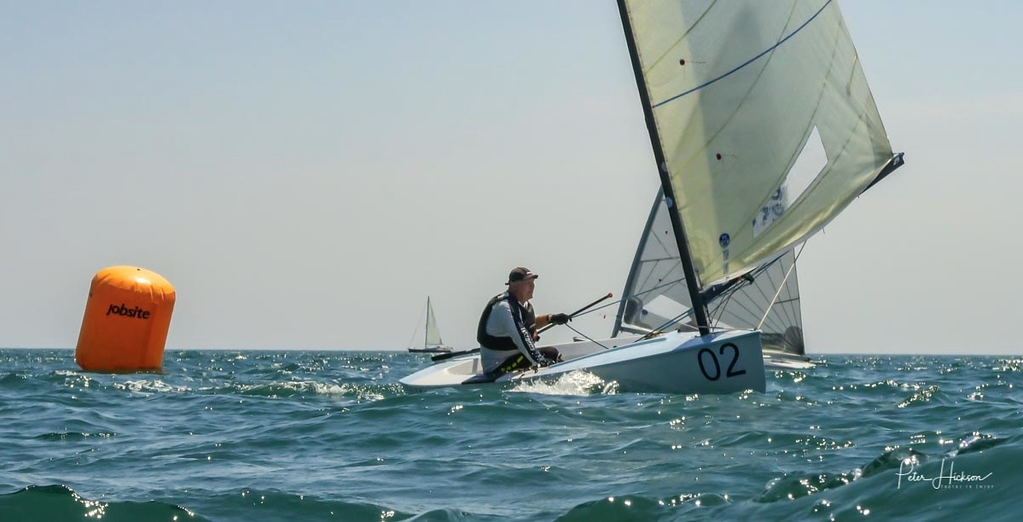 It was impressive to watch Wetherell’s technique downwind in the fickle breeze. With the tide taking the fleet right to left and with the stronger pressure on the left there was a  danger of being swept too far left of the downwind gate. As he approached the gate, Wetherell somehow managed to slide his boat to the right, seemingly sailing by the lee, whilst still managing to stay on the favoured port gybe.

The fleet waited afloat for another hour in the hope that the sea breeze would return but it was to no avail and at about 1600 the fleet was finally towed home. 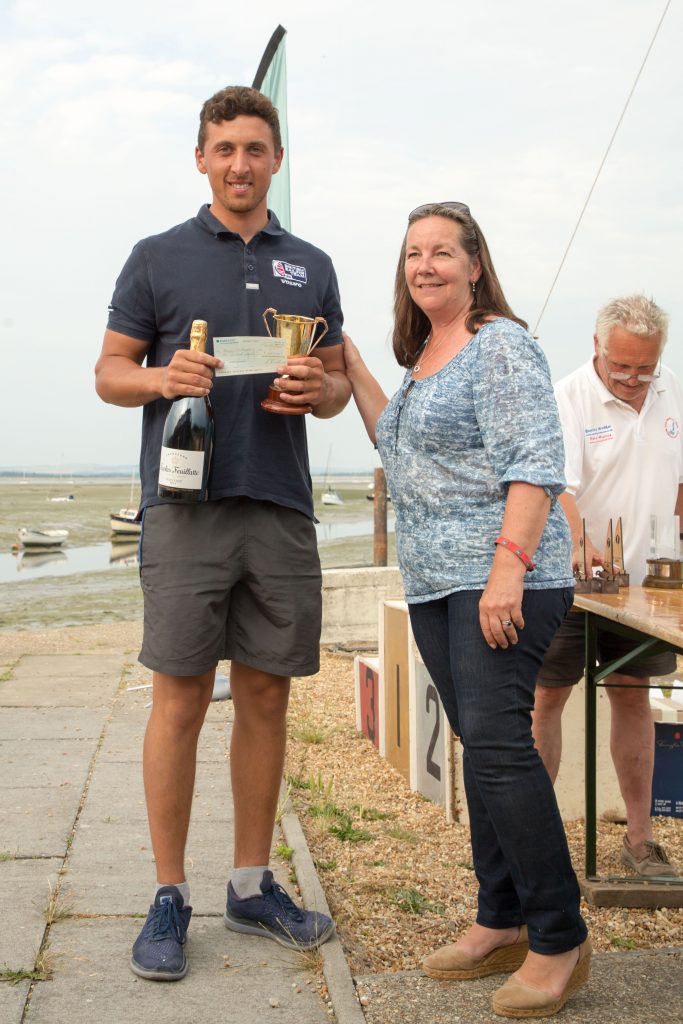 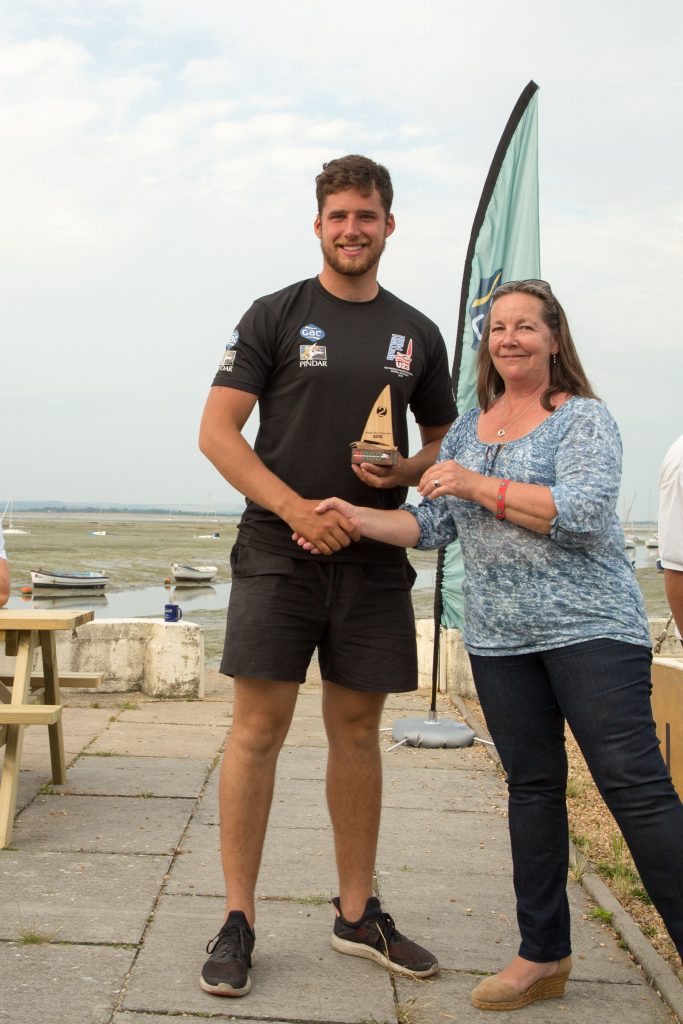 Henry Wetherell only took one race win across the championship’s tricky weekend, but his consistent scoreline of 1,2, (12) 2, 3, saw him take the title by an impressive 13 points, Everyone had one nightmare result when the race went inside out but it takes maturity to keep a calm head and recover as much as possible. With the high temperature and thermal instability it was always going to be a tough job for the race team, but PRO Robert Macdonald did a sterling job in getting as many races as were humanly possible out of the weak and un-predictable breeze. 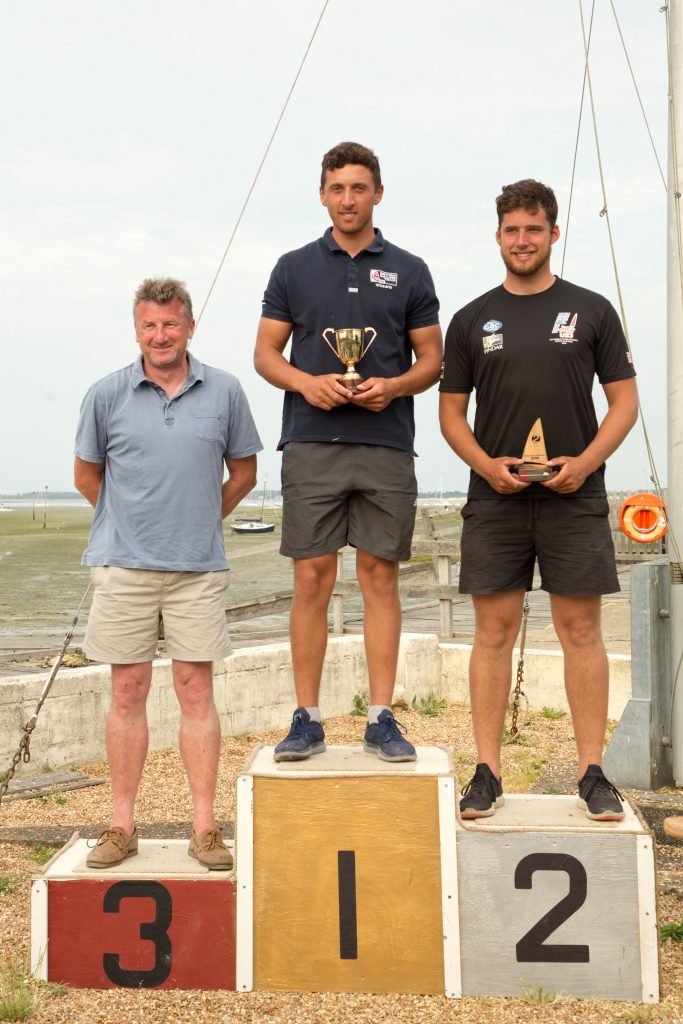