Defending world champion Giles Scott (GBR) has taken the lead at the 2015 Finn Gold Cup after winning the only race sailed on the second day in Takapuna, New Zealand after light winds disrupted proceedings. Andrew Murdoch (NZL) drops one to second while Ed Wright (GBR) remains in third.

It was a mixed day with several weather changes during the day including some light rain, but the wind also remained light under both black clouds and blue skies.

In his first Finn Gold Cup, André Hojen Christiansen (DEN) led round the top mark from the left, with Ioannis Mitakis (GRE), Alican Kaynar (TUR) and Philip Kasüske (GER) close behind. Mitakis took the lead on the first downwind to lead through the gate and extend up the second beat, rounding ahead of Kaynar and a fast approaching Scott. 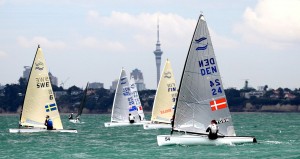 Day 2 at the Finn Gold Cup, with Auckland’s Sky tower in the background.

As the wind got lighter on the final downwind, Scott closed up to the left of Mitakis and gained the inside overlap at the final gate to take the lead on the short leg to the finish to win the race. Mitakis crossed in second with Zsombor Berecz (HUN) passing Kaynar for third. The biggest gains went to Pieter-Jan Postma (NED) who had rounded the first top mark around 25th and gained on each leg to cross in fifth, just behind Deniss Karpak (EST). 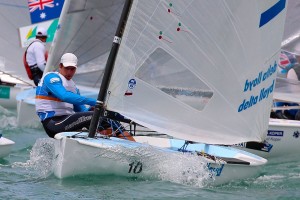 The wind was never particularly strong, topping out at around 8-9 knots, but after the arrival of some dark clouds and rain towards the end of the race, the wind dropped out to 3-5 knots. After the finish the fleet waited afloat for conditions to improve enough to be able to start race 4, but an hour later the Race Committee sent the fleet ashore for the day.

Many battles are being fought out this week, not just for the World title but also for Olympic selection and for the four precious Olympic places.

Max Salminen (SWE) is battling with yesterday’s race winner Björn Allanson (SWE) to be the Swedish rep in Rio. Salminen said, “We all want to aim for the best result possible and we try not think about it too much, just focus on the regatta and take it from there. We don’t have a qualification that is based on maths so it’s all aboutproving yourself as good as possible and you can’t really do anything tactical.” 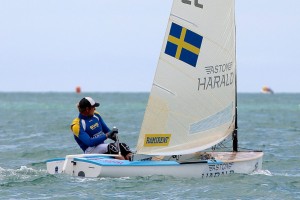 After three races Scott has taken the lead. He said, “The forecast was pretty bad early on and they did a good job getting us out there on time and getting one race in before the rain killed what little breeze there was. So that was a good thing. And I managed to come away with a victory which put a good spin on it for myself, so I am happy with how today went.”

On taking the lead from Mitakis. “We were overlapped from about 40 boatlengths. I had been sailing reasonably well downwind. There was a bit of a left shift in the breeze and I managed to soak down in the breeze and he didn’t early on and that brought me right up to him and from there I just protected the inside down to the gate, which worked well for me. The breeze was light and quite flicky with a long phase but generally there were little gains here and there to be had, which I managed to do quite well up the second beat which brought me to the front of that chasing pack.”

On his event strategy, “I think you have to take it race by race and every race so far has gone well and you can’t complain sitting at the top of the leader board, but there’s a long way to go.”

Parkstone Yacht Club’s Ed Wright remains on course to claim yet another Gold Cup podium position with a solid 10th in the highly competitive 76 boat fleet and the ever improving Ben Cornish scored a 24 to remain in contention for the medal race, in 12th spot.

Three races are now scheduled for Thursday to try and catch up with the programme.